In 1993, after sales commenced for the first generation S140 series, development began on the successor under the internally known codename JZS160. The design process began under chief engineer Yasushi Nakagawa in May 1994 and by November 1995 after 18 months of design work, the final production design was approved by the executive board. In January 1997, Lexus debuted the "High Performance Sedan" (HPS) concept at the Detroit Auto Show, previewing the design direction for the redesigned GS. In August 1997, the second generation Toyota Aristo was launched in Japan, codenamed JZS160 (S300 version) for models with 2JZ-GE engines and JZS161 (V300 version) for those with 2JZ-GTE twin-turbocharged engines. VVT-i was now standard, resulting in an increase of torque. The twin-turbocharged version was available with electronic four-wheel steering, VSC electronic stability control and an automatic transmission with a manual sequential mode. Toyota discontinued the optional all-wheel drive system.

The second generation sedans used a new front-engine, rear-wheel drive midsize platform, also featured in the Japanese-market Toyota Crown. The new model's styling was produced in-house, and featured quadruple headlights in a fashion similar to the Lexus SC coupe. The drag coefficient was 0.30 Cd. Inside, electroluminescent Optitron gauges were offered for the first time, along with an upgraded stereo system. For export markets, the second generation GS began production in the JZS161 body style on August 4, 1997 and was officially launched in late 1997.

The GS was Motor Trend's Import Car of the Year for 1998. It also made Car and Driver magazine's Ten Best list for 1998 through 2000. In IIHS frontal crash testing the 1999 and newer GS was given a "Good" overall score.

In 2000, a facelift (designed in mid-1999) was introduced for the 2001 model year, which was the only year with any major changes in the second generation GS. New clear tail lights with turn signal indicators were added to the trunk area, as well as a slightly revised grille and very subtly tinted headlights on the front end. Xenon high-intensity discharge headlights were now standard on the V8 and optional on the straight-six. Inside, more wood trim was added, and steering wheel shift buttons were now also featured on the GS 300. The V8 engine also received a 0.3-liter bump in displacement and the model was renamed GS 430 (UZS161). Peak power was unchanged, but torque increased to 441 N·m (325 lb·ft). The GS 430 took 6.7 seconds to do 0–60 mph (0–97 km/h). For the 2001 model year, Lexus also added a limited production GS 300 "SportDesign" edition for North America, featuring the sport suspension from the GS 430, wider wheels, and polished alloy wheels. The SportDesign interior added perforated leather upholstery along with brushed aluminum and dark stained walnut trim. For summer 2001, production of the GS 300 SportDesign was limited to a run of 3,300 units (vs. 25,000 annual GS sales annually). Production of the limited model occurred through 2004. 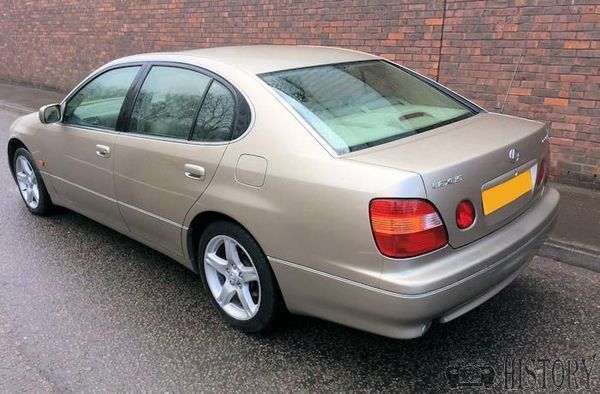