In the early 1990s, following the début of Lexus, automotive press reports indicated a forthcoming mid-size Lexus coupé to compete with the luxury coupés of other marques like Mercedes-Benz SL, Acura Legend coupe and Infiniti M30 coupe. At that point, Toyota had no genuine luxury coupés in its model range. A coupe would complement the successful Lexus flagship model, the V8-powered, rear-wheel drive LS 400 sedan. The coupé was going to be targeted towards the American market, and the development effort for its exterior design was handed over to the Calty Design Research center in California in 1987.

The American Calty design team took a different approach to designing the car, using plaster molding shapes to design the body, and working three-dimensionally instead of the traditional 2-D sketch approach As described by design chiefs Denis Campbell and Erwin Lui, the result was a car that was based on "emotion and feeling" rather than linear aesthetics. The resulting design possessed almost no straight edges, and produced a drag coefficient of Cd=0.31.The final design by Lui was approved in 1989, resulting in Lui being sent back to Japan for 4 months to finish the car. According to automotive journalist Bill Russ, the SC design was considered influential among automotive designs of the time.

Production of the Soarer started in April 1991 at the Motomachi plant in Toyota, Aichi,with the Lexus SC produced alongside the Soarer at a second Higashi Fuji plant at Susono, Shizuoka. Motomachi-sourced cars lasted until April 1997. 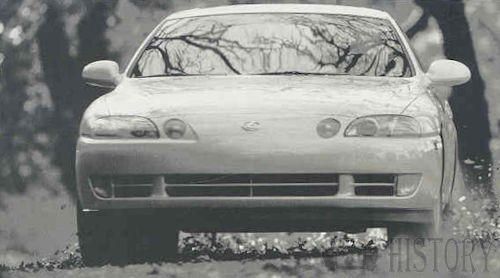 By the end of the decade, North American SC sales began dwindling due to the lack of significant design updates since the car's introduction and marketplace changes that led to loss of interest in coupes.

Sales of the automatic transmission SC 300 and SC 400 models formed the vast majority of models purchased. The Lexus SC 400 was never officially sold in the British Isles, but many examples found their way across the Atlantic as personal imports. The first-generation SC coupes were assembled at Toyota's Higashifuji Technical Center in Motomatchi, Japan.

In 2006 the SC 430 was entered in the (Super GT) race series in the GT500 class (cars with approximately 500 horsepower). Extensively modified from the factory car, the engine used is a modified version of the SC 430's 3UZ-FE V8 that was also used in the Toyota Supra race car from previous years.

The new SC 430 based race cars were immediately competitive with former GT500 champion Juichi Wakisaka and no. 2 driver André Lotterer driving the Open Interface TOM's SC to victory at the opening round at Suzuka giving the SC 430 its first victory on its debut race. Juichi Wakisaka and Andre Lotterer also won the GT500 class championship during the same year. In 2007, Lexus SC fully replaces Supras in the Toyota side, a Zent Cerumo SC 430 driven by Yuji Tachikawa was victorious in the GT500 opening round race.

In 2009, the Lexus Team Petronas TOM's SC 430 driven by André Lotterer and Juichi Wakisaka was the championship winner in the GT500 series, also the SC 430 was victorious in early rounds at the Suzuka Circuit. In 2010, the SC 430 continued in Super GT competition, where the MJ Kraft SC 430 and other Lexus Team Kraft SC 430s won victories at the 2010 Autobacs Super GT at Fuji Speedway.

In 2012, two years after production had ended the 430 continued to be a force in Motorsports. Namely in Formula Drift with the Achilles Radial Lexus SC430 powered by a 2JZ and piloted by Daigo Saito.