The idea concept behind the RX—a crossover between a luxury sedan and SUV—started in the spring of 1993 when it was hypothesized by TMS and Toyota Motor executives. In 1994, that vehicle was officially proposed by TMS executives at product planning meeting in Toyota City, Japan and put into development. In December 1995, the final design directed under designer Makoto Oshima was approved for production, and prototypes later went into testing in early 1997.

Prior to the RX public debut, a concept sport utility vehicle, the SLV, previewed the model at the Chicago Auto Show on February 9, 1997. The SLV name stood for Sport Luxury Vehicle. The production-ready concept combined the characteristics of an SUV, wagon, and sedan, and featured high-ground clearance and an elevated seating position. The concept's overall design intent was to be commonly used for suburban driving. At the debut of the concept vehicle, it was reported that the crossover was to be based on the ES 300 sedan, and would go into production with an entry-level price of over US$30,000. 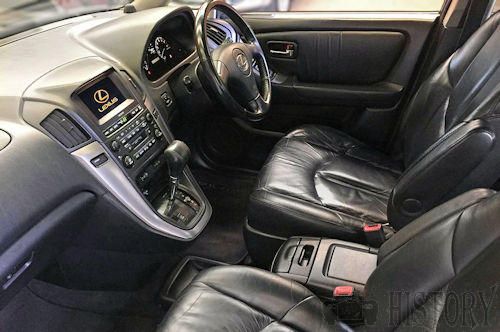 The RX was built on a unibody chassis. Its exterior design was not typical of existing four-door vehicles at its introduction. Among design features, the vehicle featured front triangular quarter-windows, door-mounted side mirrors, a rear liftgate with top-mounted spoiler, and translucent front and rear light covers with round lenses. The exterior color scheme was two-tone, with the bumper and lower body-side cladding a gray color.The RX 300 carried a drag coefficient of 0.36 Cd. The first-generation Lexus RX was built in Kyushu, Japan.

Introduced in Japan in December 1997 along with V6 powered versions, the four-cylinder powered Toyota Harrier was available in front-wheel drive (SXU10) and all-wheel drive (SXU15) form. The 2.2 L 5S-FE I4 produced 102 kilowatts (137 hp) JIS and 191 N·m (141 lb·ft) of torque. Both models were fitted with a 4-speed automatic transmission. The Japanese-market Toyota Harrier could be optioned with JBL sound system, sport seats, and a leather steering wheel. The Harrier found success in the Japanese market, and was also shipped as grey imports to right hand drive markets in Asia and Canada.

The V6-powered model was available in front-wheel drive (MCU10) and all-wheel drive (MCU15) form, which comprised all RX 300 sales in export markets from March 1998 to 2003, and Harrier V6 sales in Japan from 1997 to 2003. The 3.0 L 1MZ-FE V6 was rated at 164 kilowatts (220 hp) and 301 N·m (222 lb·ft).The transmission, a 4-speed automatic unit, offered a "Snow" mode which started the vehicle in second gear for better traction in adverse weather conditions. For the RX 300, a 240-watt, 7-speaker Pioneer sound system was standard, while a premium Nakamichi customized sound system was available as an option. Interior features further included Walnut wood trim and an optional in-dash six-CD changer. The overall RX 300 concept, which directed SUV qualities to an on-road vehicle, was based on market research which found that merely 7 percent of SUV owners drove off-road. The RX 300 interior featured leather trim, two rows of seating, and a rear cargo area which could be concealed beneath a tonneau cover. The center dashboard was dominated by a central liquid crystal display (LCD) multi-information screen for audio, climate, and performance data, along with a U-shaped wood trim piece and a pair of air conditioning vents. The gear shift was mounted at the base of the center console, thus leaving open space below for additional storage space, legroom, or movement to the passenger-side seat. The rear seats could be adjusted forward and back, as well as fold flat for increased cargo room. Total cargo volume with the seats folded was 130 cu ft (3.68 m3).

The basic equipment lacross all versions of the Lexus RX 1998 to 2003.

In 2000, the RX 300 was refreshed with revised headlights and taillights, along with the option of high-intensity discharge (HID) headlamps. The interior also gained the option of a DVD-based navigation system. A burgundy exterior color, Venetian Red Pearl, was also offered on 1999–2000 year models.

In November 2000, the 2.2-liter 5S-FE engine in the Harrier was replaced by the 2.4-liter 2AZ-FE four-cylinder engine, producing 117 kilowatts (157 hp) JIS and 221 newton metres (163 lb·ft) of torque. As before, the engine was offered with either front-wheel drive (ACU10) or all-wheel drive (ACU15) versions. A small facelift was also performed on the Harrier. Options included sport-tuned suspension and DVD voice navigation.

In 2001, a limited edition "Silversport" was offered that included a monochromatic paint scheme in Millenium Silver or Black with an all black interior and perforated leather seats. Exclusively for 2002, Lexus introduced the limited RX 300 "Coach Edition," featuring perforated leather trim in the interior, honeycomb grille, Coach badging on the exterior and interior, and a set of Coach luggage.

Awards won by the first-generation Lexus RX include most appealing luxury SUV by J.D. Power and Associates in 1998, Motor Trend Sport/Utility of the Year for 1999, Money magazine's Best Deal on the Road in the SUV class in 1999, and Kelley Blue Book's Best to Hold Value Award in 1999, 2000, and 2001.

The RX 300 sold over 370,000 units in its five years on the market. It was successful in terms of sales, and became the best-selling Lexus model shortly after its introduction. Its popularity contributed to the growth of the premium crossover SUV market, with several rival makes launching competing models in response to the RX 300. 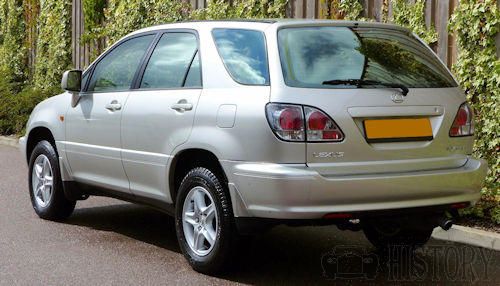