Lexus introduced the GX 470 at the North American International Auto Show in January 2002 as a 2003 model, with sales commencing in November 2002. The GX development program began in 1999 following the J120 Toyota Land Cruiser Prado in 1997, with design work by Shoichi Fujiyoshi concluding in the first half of 2000. Heavily based on the Toyota Land Cruiser Prado (J120), the GX and Prado shared a common platform, mechanicals, and bodyworks (except front-end), so therefore had common basic dimensions. Likewise, the interiors were much the same, with the Lexus receiving further premium touches when compared to the Toyota-badged version. Like the Prado, the GX design incorporated welded steel body-on-frame construction, an electronically controlled five-speed automatic transmission, and permanent four-wheel drive with a center locking Torsen differential. The suspension shared its layout with the Toyota 4Runner equipped with the rear air suspension, while adding Adaptive Variable Suspension (AVS) and Downhill Assist Control (DAC). AVS could adjust damper firmness continuously while DAC modulated descents down slopes. Power came from a 4.7-liter, 32-valve, four-cam 2UZ-FE V8 engine originally rated at 175 kW (235 hp) at 4,800 rpm and 434 N·m (320 lb·ft) of torque at 3,400 rpm. Towing capacity was rated at 2,300 kg (5,000 lb) for the 2003 model year.Midway through the 2004 model year, the GX received an upgraded towing capacity of 2,900 kg (6,500 lb) with the addition of a much stronger frame-bolted tubular hitch. Ground clearance measured 211 millimetres (8.3 in), with an approach angle of 30° and a departure angle of 29° raised (25° normal). The GX 470 carried a drag coefficient of Cd=0.38.

The interior came equipped with two rows of seating, while an optional third row allowed up to eight passengers to be carried.However, the folding third row was tight with only 610 mm (24 in) of legroom. A Mark Levinson audio system along with a Rear Seat Entertainment System were available as options.A side-opening rear tailgate was standard.

In 2003, for the 2004 model year, the GX 470's transmission was upgraded to a sealed unit with no dipstick. An optional Kinetic Dynamic Suspension System (KDSS) became available as a late-year addition. KDSS freed and adjusted the vehicle's stabilizer bars for greater articulation allowing the wheels to move with less restriction over uneven terrain, and used front and rear hydraulic pressure-sensing valves and larger stabilizer bars to reduce body roll during on-road conditions. Safety upgrades for 2004 included a roll-sensing feature for the side curtain airbags, a tire pressure monitoring system, and an optional rear backup camera system.

In 2004, for the 2005 model year, the GX 470's engine gained 26 kW (35 hp) with the addition of VVT-i for a total of 201 kW (270 hp). This allowed the SUV to be certified as an Ultra-Low Emission Vehicle II (ULEV II) in the U.S. Other upgrades included an enhanced navigation system, Bluetooth compatibility, and more voice commands. A Sport model joined the lineup, including the Kinetic Dynamic Suspension System and different styling such as smoked bezel headlamps, added chrome trim, and black bird's eye maple wood.

In 2005 for the 2006 model year, changes in SAE engine testing procedures resulted in a slight drop in the amount of stated power for the V8 to 196 kW (263 hp), and Lexus Link telematics was offered in North America.For 2007, the GX 470 was largely unchanged, with upgrades for cabin electronics including a new generation navigation system, auxiliary input jack for devices like an iPod, DVD video playback when parked, and larger optional rear entertainment video screen.

The Lexus GX has won various awards including "Four Wheeler of the Year" in 2003 and 2004 from Four Wheeler Magazine, and Automobile Magazine All-Star for 2003 in the Mid-Size Sport-Utility category. J.D. Power and Associates named the GX 470 the highest ranked premium luxury SUV in initial quality in 2005, and Kelley Blue Book gave the GX 470 its Best Resale Value Award in 2006. 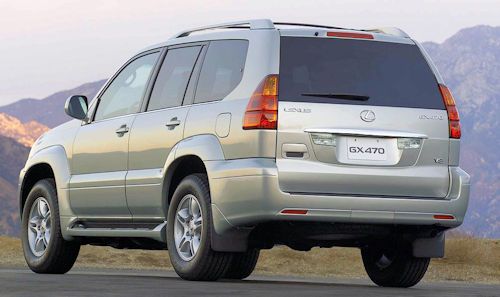