The Lexus GS is a mid-size luxury car sold by Lexus, the luxury division of Toyota. It was sold as the Toyota Aristo in Japan from 1991 until the release of the third generation in 2005. Designed as a performance sedan competing in the mid-luxury class, the GS slots between the entry-level/compact executive IS and full-size/flagship LS, and shares its chassis with one of Toyota's longest-running platforms: the S-series which has been used under multiple generations of the Toyota Crown premium sedans.

The first-generation Lexus GS began sales in the United States, Europe and selected markets in Asia in 1993, where it was introduced with an inline-6 engine and exterior bodywork designed by Italdesign Giugiaro. The second-generation model premiered in 1997, using a new platform, in-house styling, and adding a V8 version for the first time outside Japan. The third-generation GS, which premiered globally for the 2006 model year, was produced in V6, V8, and hybrid versions, the latter known as the GS 450h performance hybrid. The third-generation models were the first GS sedans to be sold domestically in Japan.

Four generations of the GS have been produced since 1993, each available with six-cylinder engines and rear-wheel drive. V8 engines were offered in the second and third generations, and all-wheel drive and hybrid versions debuted in 2005. The first two generations had a Japanese domestic market equivalent, the Toyota Aristo ("Aristo" is Greek for "the best"), which was sold from 1991 until the Lexus marque's domestic debut in 2005. Though largely identical in exterior and interior design, the GS and the Aristo differed in their engine and transmission combinations as well as equipment packages. The GS name stands for Grand Sedan.However, some Lexus importers use the backronymic name, Grand Sport.

Italdesign Giugiaro began the first design drawings of the GS 300 in 1988. The design firm aimed to produce a deluxe saloon which did without the numerous exterior features and detailing found on existing Japanese premium sedans, in favor of a more simplified, European-style appearance. The vehicle's exterior styling blended elements of the then-current Lexus LS flagship and SC performance coupe in a rounded, aerodynamic wedge-like shape which featured a high rear decklid and longer and wider proportions than rival vehicles. The exterior produced a drag coefficient of 0.31 Cd. The offered color schemes included single-tone bumper and body finishes, along with dual-tone schemes. Similarities with an Italdesign concept car which debuted in 1990, the Jaguar Kensington, led some observers to suggest that the GS 300 was derived from its design, but the firm has stated that the GS 300 was developed earlier. Equipped with an independent, double-wishbone suspension setup at both front and rear ends, Italdesign's saloon design first appeared in Toyota Aristo form in Japan in October 1991.

Built at Toyota's Tahara assembly plant in Japan, production of the Aristo involved more automation than previous vehicles built at the Tahara factory; robots performed 4,200 welds on each body, while only eight spot welds were performed by hand. Toyota of Japan offered two straight-six engine options for the Japanese market Aristo—the 3.0 Q and 3.0 V. The 3.0 Q (JZS147) featured the 2JZ-GE engine which produced 169 kW (227 hp), while the Aristo 3.0 V (JZS147) was equipped with a 24-valve twin-turbo 2JZ-GTE engine which produced 205 kW (275 hp). The Aristo was exclusive to the Toyota Vista Store as the top level luxury sedan at Vista dealerships, positioned above the Toyota Cresta and Chaser. In 1992, a third model, the V8-powered 4.0 Zi-Four (UZS143), joined the Aristo lineup. This model came with standard all-wheel drive and a 186 kW (249 hp) 1UZ-FE engine.

For the interior, the GS 300 featured walnut wood trim on the center console, leather seating, an automatic tilt-and-telescoping steering wheel, and the option of a Nakamichi premium stereo system. Driver and front passenger airbags were standard A moonroof, remote 12-CD auto changer, and traction control (TRAC – left hand drive vehicles only) were options.

The GS was intended to take the price position of the original LS 400 flagship, which had moved upmarket since its 1989 launch. By the time of the GS 300's debut, the US$35,000 initial base price of the LS in the United States had climbed to US$47,000, while the GS 300 at debut carried base price of US$38,000. However, sales of the GS 300 were modest, with 1993 seeing the greatest sales at 19,164 sold that year. Sales dropped in later years as the Japanese yen rose in value against the dollar and made the vehicle more expensive than its rivals Additionally, more powerful V8 sport sedans provided strong competition. By 1997, the price of the GS 300 had risen to US$46,000. Production of the first generation GS sedan ended in late 1996. 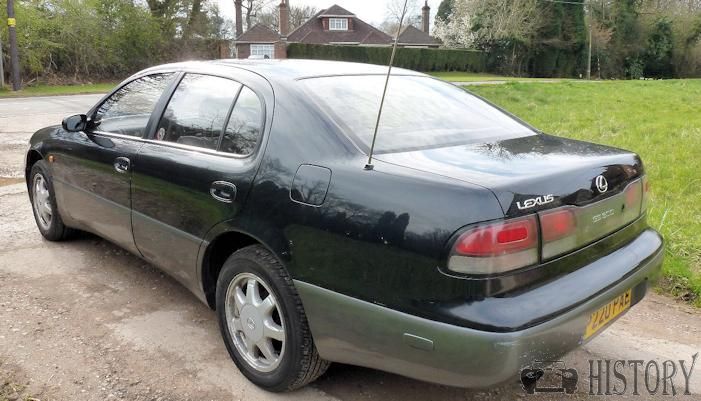