The third-generation Lexus LS 430 (UCF30) debuted at the North American International Auto Show in January 2000 as a 2001 model, introducing a new body design and a host of new interior and technological features. The sedan was equipped with a new 4.3 liter 3UZ-FE engine generating 216 kilowatts (290 hp) and 434 newton metres (320 ft·lbf) of torque. The standard suspension had been completely redesigned, with a double-wishbone setup at all four wheels; a Euro-tuned suspension was offered for the first time. A new torque-activated electronic control unit made throttle adjustments based on vehicle speed, engine revolutions per minute, and pedal position. The LS 430 sported a 0–100 kilometres per hour (62 mph) acceleration time of 6.7 seconds. Sales began in October 2000 in the U.S.

Heading into the planning of the LS 430, division executives concluded that the previous LS redesign had been too restrained in its approach. The LS 430 development team, led by chief engineer Yasushi Tanaka, accordingly opted for a more thorough exterior, interior, and technological redevelopment. The development of the LS 430 took four years. Selected from 16 different concept designs, the resulting vehicle of December 1997—when the final design was approved—saw the sedan's dimensions increase in terms of wheelbase and height. The exterior featured a larger grille with rounded edges, quarter windows on the rear doors, and rounded trapezoidal headlamps. The body was also more aerodynamic than previous LS sedans (Cd 0.26; 0.25 with air suspension), and was the product of wind tunnel testing at facilities used for Shinkansen bullet train development. A 76 mm (3.0 in) wheelbase stretch resulted in more interior volume and allowed the engine to be positioned further aft for better balance Trunk space was increased by one-third due to repositioning of the fuel tank.

Compared to previous generations, the LS 430 featured a greater number of model configurations and options. While sharing the same body style, variants were differentiated by chassis configuration and onboard equipment. Models with the Euro-tuned sport suspension, sold as the "Touring" package in the U.S. featured larger, high-speed brakes. These brakes were also standard on European market models. Fully optioned models with height adjustable air suspension, tuned for a combination of soft ride and responsive handling, were sold in the U.S. as the "Ultra Luxury" edition. 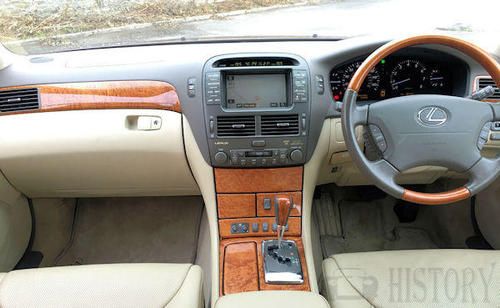 The LS 430 first went on sale in the U.S. with an initial base price of US$55,000, ranging up to US$70,000 when fully equipped. At the high end, the LS 430's pricing encroached on European rivals as Lexus became increasingly able to command higher price premiums for its vehicles. Sales for the LS 430 surpassed the previous generation, and production exceeded 140,000 units. The LS 430 was produced until July 2006, marking the last occasion the Lexus flagship was produced in a single body style. In Japan, the equivalent Toyota Celsior was also sold until 2006, when the long-awaited introduction of Lexus Japan saw the arrival of new generation Lexus models.

In every year of production, the LS 430 was the most reliable luxury sedan in the J.D. Power and Associates Initial Quality Survey (with the early and late models of this series the best performing), and the highest recorded scorer in the history of J.D. Power's Vehicle Dependability Survey. Thatcham ratings data via the UK Motor Insurance Repair Research Centre listed the theft-prevention capabilities of the LS 430 as a maximum 5 stars, with the LS 430 being the first automobile to achieve the maximum theft-deterrence rating in 2001.

Designed throughout 2002, the LS 430 update debuted in September 2003 as a 2004 model, introducing a new six-speed automatic transmission and revised styling. The powerplant remained the same as before. Exterior changes included restyled front and rear fascias, redesigned adaptive headlights that swiveled the projector headlamps in the direction of vehicle turns, light-emitting diode (LED) taillights, and different wheels. The interior received knee airbags, lighted rear-seat vanity mirrors, and new trim selections, including bird's eye maple wood. New options included an updated navigation system, Bluetooth, a backup camera, and a pre-collision system. A driver-programmable electronic key feature allowed the vehicle to detect the key fob in the owner's pocket and unlock the doors by touch.