Produced as a direct competitor to the luxury sport sedans of the leading European luxury marques, the XE10 series Toyota Altezza and Lexus IS was designed with a greater performance emphasis than typically seen on prior Japanese luxury vehicles. The engineering work was led by Nobuaki Katayama from 1994 to 1998, who was responsible for the AE86 project. At its introduction to Japan, it was exclusive to Japanese dealerships called Toyota Vista Store, until Lexus was introduced to Japan in 2006. The AS200 and AS300 Altezza sedans formed the basis for the Lexus IS 200 and IS 300 models sold in markets outside Japan, primarily North America and Europe. A hatchback-station wagon version was sold in Japan as the "Altezza Gita", and in the US and Europe as the Lexus IS SportCross. Overall, the XE10 came in three variants: 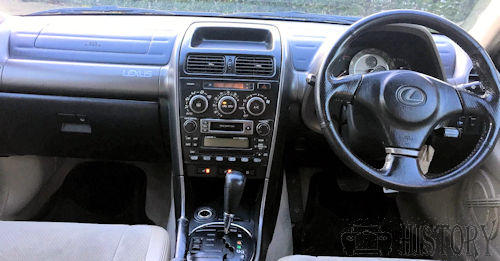 The design received critical acclaim at its 1998 launch, and was awarded Japan's "Car of the Year" honor for 1998–1999. A few months later, Lexus began marketing the IS 200 equivalent models in Europe.The IS 200 in Europe was listed as producing 153 brake horsepower (114 kW), with a top speed of 216 kilometres per hour (134 mph), and 0 to 100 kilometres per hour (0–62 mph) acceleration in 9.3 seconds.The styling cues of the rear light clusters on the first generation models were copied by a number of after-market accessory manufacturers for applications on other vehicles. This iconic style of one or more internal lamp units, covered with a clear (or tinted) perspex cover made popular by Lexus, became known in many circles as 'Lexus-style' or 'Altezza lights'.

In 2000, a hatchback/station wagon model, the AS300 (chassis code JCE10), was introduced featuring a 3.0-liter 2JZ-GE inline-six engine. Equipped with rear- or all-wheel drive (JCE10, FR Gita Wagon; JCE15, 4WD Gita wagon), the AS300 featured a five-speed manual, or five-speed automatic for the FR Gita wagon and a four-speed automatic for the 4WD Gita wagon. The six-cylinder version (2JZ-GE) was only available in Japan on the Gita models. In the US, the IS 300 sedan debuted in 2000 as 2001 model and the wagon debuted in 2001 as a 2002 model with the same 3.0-liter six-cylinder engine (the 2.0-liter six-cylinder was not available), while in Europe, the IS 300 joined the IS 200 in the model lineup. All IS 300 models in the US were initially only available with the five-speed automatic transmission; this was also the case in Europe. However, a 5-speed manual was made available in the U.S. in 2002. Visually the exterior of the European IS 200 Sport and 300 were almost identical, the only differences being the boot insignia and the larger engined model initially having clear front indicators (later generalised to IS 200 range).

The first generation IS interior featured unique elements not typically found in other Lexus models. These included a chrome metal ball shifter, pop-up navigation screen, and chronograph-styled instrument panel (with mini gauges for temperature, fuel economy, and volts). For the European market, the IS 300 gained full leather seats rather than the leather/ecsaine of the 200, plus auto-dimming rear view and side mirrors, and HID headlamps. In the US, the Environmental Protection Agency listed the IS 300 as a subcompact car; although it technically had enough overall volume to be called a compact, rear seat room exhibited subcompact dimensions.

The U.S. National Highway Traffic Safety Administration (NHTSA) crash test results in 2001 gave the IS 300 the maximum five stars in the Side Driver and Side Rear Passenger categories, and four stars in the Frontal Driver and Frontal Passenger categories.The Insurance Institute for Highway Safety (IIHS) rated the IS "Good" overall for frontal collisions and "Good" in all six measured front impact categories.

For the first generation IS in the US market, sales hit a high of 22,486 units in 2001; subsequent sales years were less than forecast, and below the 10,000-unit mark in 2004. The IS 200 fared better relative to sales targets in Europe and Asia, while still well short of the sales volume achieved by the Mercedes-Benz C-Class and other, mostly German-made competitors. This trend was indicative of Lexus' smaller global status; while Lexus' range of cars was very successful in North America, the marque's sales lagged behind its German rivals in Europe. In Europe, the lack of a manual gearbox option for the IS 300 may have limited sales in contrast to its rivals, the BMW 3-Series and the Mercedes C-Class.

An official concept model, the MillenWorks-built Lexus IS 430 was unveiled at the SEMA Show in Las Vegas, Nevada in 2003.The IS 430 prototype was an IS 300 fitted with a 4.3-liter V8 from the Lexus GS. Lexus dubbed the IS 430 a one-off with no plans for production. In Europe, Toyota Team Europe (TTE) shoehorned a supercharged 4.3-liter V8 into an IS 300 bodyshell, the result was a 405 PS (298 kW) ECE sedan. In 2000, TTE also released a compressor kit for the IS 200 on the European market. An Eaton supercharger at 0.3-bar pressure boosted the power to 153 kilowatts (205 hp) without sacrificing fuel consumption (+3.3 percent). The kit was initially available as an aftermarket fitment, but could also be obtained as OEM Lexus accessory on new cars through the official Lexus dealer network and was fully covered by the standard warranty. This model variant was discontinued when the IS 300 was released on the European market. 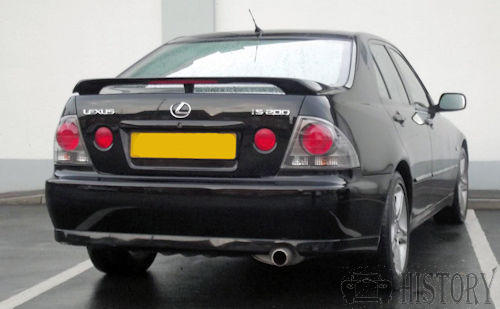