Lea-Francis Sports car.Built: Coventry, England, from 1947 to 1953
After some years in limbo, the Lea-Francis marque was reborn in 1938, around a new twin high camshaft engine designed for them by Hugh Rose. As Rose had been a senior designer at Riley, it was not at all surprising to see that the Lea-Francis engine looked very much like that of the latter-day 1930s Rileys.

Cars introduced in 1938 were re-introduced after the end of the war, but the sports car derivative which made its bow in the autumn of 1947 was not a re-hash of a 1930s model. Its chassis frame was indeed a development of the 1938 frame, but with a wheelbase shortened by 12 inches. At the time it was strictly conventional, with simple half-elliptic leaf spring suspension at front and rear. The engine was a 1496cc version of the Hugh Rose design, rated in oldfashioned terms as a 'Twelve'.

The body style was a peculiar mixture of old and new, for it was coachbuilt in the traditional way, and had a lack of sweep-through lines, yet it had a streamlined grille and recessed headlamps. There were only two seats, and no more than the acceptable minimum of weather protection.

Almost as soon as sales got under way, the engine capacity was increased to 1767cc, by a simple 6mm bore increase, but for the first year at least the oldfashioned chassis was retained. From the autumn of 1948, however, the old frame was given a new torsion bar independent front suspension, which was standardised on all Lea- Francis models, saloon and sporting.

Finally, from the end of 1949, the 1767cc 'Fourteen' engine was joined by the option of a 2496cc 'Eighteen' engine. This, though similar in many ways to the original design, had many detail differences, including the use of a simple duplex camshaft chain drive, and had a bore and stroke of 85 x 110mm. It was also very powerful, producing 100bhp (gross) at 4000rpm, and made the Lea-Francis sports car quite a proposition in rallies of the period, for its maximum speed was about 100mph. Unhappily, Lea-Francis, like other rather impoverished sporting car manufacturers of the postwar period, could spare no resources to develop or replace this model, and when sales fell away they had no choice but to let it die a lingering death. The last of these rugged tourers was sold in 1953, at which point Lea-Francis withdrew from the motor car manufacturing business. Total production was 228 of the smaller engined cars, and very few 2h-litre Lea-Francis cars were built. 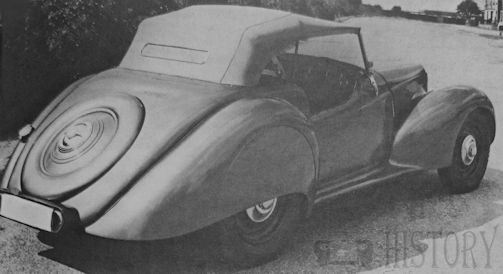