Richard Henry Lea and Graham Inglesby Francis started the business in Coventry in 1895. They branched out into car manufacture in 1903 and motorcycles in 1911. Lea-Francis built cars under licence for the Singer company. In 1919 they started to build their own cars from bought-in components.

From 1922 Lea-Francis had a tie up with Vulcan of Southport sharing manufacturing and dealers. Vulcan supplied bodies to Lea-Francis and in return got gearboxes and steering gear. Two six-cylinder Vulcan designed (and made) cars were marketed as Lea-Francis 14/40 and 16/60 as well as Vulcans. The association finished in 1928 when Vulcan stopped making cars.

A sporting image began to appear from about 1925, leading to models such as the Hyper and the Ace of Spades. The Hyper (also called the S-type) was the first British supercharged production car with a 1.5 litre Meadows engine, and in 1928 a Lea-Francis Hyper won the Ulster TT, a 30-lap race on the 13.5-mile (21.7 km) Ards circuit on the roads of Northern Ireland in the hands of legendary race car driver, Kaye Don. The race was watched by a record 250,000 spectators, and the victory placed Lea-Francis firmly on the map.

The company was re-formed in 1937 under the chairmanship of George Leek with other ex-Riley men such as R.H. Rose who designed a new engine for Lea-Francis which had a similar layout to the Riley 12/4. The 12 hp and the 14 hp (actually 12.9 hp) were introduced in 1937 and continued until the start of the war in 1939 when production ceased and the factory concentrated on manufacturing for the war effort.

Post-war car production commenced in 1946 with updated vehicles based on the pre-war designs. The 14hp Saloon and Sports were luxurious and sporty vehicles, and were popular, if expensive. Eventually an improved chassis with independent front suspension and hydraulic brakes was introduced across the range and in 1950 the 18 h.p. saloon and 2½ litre Sports, both with the more powerful 2½ litre engine, were introduced. Production once again came to a halt in 1954, after not having been present at Earl's Court since 1952.

A number of 14hp Sports chassis were sold to Connaught Engineering where they became the L2 and L3 sports-racing cars. Connaught developed a Formula 2 racing engine for their "A" type single seater which was based on the Lea-Francis design.

The company had a chequered history with some notable motorcycles and cars but financial difficulties regularly arising. The Hillfields site was abandoned in 1937 when it was sold by the receiver and a new company, under a slightly different name moved to Much Park Street in Coventry. It survived there until 1962 when the company was finally wound up.

A total of almost 10,000 Lea-Francis vehicles were made until production ceased due to the 1960 Lea-Francis Lynx's failings to capture the buying public's attention. Only three Lynxes were made, all prototypes. This was a tube framed 2+2 roadster with a Ford Zephyr 2.6 litre inline-six engine. The example displayed at the British Motor show was famously painted in mauve with gold trim.

The motor manufacturing parts of the company passed into the hands of the receiver in 1962, leaving Lea-Francis to continue with their engineering business. The assets of the company were purchased by Quinton Hazell Ltd., a component manufacturer, while the Lea-Francis name was purchased by Barrie Price. Price has continued to provide service and spares for the surviving cars, and has also built a number of retro Lea-Francis motor cars reviving the model name "Ace of Spades." These two-seat coupes have Jaguar engines.

In 1998 it was believed that the Lea-Francis name might yet be seen again on the road when a new Lea-Francis sports car by the name of the 30/230, designed by James Randle, was shown at the Motor Show. Only a prototype was built before the project had to be abandoned. 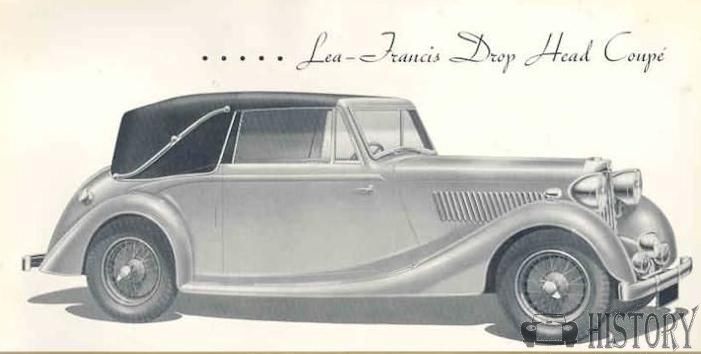