The Discovery 4 (called the LR4 in North America) is an updated version of the Discovery 3. Using the same Integrated Body Frame structure, the new Discovery has altered front and rear light units and a restyled front grille and bumper to adopt the same smoother, rounder style as also adapted for the 2010 Range Rover and Range Rover Sport. The Discovery 4 also retains the body-coloured wheel arches and bumpers as the late D3s (early D3s had black plastic trim). Optional Daylight Running Lamps can be specified whilst LED lamps feature prominently in both front and rear lamp units.

The majority of the changes are mechanical. The D4 receives two engines from Jaguar Land Rover's 'Gen III' range. The TDV6 Gen III is a 3.0-litre development of the 2.7-litre engine used in the D3. The new version features advanced twin-sequential turbochargers where a Variable geometry turbocharger is used at low engine speeds, with a second standard turbo is brought online at higher engine speeds.This system provides greater output than the older engine now 241 bhp (180 kW) and 600 N·m (440 lb·ft) whilst reducing CO2 emissions by 10%. The Gen III version of the V8 petrol engine (available in markets outside the UK such as North America, Russia, Australia, and some EU countries) is now a 5-litre unit with Direct Petrol Injection developing 385 bhp (287 kW) and 520 N·m (380 lb·ft).

An improved version of the ZF six-speed automatic/sequential gearbox is now fitted which includes taller gearing to take advantage of the new engines' greater torque output and an updated lock-up system to further reduce fuel consumption. Other technical changes include the fitting of the more powerful brakes from the Range Rover Sport and thicker anti-roll bars to improve on-road handling. The electronic handling system have been updated - the Stability Control System now includes a programme that detects the onset of understeer and applies the brakes. The D4 retains its predecessor's fully independent air suspension with cross-linking when off-road and the twin-range transfer gearbox with an electronic infinitely-variable locking centre differential. As before a similar locking rear differential is available. The Terrain Response system remains but with two new features- the 'Sand' mode incorporates a new traction control mode to prevent loss of traction when starting off and stopping in soft sand, and the 'Rock Crawl' mode gains a feature that applies gentle brake pressure at low (less than walking pace) speeds to improve grip and stability on slick rock. The system is also 'retuned' to account for the new engines and gearboxes with their different torque characteristics. Other new electronic systems include Trailer Stability Assist which can adjust the throttle and brakes to prevent a dangerously swaying trailer.

The Discovery 4 also features a redesigned interior (again in keeping with the new styles introduced elsewhere in the LR range for 2010). The instrument cluster is updated with the speedometer and tachometer analogue gauges being redesigned to improve clarity. The analogue temperature and fuel gauges of the previous model, and the electronic information display are replaced by a single TFT screen capable of displaying information in a variety of modes and formats. The interior also has a new centre console, which includes redesigned and simplified switches and controls. The Discover also has a new seat design and a wider range of available interior materials-some (such as the highly polished 'Piano Black' and wood veneer) are materials previously only seen in Range Rover models. The stated aim of the interior redesign was to lift the vehicle upmarket, especially the higher-spec models which are now aimed at the luxury and executive markets.

The car gains some electronic systems from the Range Rover lineup such as the optional 'Surround Camera System'- a series of cameras located in the headlamps, wing mirrors and rear tailgate handle which can display their images on the centre console screen to improve visibility when off-road, when hitching up to a trailer or when parking. Other electronic systems are intended to improve efficiency- for example the engines feature a 'Smart' alternator that only charges the battery when engine load is low, thus helping to reduce fuel consumption when the engine is working harder.

The Discovery 4 was unveiled in the summer of 2009 and went on sale in the United Kingdom on 1 September that year. A Commercial van variant was released in the UK at the same time using the 2.7 engine and offered in GS and XS trim levels. In the Republic of Ireland a Commercial van was offered from 1 January 2010 based on the XE 2.7 manual and HSE 3.0 auto engines.

For the 2012 model year, diesel models in Europe came with the new eight-speed auto gearbox with steering wheel paddle controls and a circular dial selector that raises upon startup. The SDV6 engine was uprated to 255 bhp whilst both diesel engines featured reduced emissions for European models. During 2012 the HSE Luxury special edition was announced, featuring enhanced trim levels, and available in Europe and North American markets.

In Ireland, 2012 saw the introduction of a new five-seat version of the Discovery 4 classified as an N1 Commercial vehicle, therefore attracting lower VRT rates. There is also a new two-seat Commercial on the same rules. All Irish models came with the lower emissions TDV6 engine. 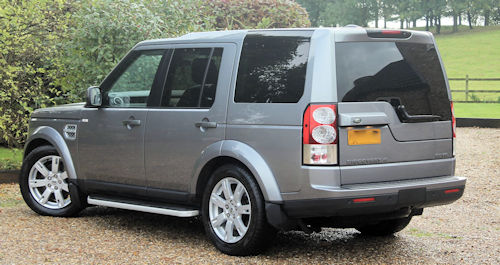 In a January 2011 comparison test by Car and Driver, the Land Rover LR4 came in fourth place out of five cars behind the Audi Q7, BMW X5, and Acura MDX. However, it has always won the Auto Express categories of Best Large SUV and Best Towcar since it was launched in 2009.

Land Rover Discovery 4 Metropolitan Police Service Used to transport Raoul Silva whilst disguised as a police officer, to proceed to the inquiry. It is then driven by Raoul Silva as an escape vehicle after the attack on the inquiry.