The Series II Discovery debuted in autumn 1998 and in the US in 1999. Land Rover promoted that the Discovery Series II had been modified with 720 'differences'. The interior and exterior was re-worked to be less utilitarian, but it was still similar to the Series I. Every body panel was new except the rear door outer skin. The rear body was extended to improve load space but at the expense of added rear overhang, which adversely impacted off-road ability. Changes to the diesel engined models saw the 2,495 cc Td5 (in-line direct-injected straight-five engine introduced, in line with the updated Defender models. This electronically managed engine was smoother, producing more usable torque at lower revs than its 300 Tdi predecessor. The Td5 engine is often mistakenly attributed to BMW but the engine was derived from the Rover L-series passenger car engine and developed by Land Rover. The 3,948 cc V8 petrol version from the Disco 1 was replaced with the Range Rover P38 Thor 4.0-litre Rover-derived V8. There was no actual increase in capacity over the previous 3.9-litre engine. Although the basic design of the engine was similar it was actually quite different internally. It used a different crankshaft, had larger bearing journals with cross bolted caps and different con rods and pistons. The blocks were machined differently to accept extra sensors for the Gems and Bosch (thor) injection system and to allow the extra stroke of the 4.6 crankshaft. For the 2003 and 2004 model year Discovery II they changed to the 4.6-litre V8 (though the 4.0 continued as the only V8 option offered in the UK). ACE (Active Cornering Enhancement, an electronically controlled hydraulic anti-roll bar system) was fitted to some versions, which reduced cornering roll. Self-levelling air springs were fitted to some models and European type-approval for seven-seat vehicles was only given for air-sprung cars.

The locking centre differential was still fitted until early 2001, although the linkage to operate it was not attached, as Land Rover believed that the traction control and newly-developed Hill Descent Control would render it redundant. The actual locking mechanism was removed in early 2001, before being fully reinstated (with linkage) with the face-lifted 2004 model. Whilst the traction control system worked very effectively, it did not offer the same level of control and smooth operation as the vehicles fitted with the diff lock. Customer demand saw the diff lock controls fully reinstated as a cost option only (standard on top of range HSE/SE vehicles) on UK/Irish models, and aftermarket kits are offered by several vendors for those vehicles which were produced with the lock, but not the linkage. 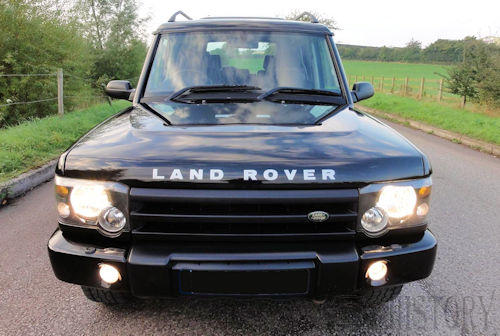 The "face-lift" models are easily identified by new "pocketed" headlamps which matched the Range Rover and face-lifted Freelander models as well as redesigned turn and brake lamps on the rear of the vehicle; the turn signals were moved from the bumper to the high side fixtures. The earlier Series II models could in turn be easily distinguished from the original Discovery by the position of those stop light fixtures above the window-line (earlier models had them below), and by the replacement of paddle door handles with the current sort. The Series II also differs in dimensions, but this can be difficult to discern unless one of each are sitting next to one another in a car park.

A small number of Discovery II Commercial models were produced by Land Rover Special Vehicles, this time based on the five-door bodyshell but with the windows rendered opaque to give van-like appearance and security. Normal vehicles were exported to Republic of Ireland, where the rear side windows were smashed and rear seats were destroyed in the presence of a Revenue official, to offer a model that avoided the Vehicle Registration Tax (saving approximately 40%).

In the final production run of the Discovery II, only two models were offered for sale in the UK market, the 'base' Pursuit, which still retained a high level of equipment as standard, and the top specification Landmark, which offered all Leather interior, twin sunroofs, Active Cornering Enhancement six-disc CD player and Heated Windscreen. The final vehicles left the production lines in late May 2004 to make way for the all new Discovery 3 (LR3) models

The Commercials released by Special Vehicles came with rear self levelling suspension as standard, and on the facelifted vehicles the rendered windows are fixed in place so while a retrofit of seats is viable, it does not offer any significant comforts to the rear passengers unless the doors are almost completely rebuilt to facilitate windows that actually open – this also would require additional wiring. The last revision of this vehicle still had a high spec and came with climate control, roof bars, alloy wheels and marine ply boarding with full-length rubber mat in the loadspace as standard. 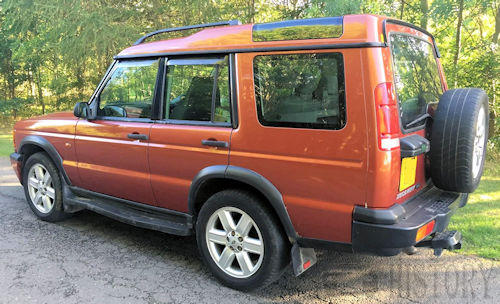