The Land Rover was conceived by the Rover Company in 1947 during the aftermath of World War II. Before the war Rover had produced luxury cars which were not in demand in the immediate post-war period and raw materials were strictly rationed to those companies building construction or industrial equipment, or products that could be widely exported to earn crucial foreign exchange for the country. Also, Rover's original factory in Coventry had been bombed during the war, forcing the company to move into a huge "shadow factory" it had built during the war in Solihull near Birmingham to construct aircraft. This factory was now empty but starting car production there from scratch would not be financially viable. Plans for a small, economical car known as the M Type were drawn up, and a few prototypes made, but would be too expensive to produce.

Maurice Wilks, Rover's chief designer came up with a plan to produce a light agricultural and utility vehicle, of a similar concept to the Willys Jeep used in the war, but with an emphasis on agricultural use. He was possibly inspired by the Standard Motor Company, who faced similar problems and were producing the highly successful Ferguson TE20 tractor in their shadow factory in Coventry. More likely, he used his own experience of using an army-surplus Jeep on his farm in Anglesey, North Wales. His design added a power take-off (PTO) feature since there was a gap in the market between jeeps and tractors (which offered the feature but were less flexible as transport). The original Land Rover concept (a cross between a light truck and a tractor) is similar to the Unimog, which was developed in Germany during this period.

The first prototype had a distinctive feature—the steering wheel was mounted in the middle of the vehicle. It hence became known as the "centre steer". It was built on a Jeep chassis and used the engine and gearbox out of a Rover P3 saloon car. The bodywork was handmade out of an aluminium/magnesium alloy called Birmabright, to save on steel, which was closely rationed. Paint was also in short supply, resulting in the first production vehicles making use of army surplus green paint. The first pre production Land Rover's were being developed in late 1947 by a team led by engineer Arthur Goddard.

Tests showed this prototype vehicle to be a capable and versatile machine. The PTO drives from the front of the engine and from the gearbox to the centre and rear of the vehicle allowed it to drive farm machinery, exactly as a tractor would. It was also tested ploughing and performing other agricultural tasks. However, as the vehicle was readied for production, this emphasis on tractor-like usage decreased and the centre steering proved impractical in use. The steering wheel was mounted off to the side as normal, the bodywork was simplified to reduce production time and costs and a larger engine was fitted, together with a specially designed transfer gearbox to replace the Jeep unit. The result was a vehicle that didn't use a single Jeep component and was slightly shorter than its American inspiration, but wider, heavier, faster and still retained the PTO drives.

The Land Rover was designed to only be in production for two or three years to gain some cash flow and export orders for the Rover Company so it could restart up-market car production. Once car production restarted, however, it was greatly outsold by the off-road Land Rover, which developed into its own brand that remains successful today. Many of the defining and successful features of the Land Rover design were in fact the result of Rover's drive to simplify the tooling required for the vehicle and to use the minimum amount of rationed materials. As well as the aluminium alloy bodywork (which has been retained throughout production despite it now being more expensive than a conventional steel body due to its ideal properties of light weight and corrosion resistance) other examples include the distinctive flat body panels with only simple, constant-radius curves (originally used because they could be cut and formed by hand from aluminium sheet on a basic jig) and the sturdy box-section ladder chassis, which on Series vehicles was made up from four strips of steel welded at each side to form a box, thus cutting down on the complex welding operations required when making a more conventional U- or I-section frame.

Land Rover entered production in 1948 with what was later termed the Series I. This was launched at the Amsterdam Motor Show. It was originally designed for farm and light industrial use, and had a steel box-section chassis, and an aluminum body.

Originally the Land Rover was a single model offering, which from 1948 until 1951 used an 80-inch (2,000 mm) wheelbase and a 1.6-litre petrol engine producing around 50 bhp (37 kW; 51 PS). The four-speed gearbox from the Rover P3 was used, with a new two-speed transfer box. This incorporated an unusual four-wheel-drive system, with a freewheel unit (as used on several Rover cars of the time). This disengaged the front axle from the manual transmission on the overrun, allowing a form of permanent 4WD. A ring-pull mechanism in the driver's footwell allowed the freewheel to be locked to provide more traditional 4WD. This was a basic vehicle: tops for the doors and a roof (canvas or metal) were optional extras. In 1950, the lights moved from a position behind the grille to protruding through the grille.

From the beginning it was realised that some buyers would want a Land Rover's abilities without the spartan interiors. In 1949, Land Rover launched a second body option called the "Station Wagon", fitted with a body built by Tickford, a coachbuilder known for their work with Rolls-Royce and Lagonda. The bodywork was wooden-framed and had seating for seven people. Tickford was well equipped in comparison with the standard Land Rover, having leather seats, a heater, a one-piece laminated windscreen, a tin-plate spare wheel cover, some interior trim and other options. The wooden construction made them expensive to build. The Tickford was taxed as a private car, which attracted high levels of Purchase Tax unlike the original Land Rover. As a result, fewer than 700 Tickfords were sold, and all but 50 were exported.

In 1952 and 1953, the petrol engine was replaced with a larger 2.0-litre inline-four engine. This engine was "Siamese bore", meaning that there were no water passages between the pistons. During 1950, the unusual semi-permanent 4WD system was replaced with a more conventional setup, with drive to the front axle being taken through a simple dog clutch. Around this time the Land Rover's legal status was also clarified. As mentioned above, the Land Rover was originally classed as a commercial vehicle, meaning it was free from purchase tax. However, this also meant it was limited to a speed of 30 mph (48 km/h) on British roads. After an appeal to the Law Lords after an owner was charged with exceeding this limit, the Land Rover was classified as a "multi-purpose vehicle" which was only to be classed as a commercial vehicle if used for commercial purposes. 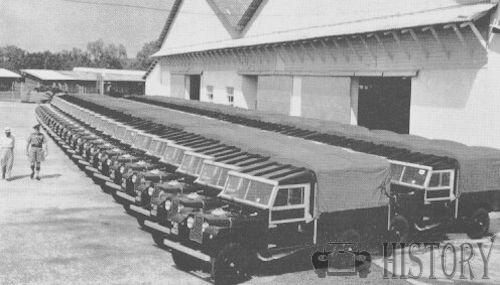 1956 saw the introduction of the first five-door model, on the 107-inch chassis known as the "Station Wagon" with seating for up to ten people. The 86-inch model was a three-door, seven-seater. The new station wagons were very different from the previous Tickford model, being built with simple metal panels and bolt-together construction instead of the complex wooden structure of the older Station Wagon. They were intended to be used both as commercial vehicles as people-carriers for transporting workmen to remote locations, as well as by private users. Like the Tickford version, they came with basic interior trim and equipment such as roof vents and interior lights.

The Station Wagons saw the first expansion of the Land Rover range. Station Wagons were fitted with a "Safari Roof" which consisted of a second roof skin fitted on top of the vehicle. This kept the interior cool in hot weather and reduced condensation in cold weather. Vents fitted in the roof allowed added ventilation to the interior. While they were based on the same chassis and drivetrains as the standard vehicles, Station Wagons carried different chassis numbers, special badging, and were advertised in separate brochures. Unlike the original Station Wagon, the new in-house versions were highly popular. 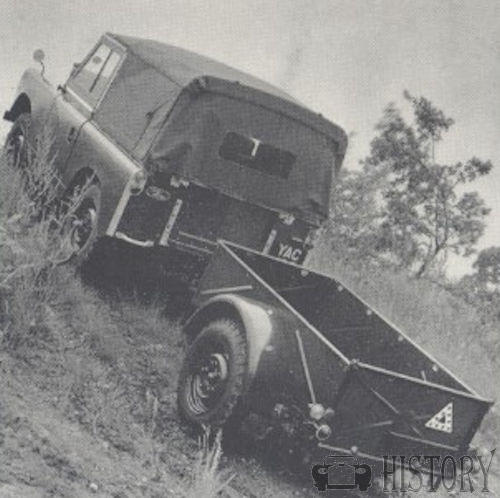 Wheelbases were extended by 2 inches (51 mm) to 88 inches (2,200 mm) and 109 inches (2,800 mm) to accommodate the new diesel engine, to be an option the following year. This change was made to all models with the exception of the 107 Station Wagon, which would never be fitted with a diesel engine, and would eventually be the last series I in production. The diesel engine was slightly longer than the original chassis allowed so the extra two inches were added in front of the bulkhead to accommodate the new engine. These dimensions were to be used on all Land Rovers for the next 25 years.

Finally, in 1957, the "spread bore" petrol engine was introduced, followed shortly by a brand new 2.0-litre diesel engine that, despite the similar capacity, was not related to the petrol engines used. The petrol engines of the time used the rather out-dated inlet-over-exhaust valve arrangement; the diesel used the more modern overhead layout. This diesel engine was one of the first high-speed diesels developed for road use, producing 52 hp (39 kW) at 4,000 rpm.