The Series III had the same body and engine options as the preceding IIa, including station wagons and the 1 Ton versions. Little changed cosmetically from the IIA to the Series III. The Series III is the most common Series vehicle, with 440,000 of the type built from 1971 to 1985. The headlights were moved to the wings on late production IIA models from 1968/9 onward (ostensibly to comply with Australian, American and Dutch lighting regulations) and remained in this position for the Series III. The traditional metal grille, featured on the Series I, II and IIA, was replaced with a plastic one for the Series III model. The 2.25-litre engine had its compression raised from 7:1 to 8:1, increasing the power slightly (the high compression engine had been an optional fit on the IIa model for several years). During the Series III production run from 1971 until 1985, the 1,000,000th Land Rover rolled off the production line in 1976. The Series III saw many changes in the later part of its life as Land Rover updated the design to meet increased competition. This was the first model to feature synchromesh on all four gears, although some late H-suffix SIIA models (mainly the more expensive Station Wagons) had used the all-synchro box. In keeping with early 1970s trends in automotive interior design, both in safety and use of more advanced materials, the simple metal dashboard of earlier models was redesigned to accept a new moulded plastic dash. The instrument cluster, which was previously centrally located, was moved to the driver's side. Long-wheelbase Series III vehicles had the Salisbury rear axle  as standard, although some late SIIA 109-inch (2,800 mm) vehicles had them too. 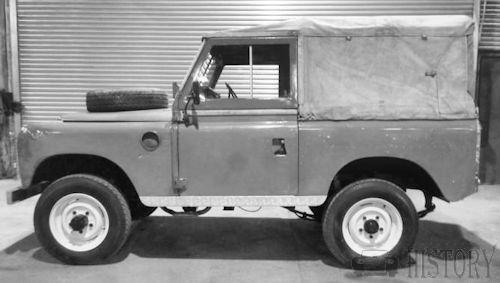 In 1980, the four-cylinder 2.25-litre engines (both petrol and diesel) were updated with five-bearing crankshafts to increase strength in heavy duty work. At the same time the transmission, axles and wheel hubs were re-designed for increased strength. This was the culmination of a series of updates to the transmission that had been made since the 1960s to combat the all-too-common problem of the rear axle half-shafts breaking in heavy usage. This problem was partly due to the design of the shafts themselves. Due to the fully floating design of the rear wheel hubs, the half shafts can be removed very quickly without even having to jack the vehicle off the ground. The tendency for commercial operators to overload their vehicles exacerbated this flaw which blighted the Series Land Rovers in many of their export markets and established a reputation that continues in many markets to the present day. This is despite the 1982 re-design (mainly the increase of driving-splines from 10 to 24 to reduce stress) that all but solved the problem.

Also, new trim options were introduced to make the interior more comfortable if the buyer so wished (many farmers and commercial users preferred the original, non-trimmed interior).

These changes culminated in April 1982 with the introduction of the "County" spec. Station Wagon Land Rovers, available in both 88-inch (2,200 mm) and 109-inch (2,800 mm) types. These had all-new cloth seats from the Leyland T-45 Lorry, soundproofing kits, tinted glass and other "soft" options designed to appeal to the leisure owner/user.

Of more interest was the introduction of the High Capacity Pick Up to the 109-inch (2,800 mm) chassis. This was a pick-up truck load bay that offered 25% more cubic capacity than the standard pick-up style. The HCPU came with heavy-duty suspension and was popular with public utility companies and building contractors. 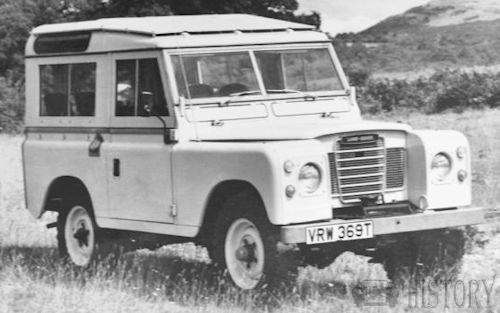 From 1979 until 1985 the Stage 1 was built using some of the same components as the Range Rover and 101 Forward Control, such as the LT95 gearbox and 3.5-litre Rover V8 petrol engine. The engine was detuned to 91 hp (68 kW) from the 135BHP of the contemporary Range Rover.

"Stage 1" refers to the first stage of investment by the British Government in the company to improve the Land Rover and Range Rover product offerings, which eventually led to the Land Rover 90 and 110. The use of the Range Rover engine and drive train made it the only Series III vehicle to have permanent four-wheel drive.

The 1 Ton 109 inch - produced from 1968 to 1977, covering late IIA and series III Models. It was basically a Series IIB Forward Control built with a standard 109 in body, featuring 2.6-litre petrol engine, lower ratio gearbox, ENV front and rear axles, (Salisbury front and rear on later Series IIIs) though some late IIAs were fitted with ENV axles in front and Salisbury on the rear. Later series IIIs had a Rover type front axle with uprated differential. The chassis frame was unique to the model and featured drop-shackle suspension similar to the military series Land Rovers. 900x16 tyres were a standard feature and these machines were commonly used by utility companies and breakdown/recovery firms. Only 170 IIA and 238 Series IIIs (1 Ton) were built for the home market. Export markets had even fewer examples, making this one of the rarest types of Land-Rover ever built.

The Series III continued this success in the early 1970s, but from the middle of the decade sales declined. A large coal export deal to Japan relied on the subsequent import of Japanese cars and other goods, a combination of this increasing competition and increasingly poor quality of the components being shipped from Britain meant that Land Rover's dominance slipped. A problem specific to Australia was the always-limited supply of new Land Rovers. Leyland's factory never had the capacity to meet possible demand and the need to import almost the entire vehicle in kit form from Britain restricted the supply and manufacturing process further. This led to a long waiting list developing for the Leyland product whilst commercial operators could receive large fleets of Japanese vehicles very quickly. The other problems faced by Land Rover were the same throughout its export markets- compared to the Japanese competition, the Land Rover was underpowered, unreliable and slow with a poor ride quality, despite their superior off-road ability. Poor rust-proofing and low-quality steel used in comparison to the Japanese vehicles turned the buyers away in large numbers and by 1983, with the introduction of the One Ten, the Toyota Land Cruiser became the best-selling 4×4 in Australia.

In the early 1980s, Land Rover Australia had made some changes to the vehicle to try to combat this sales decline. As well as the fitting of the V8 petrol engine in the 1979 "Stage One", as in the rest of the world, Australia also received the same vehicle with the option of a 3.9-litre 89 hp (66 kW) four-cylinder Isuzu diesel engine. This helped slow the sales decline, but the rest of the vehicle's shortcomings let it down. The One Ten was also available with this engine, and a turbocharged version producing in excess of 100 horsepower (75 kW) powered the military 6×6.

By the late 1970s, the British Army had acquired around 9,000 Series III models, which were mainly a special 'Heavy Duty' version of the 109-inch (2,800 mm) Soft Top. These models had improved suspension components and a different chassis cross-member design. These were produced in 12-volt 'GS' models and 24-volt 'FFR' versions. A small number were 88-inch (2,200 mm) GS and FFR models, but in general the Army used the Air-Portable 1/2 ton, 88-inch (2,200 mm) "Lightweight" version. The Lightweight was in service by many armies all over the world. In Europe even the Dutch Landmacht and the Danish Army used the Land-Rover Lightweight. Instead of the petrol engine the Dutch and Danish Lightweights had diesel engines. Instead of the canvas top the Dutch ones had PVC tops like the modern Land Rover 'Wolf'. 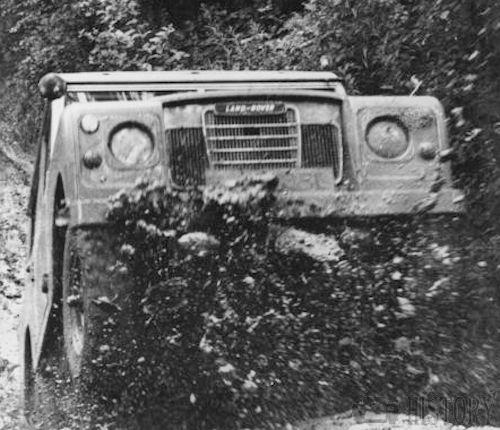