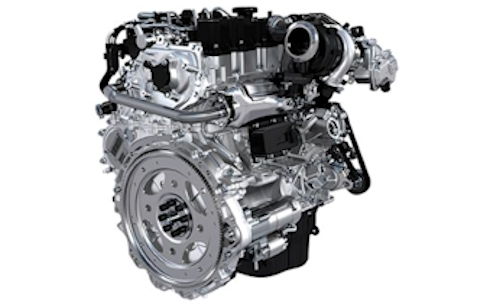 Ingenium refers to a British-Indian car manufacturer Jaguar Land Rover (JLR) developed four-cylinder engine series , which has been manufactured since early 2015 and was initially installed in the Jaguar XE .

Jaguar Land Rover has been manufacturing the engine family , which was developed in accordance with the downsizing principle , since early 2015 in the newly built plant near Wolverhampton . The engine block is made of aluminum . It is compact and extremely rigid, offers good heat dissipation and high wear resistance. Initially available in diesel only, the Ingenium engines include turbocharger with variable turbine vane (VTG) , high-pressure direct injection , variable valve timing, a stop-start system , a split cooling circuit and two overhead camshafts(DOHC). The architecture can be used for different displacementand transmission variants as well as for different drive systems (rear, all-wheel and hybrid drive). In addition, the motors are designed for both transverse and longitudinal installation, so as to be able to cover a wide range of models. So far there is from the presented in September 2014 motor two power levels of 120 and 132 kW (163 and 180 hp). Currently, the engines are used in the Jaguar XE , the Jaguar XF , the Jaguar F-Pace , the Land Rover Discovery Sport and the Range Rover Evoque .

A special feature is the modular architecture, which allows cross-model configurations and components. For the Ingenium engines, the bore and stroke dimensions are the same as the cylinder spacing and cylinder volume of 500 cc. The modular architecture also improves the configurability and flexibility to respond quickly to future legislation, new competition criteria, or fluctuations in global demand.

The various engine variants have exhaust gas turbochargers, which increase the power output, especially in the lower rpm range with low consumption and low CO 2emissions. In the first two expansion stages with 120 kW (163 hp) and 132 kW (180 hp), the developers opted for a turbocharger with adjustable turbine vanes (VTG turbocharger).

The design aims with low internal friction to the most efficient fuel use. To do this, the engineers moved the crankshaft out of the central axis of the cylinder block and used friction-less roller bearings for the camshafts instead of plain bearings .The use of a variably controlled oil pump , as a function of engine speed , engine load and temperatures required in each case, the amount of lubricant promotes, as well as a variable operating water pump reduce internal friction.

A camshaft adjustment (variable cam timing) from the supplier BorgWarner ensures low reaction times and thus also contributes to increasing the efficiency of the engine. Another focus of the development was the optimization of the NVH behavior (noise, vibration, harshness). In order to achieve the lowest possible vibration level, the manufacturer uses a stiffened cylinder block and two balance shafts . The balance shafts are roller bearings. Further measures such as an acoustic cover of the oil sump, decoupled injection nozzles and a slightly oval injection pump wheel (0.5 mm) also improve smoothness.

Engine Specifications in the Jaguar XE