The Lancia Flavia Sport was a sports car built by Zagato in Italy from 1962 to 1967.

Zagato made the version for the Lancia Sport unconventional, but aerodynamic and completely in aluminum, presented as a prototype at the 1962 Geneva Motor Show and in a definitive version at the Turin Motor Show of the same year. And so from June 1962 to May 1967, a second coupe variant was offered, the Lancia Flavia Sport.  It is now colloquially as known. as the Flavia Zagato a light weight two-door "sport" version coupé the 2 front seats,with adjustable backrests.

The Flavia Sport was designed and manufactured by Zagato and was developed especially for racing use  to which 4 competition specimens lightened and enhanced up to 130 HP and fitted roll-bars and race-specific tires for the HF Lancia Racing Team.

The sides, dominated by large glass surfaces, ended with cantilevered windows in the rear part of the roof. In addition to the boot lid, the sport has a rear window, which can be opened separately from the inside by pressing a button several centimeters. The outer skin of the body is made entirely of aluminum.in total only 727 of the Zagato-bodied models were built. 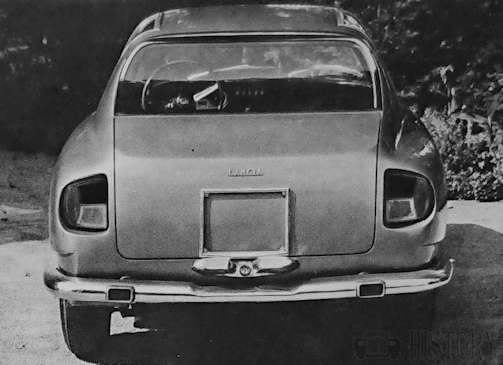