The Lancia Gamma was produced by the Turin car manufacturer Lancia , The sedan and the coupe were presented in March 1976 at the 46th Geneva Motor Show . While the sedan was shortly after the presentation to the dealers, the coupe was delivered from March 1977.which was offered between March 1976 and August 1984.

The Gamma was Lancia's last series, which used almost no components of the Italian mass-produced manufacturer Fiat . The technically idiosyncratic models were not widely used, because they acquired the reputation of great unreliability early on. The Lancia Gamma Coupe is today a sought-after .

The gamma had front-wheel drive like the Flavia and 2000, but unlike the Flaminia. This interpretation was rare in the 1970s in the automotive upper class.While the design of the sedan is predominantly critically acclaimed, the stylistically independent Gamma Coupé is considered one of the most beautiful vehicles of the 1970s. Again, a Pininfarina creation, it was the work of Aldo Brovarone , as his best design applies. As a top model of the company's Gamma coupe was in the tradition of the Fiat 130 Coupe , whose production was discontinued in the late 1977 The general layout of the coupe also showed similarities to the Ferrari 365 GT4 2 + 2 from the time.

Brovarone designed a classic notch construction that followed strictly the trapezoidal line Pininfarina had developed two decades earlier. a. established with the Lancia Flaminia Coupe. A special feature was a wide side bead on the vehicle flanks , in which a dark accent strip made of plastic was embedded. Some details were different than their indirect predecessor, the Fiat 130 Coupé , playful. This included a multi-angled upper edge of the boot lid and a small paragraph at the point where the C-pillar merged into the vehicle roof. The latter feature was also found in the simultaneously presented Maserati Kyalami , which had been designed by Pietro Frua .

A special feature in the interior were the backrests of the front seats: they could - supposedly for safety reasons - only fold forward when the driver or front passenger door was fully open. The drive technology took over the Gamma Coupé unchanged from the sedan. The only difference was the 115 mm shortened base group. Both engine versions were available in the Gamma Coupe.The coupe also made the conversion of the 2.5-liter version of carburetors on an injection system in the course of the revision in the spring of 1980.

The gamma received a boxer engine with four cylinders. The design was based in its basic features on the engine of the Flavia, but was largely redesigned or at least greatly revised. Other than the piston engine of the Flavia, with two underlying camshaft , the engine of the gamma had two overhead camshafts with toothed belt drive . Engine block with wet liners and cylinder heads were made of aluminum. The strengths of this design, were its compactness, low weight of 135 kg for the 2.5 liter engine , low center of gravity and the front-wheel drive , which resulted very good driving characteristics.

The engine was technically immature and had some serious design flaws. So the seats of the wet cylinder liners were too soft, so the liners seeped into the block, which in turn eased the tension on the cylinder head gasket, mixing oil and cooling water, water loss and overheating the engines. The camshafts had no static lubricating oil supply, so they ran dry after starting to the onset of an oil supply in the cylinder head at their friction surfaces to the rocker arms, which was a very high wear at these points occurred. The oil pump of the power steering was driven by a V-belt of one of the camshafts. This resulted in only a few engines making a mileage of 100,000 kilometers or more.

With the facelift in the spring of 1980, the 2.5-liter version of the Boxer engine instead of the previously used Weber carburetor received a fuel injection of the LE-Jetronic type from Bosch . The engine power did not increase as a result; however, the driveability of the engine improved and gas mileage dropped. In addition, the engines were much more reliable, which was also attributable to the better materials in the camshaft.

The drive technology of the Gamma sedan was used unchanged for the introduced in March 1977 Gamma Coupé, which was presented in parallel to the sedan.

Between 1978 and 1983, based on the Lancia Gamma several styling studies. Most of them were based on the coupe design.

The first concept car based on the Lancia Gamma was the Megagamma, introduced in 1978, a five-door minivan by Giorgetto Giugiaro ( Italdesign ). The car was based on the bottom group of the Gamma Berlina, but was 20 cm shorter and 30 cm higher than the production model. The car was geared to the space requirements of a family of five. Giugiaro paid special attention to practical details. This included a high seating position and a sliding rear seat. With the Megagamma Giugiaro took up the idea of what later became known as a minivan .Mass production of the Megagamma did not materialize; his concept was copied a few years later by Japanese, European and American vehicles. Thus this is forerunner of the Nissan Prairie , Chrysler Voyager or Renault Espace .  The Megagamma is considered to be arguably the most significant design of the 1970s. Giugiaro transferred the concept later on small cars. His Fiat Uno took on numerous design features that were first realized in the Megagamma. 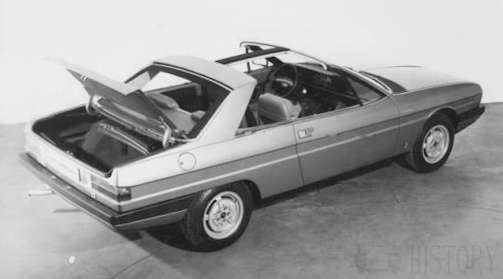 Introduced in 1978, the Lancia Spider 2500 was a modification of the Lancia Gamma Coupé developed by Pininfarina. It was - unlike the name suggests - not a full convertible, but a coupe with removable roof parts over the driver and the passenger. The rear roof panel was connected to the windshield by a wide central web. In the literature, the vehicle is sometimes referred to as a "Spider T-Roof". The windows of the side doors were frameless and the B-pillar has been removed above the belt line. The Spider remained a unique piece.

In 1980, Pininfarina presented the Gamma Scala , a four-door version of the Gamma Coupe. The vehicle had a conventional notchback and wore the same attractive lines as Aldo Brovarone's coupe. The Scala was in the tradition of the Fiat 130 Opera, which in turn had been a four-door version of the Fiat 130 Coupe. Like the Opera, the Scala remained a one-of-a-kind piece. The vehicle still exists. It has been in the UK since about 2005.

In 1982, Pininfarina introduced another derivative of the Gamma Coupé: the Gamma Olgiata , which represented a three-door sports suit in the style of a Shooting Brake . Again, there was no mass production.