The Lancia Y is a small car of the Italian brand Lancia . It was built from autumn 1995 to late summer 2003 and had a low 2 star euro Ncap crash rating.

The vehicle stood out above all by its novel shape design, which comes from the Italian designer Enrico Fumia. Because of his extravagant and polarizing appearance, he was particularly popular with Italian customers, while he freaks a niche in the rest of Europe. The Y was offered in a, for this vehicle class, unusual variety of colors and features. It was available with seat covers made of microfiber Alcantara in different colors. Apart from 13 standard colors, the customer was able to choose among 100 other shades from the so-called Kaleidos program.

After the facelift in October 2000 Lancia used instead of Alcantara a so-called "Castiglio"  for the covers. At times, leather covers were also available ex works, which could also be retrofitted. Another feature is the arrangement of the instruments in the middle of the dashboard. The comfort equipment always included a central locking and electric windows. An air conditioner with pollen filter was available at extra cost or as standard as well as electrically adjustable and heated mirrors with outside temperature gauge, alloy wheels and sunroof.

The Y in the LX version (from 2000) had a Blaupunkt radio with integrated satellite navigation system as standard. Technically, the little Lancia is closely related to the former Fiat Punto of the first generation and has some common parts. However, unlike the Punto, the Y was always three-door.

The base model of the Y was marketed under the name LE, ranked above the LS and above this the LX equipment. Originally planned as a time-limited special edition equipment variant Elefantino Blu soon became a fixed base version and eventually replaced the LE. For the discerning customer, Lancia offered the Y Elefantino Rosso, which features a sports suspension, titanium- alloyed light-alloy wheels, and a shorter-throw gearbox with the most powerful engine. were also the models Y DoDo and Y Vanity and a Limited to 300 Limited Luxury version of the LX available. 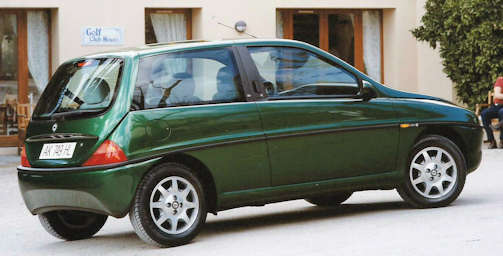