The Lancia Ardea is an automobile manufacturer Lancia and was produced from autumn 1939 to early 1953.

In addition to the sedan and the convertible , the vehicle was also available in a long version as a taxi and in the commercial vehicle "Furgoncini" (station wagon) and "Camioncini" (pick-up) variants .

In the autumn of 1948 there was a coupe of Zagato on Ardea basis with the Panoramica.Pininfarina also made some cabriolets . The name Ardea goes back to the same place . In the spring of 1953, the successor model Lancia Appia was presented.

Italy had switched from left to right between 1924 and 1926, but Lancia produced the model Ardea as right-hand drive for Italy. Overall, there were the Ardea in four series, from the second series there was a 12-volt electrical system, from the third a 5-speed gearbox and from the fourth a new engine block made of aluminum.

The Lancia Ardea (or type 250) is  a small car,  this new model is naturally of the "load-bearing" type. The Ardea has a narrow V-cylinder 4-cylinder engine (type 100) (the angle of the "V" should be 19 ° 54 ′ even if some sources report 17 ° 40 ′) of 903 cm³ (bore 65 mm and stroke 68 mm) which delivers a maximum power of 28.8 hp.  with the engine block made of thin-walled cast iron to avoid the use of alloys aluminum, deemed more expensive and still not sufficiently reliable. Refined detail of this engine are the duralumin connecting rods. The Ardea tests are carried out by the expert Luigi Gismondi, who initially uses some Aprilia equipped with an Ardea engine, and who does not encounter serious inconveniences, without prejudice to the poor reliability of the front shock absorbers, which, moreover, can finally be remedied by suitably modifying the front end.

As for the suspension Lancia setting at the front (independent wheels with vertical telescopes incorporating helical springs and concentric hydraulic shock absorbers), we find a rear  classic rigid bridge with longitudinal leaf springs .An interesting feature is given by the transmission shaft with articulated and elastic joints with cylindrical joints (at the inside of rubber bushes). The rest of the transmission consists of the usual dry single-plate clutch and a four-speed forward gearbox, with quick-fit gears.

Despite the smaller dimensions, the Ardea interior - whose access is also excellent here due to the opening system of the closet doors and the absence of the central upright - does not sacrifice passengers: the very advanced position of the engine - mounted almost cantilevered with respect to the front axle - allows a good overall habitability, while the occupants of the rear seats end up having more space in height thanks to the tail line (or more precisely of the part roof end) more squat and less elusive than that of Aprilia. Staying on the bodywork, two other details significantly differentiate the two cars: theengine hood (which in Ardea is made in one piece and of the most modern type with "crocodile" opening) and the trunk (which is not accessible from the outside but from the passenger compartment). The spare wheel is accessible from the outside, by removing a special door bearing the plate. Top speed above 105 km per hour and consumption of less than 8 liters per 100 km 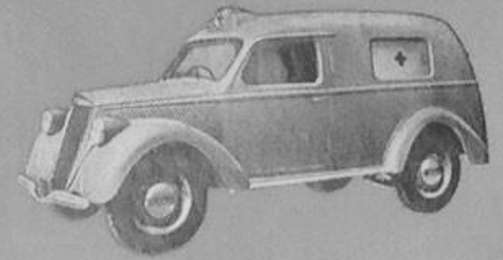 The Ardea was produced in four series:

The Ardea sedan was presented in preview to Benito Mussolini, head of the Italian government, in November 1939, but its series production began a month later, in December. The first deliveries to customers date back to January 1940.
Despite the small size of the engine, also in the case of the Ardea, the Lancia plans to prepare a special platform chassis (type 350) to be destined for body builders for out-of-series versions.

Due to the war events (but also due to the class of the car not suitable for the purpose), very few units will be built of this chassis.
At the end of 1940, the sedan was joined by the "Tassì" version, also known as the 450-Rome type: set aside the load-bearing body, this was made on a platform chassis with increased wheelbase and track. In the three-year period 1940-1942, 501 copies of the Tassi Roma 450 will be made.

2nd series: summer 1945 to autumn 1948
Although Italy is now directly involved in the Second World War, on 10 October 1941, after 2992 sedans built, the Lancia made a change to the luggage compartment in the Ardea, which became accessible from the outside via a large lid, similar to the one existing on Aprilia. This modified Ardea is defined as "second series" (although, for the sake of completeness, it must be said that some believe that the beginning of the second series coincides with the release of the 12-volt version, in January 1948).
Between the end of '42 and the beginning of '43, the entire Lancia production activity was transferred to the factories in Bolzano, considered less vulnerable, and the construction of Ardea, already reduced to half a thousand pieces in 1942, contracted further until practically stopped in 1944, to then resume with some regularity in February 1946.

In the meantime, from the second half of 1945, the commercial version of the “van” type was added to the sedan, which would remain in production until 1953 and which will be flanked, from mid-1948, by the “pickup truck” version.

At the end of January 1948, Ardea underwent some noteworthy changes (which, however, as already mentioned, do not officially give rise to a new series), including the adoption of the 12-volt electrical system (instead of the 6-volt one previously installed) and some adjustments to the engine (change in compression ratio, different carburettor calibration)

The production of the third series (officially presented at the Turin Motor Show on September 15, 1948) begins on August 5, 1948 and presents the adoption of the 5-speed gearbox as the main novelty (yet another Lancia "record"), but it is aesthetically distinguished by the widening of the rear window and the disappearance of the central "ridge" rib on the roof and on the boot lid.

The fourth and final series begins on November 16, 1949 and differs from the previous series in terms of modifications to the engine (new cylinder head in aluminum instead of cast iron, increase in the compression ratio value, new carburettor, slight increase in power from 28.8 to 30 hp) and for some bodywork details, inside ( driving wheel , ashtray, knob) and outside (application of a rubber protection to the bumpers and a different spelling of the word "Lancia" on the wheel covers).

The production of the Ardea sedan stopped at the end of 1952 to make way for the Appia (his heir), while the van survived a few months (320 were still built in 1953). Based on progressive numbers, the total number of units produced would be 22,730 units; from other Lancia documents, however, this total would result in only 22,710 units: it is probable that the 20 fewer units correspond to 20 cars destroyed / demolished in the autumn of 1942