The Lancia Aprilia was an automobile manufacturer Lancia and was produced from 1937 to 1949 with a tota number of 27,636 vehicles. The car was offered as a four-door sedan and as a coupe of various external coachbuilders, 7,554 "Aprilias" were in total coupes. The Aprilia remained without a clear successor.

The Lancia Ardea , which had been introduced in 1939 and produced until 1953, was much smaller, the Lancia Aurelia introduced in 1950 was larger than the Aprilia. Only in 1960 appeared with the Lancia Flavia again a car of comparable size.The body of the car was tested in the wind tunnel of the Politecnico di Torino and optimized from the lessons learned. Presented was the model, which was the last vehicle that had been developed under the participation of Vicenzo Lancia, 1937. Initially, the sales were sluggish, since the innovations such as the rear independent suspension rather aroused reservations. Only when no problems had shown did the sales figures increase. Although Italy had converted from left to right traffic from 1924 to 1926, the vehicle was still manufactured as a right-hand drive.

The production continued during the Second World War, but declined in the years 1943 to 1945 with only a few copies. 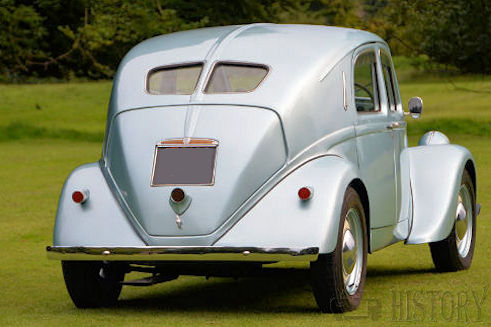