The Appia was more expensive than the Fiat 1100 and not as fast as the Alfa Romeo Giulietta . Like the Fiat 1100 before the war he has no B-pillar  , so that a large space opens with opposing doors. The four-cylinder V engine with closely spaced cylinders (bank angle 10.14 °) has two lower -lying camshafts , hemispherical combustion chambers and a dual-bearing crankshaft. The front wheels are suspended individually on a straight guide with sliding sleeves ; behind the Appia has a rigid axle on leaf springs with telescopic shock absorbers, It has a simple worm steering and hydraulically operated drum brakes on all wheels. Unlike the larger Aurelia was dispensed with the placement of the transmission on the rear axle ( Transaxle ) in the Appia . Thanks to the lighter 4-cylinder engine in the engine compartment, an aluminumbonnet and the placement of the heavy battery under the boot floor, the Appia sedan achieves an almost ideal weight distribution between the front and rear axles. In the first series of the Appia sedan were also large parts of the bodyand attachments made of aluminum, which on the one hand expensive to produce, on the other hand was not particularly suitable for everyday use, so that Lancia renounced in the other series on large-scale application of aluminum.

In addition to the sedan two coupe versions of Zagato , one of Pininfarina and a convertible of Vignale were produced. Similarly, there was based on the third series, a wagon version "Giardinetta" by Viotti. Specialists such as Garavini produced among other things ambulances on the Appia basis. 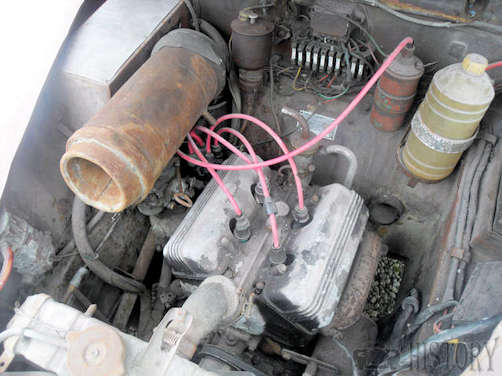