With the design of the 2000 sedan, the line of Flavia was continued from November 1970 and emphasized with its grille the Lancia tradition since the Aurelia . It was created in the Lancia styling department under the direction of Pietro Castagnero, who also designed the Fulvia . The interior was luxurious with velor fabrics and wood inserts in the dashboard. A standard, horizontally movable curtain in the rear symbolizes discretion, air conditioning was optional. The 2000 had now a standard power steering and the 2.0-liter engine. The vehicle unlike the cars from the time was driven by the front wheels with leaf spring rear end.

The quality of the workmanship and the elaboration of many details corresponded to the Lancia standard as well as the suspension. The Lancia-typical boxer engine with two central camshafts was considered to be durable and thus mileage over 300,000 km were normal.

From spring 1972, the carburetor engine was equipped with a D-Jetronic from Bosch and made 125 hp. Despite its nominally low engine power offered the sedan good performance, not least because of the gear ratio used. The sedans were at a wheelbase of 2650 mm 4620 mm long, 1610 mm wide and 1440 mm high and weighed 1230 kg. 14,500 units were manufactured, of which 5,500 were equipped with the Bosch D-Jetronic.

The Lancia 2000 Coupé was designed by Pininfarina and presented in April 1971. Compared to the Flavia Coupé, the front, the rear and the interior have been changed. Particularly striking was the tail end in the so-called dovetail design, which later also distinguished the coupe of the Lancia Gamma . The engine had first a carburetor, then a mechanical injection system .

In spring 1972, Lancia presented in Geneva an HF version of the coupe with the instruments of the Ferrari Daytona , a motor with the Bosch D-Jetronic and super-duplex brakes from Girling / Lucas fitted. Manufactured only 1200 copies, the 2000 Coupé HF is today regarded among brand connoisseurs as one of the most beautiful and best-made models from Lancia. The coupes were at a wheelbase of 2480 mm 4555 mm long, 1605 mm wide and 1340 mm high and weighed 1150 kg. 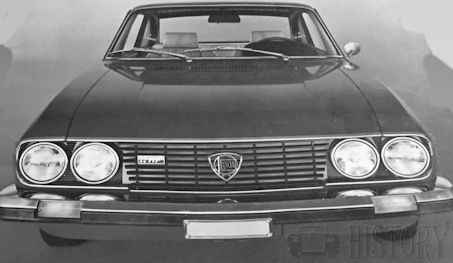