The Lancia Rally (Tipo 151, also known as the Lancia Rally 037, Lancia 037 or Lancia-Abarth #037 from its Abarth project code 037) was a mid-engine sports car and rally car built by Lancia in the early 1980s to compete in the FIA Group B World Rally Championship. Driven by Markku Alén, Attilio Bettega, and Walter Röhrl, the car won Lancia the manufacturers' world championship in the 1983 season. It was the last rear-wheel drive car to win the WRC.

In 1980 Lancia began designing the 037 to comply with the then new FIA Group B regulations that allowed cars to race with relatively few homologation models being built. As the project was number 037, this eventually became the name by which the car was known. Abarth, now a part of the Lancia-Fiat family, did most of the design work, even incorporating styling cues from some of its famous race cars of the 1950s and 1960s such as a double bubble roof line. The car was born from the collaboration between Pininfarina, Abarth, Dallara and the project manager, engineer Sergio Limone. Prior to its first participation in the 1982 World Rally Championship season, 200 road-going models were built to comply with Group B regulations.

The car made its competition debut at the 1982 Rally Costa Smeralda in Italy, where two cars were entered but both retired due to gearbox issues. The 1982 season was plagued with retirements for the 037, but the new car did manage to achieve several wins including its first win at the Pace Rally in the UK. The 1983 season was considerably more successful for the 037: Lancia took the 1983 World Rally Championship Constructors' title with Germany's Walter Röhrl and Finland's Markku Alen its principal drivers, despite serious competition from the 4WD Audi Quattro. Both drivers, however, missed the final round of the series, despite Röhrl maintaining a mathematical chance of the drivers' title: such honours instead went to Audi's veteran Finn, Hannu Mikkola.

For the 1984 Constructors' title defence, Lancia introduced an Evolution 2 version of the 037 with improved engine power, but this was not enough to stem the tide of 4WD competition, losing to Audi in both 1984 championships, and again to the 4WD Peugeot 205 T16 in its final works season in 1985. Indeed, Alen collected the final 037 win, and the sole one for the E2 model, on the 1984 Tour De Corse, before it was finally pensioned off in the Martini sponsored Lancia factory rally car line-up in favour of its successor, the uniquely supercharged and turbocharged 4WD Delta S4, for the season-ending RAC Rally in Great Britain. Driver Attilio Bettega died in a 037 crash in 1985.

For approval in Group B it was necessary to build at least 200 road versions of the model in question. The road version had an Abarth developed 16-valve four-cylinder in-line 2000 cc engine, with a volumex supercharger which developed 205 hp (153 kW) capable of pushing the 037 to over 220 km/h (137 mph) and reaching 100 km/h (62 mph) from a standstill in less than seven seconds. Pininfarina production records show 220 cars built under 'Montecarlo Corsa' name.

The Lancia Stradale car side view

The Lancia 037 was a silhouette racer; while it was loosely based on the Lancia Montecarlo (also known as Scorpion in the US and Canadian markets) road car, they shared only the center section with all body panels and mechanical parts being significantly different. Steel subframes were used fore and aft of the production car center section, while most of the body panels were made from Kevlar.

The mid-engined layout of the Montecarlo was retained, but the engine was turned 90 degrees from a transverse position to a longitudinal position. This allowed greater freedom in the design of the suspension and while moving engine weight forward.

An independent double wishbone suspension was used on both the front and rear axles, with dual shock absorbers in the rear in order to cope with the stresses of high speed off road driving. The 037 is notable as it retained the rear-wheel drive layout that was nearly universal for rally cars of the pre-Group B period; nearly all subsequent successful rally cars used four-wheel drive, making the 037 the last of its kind.

Unlike its predecessor, the V6-powered Lancia Stratos HF, the first 037s had a 2.0 liter 4-cylinder supercharged engine. Based on the long stroke twin cam which powered earlier Fiat Abarth 131 rally cars, the four valve head was carried over from the 131 Abarth but the original two carburetors were replaced by a single large Weber carburetor in early models and later with fuel injection. It features a ZF transaxle.

Lancia also chose a supercharger over a turbocharger to eliminate turbo lag and improve throttle response. Initially power was quoted at 265 hp (198 kW) but with the introduction of the Evolution 1 model power jumped to 300 with the help of water injection. The final Evolution 2 model produced 325 hp (242 kW) thanks to a displacement increase to 2,111 cc. 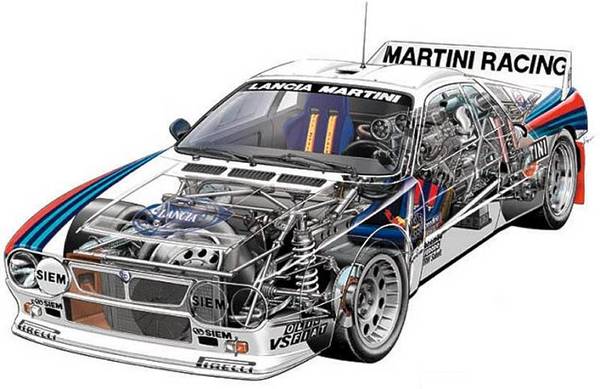