The Lancia Stratos HF (Tipo 829), widely and more simply known as Lancia Stratos, is a car made by Italian car manufacturer Lancia. The HF stands for High Fidelity. It was a very successful rally car, winning the World Rally Championship in 1974, 1975 and 1976.

A Bertone-designed concept car called the Lancia Stratos Zero was shown to the public in 1970, but shares little but the name and mid-engined layout with the Stratos HF version. A new car called the New Stratos was announced in 2010 which was heavily influenced by the design of the original Stratos, but was based on a Ferrari chassis and engine.

Lancia presented the Bertone-designed Lancia Stratos HF prototype at the 1971 Turin Motor Show, a year after the announcement of the Stratos Zero concept car. The prototype Stratos HF (Chassis 1240) was fluorescent red in colour and featured a distinctive crescent-shaped-wrap-around windshield providing maximum forward visibility with almost no rear visibility. The prototype had three different engines in its early development life: the Lancia Fulvia engine, the Lancia Beta engine and finally for the 1971 public announcement, the mid-mounted Dino Ferrari V6 producing 192 hp (143 kW).

The Stratos was a very successful rally car during the 1970s and early 1980s. It started a new era in rallying as it was the first car designed from scratch for this kind of competition The three leading men behind the entire rallying project were Lancia team manager Cesare Fiorio, British racer/engineer Mike Parkes and factory rally driver Sandro Munari.

Lancia did extensive testing with the Stratos and raced the car in several racing events where Group 5 prototypes were allowed during the 1972 and 1973 seasons. Production of the 500 cars required for homologation in Group 4 commenced in 1973 and the Stratos was homologated for the 1974 World Rally Championship. The Ferrari Dino V6 engine was phased out in 1974, but 500 engines among the last built were delivered to Lancia.Production ended in 1975 when it was thought that only 492 were made (for 1976 season, the Group 4 production requirement was reduced to 400 in 24 months). Manufacturer of the car was Bertone in Turin, with final assembly by Lancia at the Chivasso plant. Powered by the Dino 2.4 litre V6 engine that was also fitted to the rallying versions, but in a lower state of tune, it resulted in a power output of 190 bhp (142 kW; 193 PS), giving the road car a 0-60 mph time of just under five seconds, and a top speed of 144 mph (232 km/h). The car was sold as the Lancia Stratos Stradale. 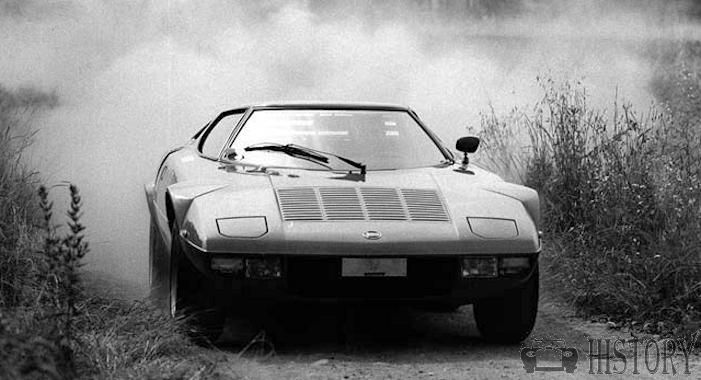 For racing, the engine was tuned up to 280 hp (209 kW) and even to 560 hp (418 kW) with a single KKK turbocharger. However, turbocharged versions were only allowed to compete in Group 5 and were never as reliable as their naturally aspirated counterparts.

The car won the 1974, 1975 and 1976 championship titles in the hands of Sandro Munari and Björn Waldegård, and might have gone on to win more had not internal politics within the Fiat group placed rallying responsibility on the Fiat 131 Abarths. As well as victories on the 1975, 1976 and 1977 Monte Carlo Rally, all courtesy of Munari, the Stratos won the event with the private Chardonnet Team as late as 1979.

Without support from Fiat, and despite new regulations that restricted engine power, the car would remain a serious competitor and proved able to beat works cars in several occasions when entered by an experienced private team with a talented driver. The last victory of. Stratos was in 1981, at the Tour de Corse Automobile, another World Rally Championship event, with a victory by longtime Stratos privateer Bernard Darniche.

When the Fiat group favoured the Fiat 131 for rallying Lancia also built two Group 5 turbocharged 'silhouette' Stratos for closed-track endurance racing. These cars failed against the Porsche 935s on closed tracks but proved successful in hybrid events. While they failed in the Tour de France Automobile, one of these cars won the 1976 Giro d'Italia Automobilistico, an Italian counterpart of the Tour de France Automobile. Unfortunately one of the cars was destroyed in Zeltweg, when it caught fire due to overheating problems. The last surviving car would win the Giro d'Italia event again before it was shipped to Japan to compete in the Fuji Speedway based Formula Silhouette series, which was never raced. The car would then be sold and reside in the Matsuda Collection before then being sold to the renowned collector of Stratos', Christian Hrabalek, a car designer and the founder of Fenomenon Ltd, who has the largest Lancia Stratos Collection in the world, 11 unique Lancia Stratos cars, including the fluorescent red 1971 factory prototype and the 1977 Safari Rally car. His interest in the car led to the development of the Fenomenon Stratos in 2005.

Another unique Group 5 car is the Lancia Stratos HF of Austrian Rallycross driver Andy Bentza. The car was first driven by his Memphis team mate Franz Wurz, father of Formula One pilot Alexander Wurz. In 1976 Wurz claimed the first ever European Rallycross title recognised by the FIA with the car, by then still featuring a 2.4 litre engine with 12 valve head. For the ERC series of 1977 Wurz was entrusted with an experimental 24 valve engine by Mike Parkes, equipped with a special crankshaft to bring the engine capacity up to just under 3000 cc. For 1978 Bentza took the Stratos over from Wurz, sold his own 2.4 litre 12V Stratos to compatriot Reneé Vontsina, and won the GT Division title of the ERC. The one and only 3.0 litre Stratos was raced by Bentza till the mid 1980s, is nowadays still his property and ready to race.

The Lancia Stratos 0 (or Zero) pre-empted the Lancia Stratos HF prototype by 12 months and was first shown to the public at the Turin Motor Show in 1970. The futuristic bodywork was designed by Marcello Gandini, head designer at Bertone, and featured a 1.6 litre Lancia Fulvia V4 engine The Lancia Stratos HF Zero stayed for a long time in Bertone's museum, and in 2011 was sold out during an auction in Italy for €761.600

The body was wedge-shaped, finished in distinctive orange and was an unusually short (3.58 m (141 in)) length and only 84 cm (33 in) tall, and shared little with the production version. The Zero appeared in Michael Jackson's 1988 film, Moonwalker as well as in his music video for Smooth Criminal.

In 1978, Bertone created and designed a concept car based on the Stratos called the Sibilo, although it was never intended for production.