The first Delta (Type 831) was a five-door hatchback designed by Giorgetto Giugiaro and released in 1979. For a period of time, it was also sold in Sweden by Saab Automobile, badged as the Saab 600. For a few years after its launch, the Delta was one of the most contemporarily styled cars of its class in Europe and was voted 1980 European Car of the Year.

The Delta range was first introduced to the United Kingdom in 1980 and remained virtually unchanged until 1986, when small changes were made to the cars' body shape, the engines updated and the four-wheel drive model introduced.

While the majority of Delta models were ordinary small family cars, the most famous model was the Delta HF Integrale, a four-wheel drive hot hatch with a powerful turbocharged petrol engine. A tweaked version of the HF dominated the World Rally Championship, scoring 46 WRC victories overall and winning the Constructors Championship a record six times in a row from 1987 to 1992, in addition to Drivers' Championship titles for Juha Kankkunen (1987 and 1991) and Miki Biasion (1988 and 1989).

The Lancia Delta S4, which the works team ran immediately prior to the HF 4WD and Integrale models' world championship careers from the season-ending 1985 RAC Rally until the end of the 1986 season, while sharing the same name and appearance, was a Group B race car designed specifically for rallying, and was entirely different from the commercial Delta in terms of construction and performance.

The abolition of Group B in rallying at the end of the 1986 season left Group A as the top-line formula. As related below, the Delta HF 4WD was not ideally suited to Group A rallying, but it was developed into a highly successful competitor.

As a road car, superseding the Delta HF Turbo as the flagship of the Delta range — S4 excepted — the HF 4WD had a lot to live up to. The HF Turbo was no slouch and its handling was praiseworthy for a front-wheel drive car.

One of the features of the Delta HF 4WD is the under-statement of the body styling. There is very little to distinguish the car from the earlier 'Turbo i.e.' apart from the four-headlight system, fog lamps mounted in the front spoiler, discreet 4WD badging on the rear hatch, small side skirts and two raised air intakes on the bonnet (hood). The later car is therefore virtually indistinguishable from the 1600 cc HF Turbo i.e.

In the Delta HF 4X4, Lancia opted for a four-wheel drive system with an in-built torque-splitting action to ensure that the available power was going to the wheels with the most traction at any given time, thus ensuring the most efficient use of the available power and torque.

The Torsen differential is a true 'intelligent' differential in the way it distributes torque. It divides the torque between the wheels according to the available grip, and does so without ever locking fully: maximum lockup is 70%.

Standard differentials are either free-floating or self-locking. Free-floating systems are good at differentiating between wheel speeds on bends, but always supply the same amount of torque to both wheels. In this situation, however, there is a risk that the wheel with the lighter load (on an incline, for example) or less grip, will lose traction. To counteract this possibility, totally self-locking differentials ensure that both wheels rotate at the same speed but in doing this, prevent free differentiation in cornering, to the detriment of handling and stability.

The basic suspension layout of the Delta 4WD remains the same as in the rest of the two-wheel drive Delta range: MacPherson strut–type independent suspension with dual-rate dampers and helicoidal springs, with the struts and springs set slightly off-centre.

There are a few more subtle changes, though, with the suspension mounting points to the body shell, now better insulated by incorporating flexible rubber links to provide improved isolation. Progressive rebound bumpers have also been adopted, while the damper rates, front and rear toe-in and the relative angle between springs and dampers have all been altered. The steering retains the rack and pinion mechanism of the rest of the Delta range, but in this application it is power-assisted. Steering effort has been reduced further by fitting thrust bearings of the ball, rather than roller type. Additional steering sensitivity has also been obtained by adjusting the angle of incidence of the steering rack.

Lancia designed the HF Integrale to incorporate the advanced technical features of the Delta HF 4WD, and to address its shortcomings as a rally car. The result is a stylish, luxurious yet utterly practical five door hatchback with impeccable road manners, but capable of a blistering 0–100 km/h (0–62 mph) acceleration in just 6.6 seconds and a maximum speed of 133 mph (214 km/h).

The HF Integrale transmission systems incorporates permanent 4-wheel drive, a front transversely mounted engine and five-speed gearbox. An epicyclic centre differential normally splits the torque 56 per cent to the front axle, 44 per cent to the rear. However a noiseless, fully automatic Ferguson viscous coupling balances the torque split to give the optimal division between front and rear axles depending on road conditions and tyre grip. The Torsen rear differential further divides the torque delivered to each rear wheel according to grip available. By using the interaction between a worm screw and helical gear (movement is transmitted from screw to gear only) the Torsen system ensures that the wheel with less weight or grip receives less torque and therefore maintains traction. A free floating front differential completes the system to ensure maximum traction even at speed on adverse road surfaces. A shorter final drive ratio (3.111 instead of 2.944 on the HF 4WD) is used to match the larger 6.5x15 wheels to give 24 mph/1000 rpm (39 km/h per 1000 rpm) in fifth gear.

Both braking and suspension were uprated to match the HF Integrale's increased performance. The ventilated front discs were increased in diameter to 284 mm (11.2 in), improved friction coefficient pads were fitted to the rear brakes. A larger brake master cylinder and servo lessened pedal effort for quicker response and reduced the risk of overheating in even the most demanding situations. The all round independent suspension features new front springs, dampers and front struts.

To match the mechanical improvements and higher performance, Lancia gave the HF Integrale a new, more purposeful look while retaining all the practical advantages of the five door body shell. Immediately noticeable are the rounded, bulged wheel arches housing the wider section 195/55 VR tyres on 15-inch 6J alloy wheels. A new bonnet incorporated air louvres while the restyled bumpers wrapped around to meet the wheel arches at front and rear. The front bumper, now wider, incorporates air intakes to assist engine cooling, and houses rectangular auxiliary driving lights, that complement the twin circular headlights. The side skirts are faired into the wheel arches at front and rear and carry "Delta HF Integrale" badges to complement those on grille and rear hatch. The twin rear view mirrors are finished in body colour.

Despite the fact that the 8v Integrale had dominated the 1988 World Rally Championship, Lancia knew that further development, and particularly more power, was needed to keep the car competitive with newer rivals. Accordingly, the 16v Integrale was developed, and made a winning debut on the 1989 San Remo Rally.

The new car was identifiable from its predecessor by the raised centre of the bonnet to accommodate the new 16 valve engine. The other exterior changes visible were; wider wheels and tyres and new identity badges front and rear. The torque split was changed to 47% front and 53% rear, to give the car better handling characteristics. The 16 valve integrale was published in 1989 Geneva Motorshow.

The turbocharged 2-litre Lancia 16v engine is already a powerful, refined performer, but was further developed for the Integrale 16v. Generating 200 bhp (149 kW) at 5500 rpm, it can take the car to a maximum speed of 137 mph (220 km/h) and get it from 0–100 km/h (0-62 mph) in 5.5  seconds. Larger injectors provide higher power output and efficient exploitation of the fuel feed at high engine speeds. The response of a Garrett T3 turbocharger is immediate, thanks to the reduced inertia of the turbine. A highly efficient intercooler provides the driver with more power and greater reliability. The new over-boost system uses a proportional electrovalve, to give a lift to engine torque: 220 lbf·ft (298 N·m) at 3000 rpm. All these improvements make the road-going version of the Integrale 16v a spirited, reliable and inherently safe car. The engine can also run on unleaded fuel without modification. 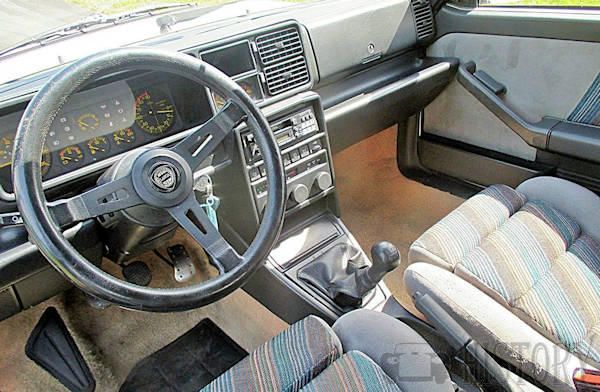 The first Evoluzione cars were built at the end of 1991 and through 1992. These were to be the final homologation cars for the Lancia Rally Team; the Catalytic Evoluzione II (below) was never rallied by the factory.

In order to improve the handling, the Evoluzione I had a wider track front and rear than earlier Deltas. In order to enclose this track in the bodywork, the wide arches were extended even further and in the process also became more rounded. The wings were now made in a single pressing, whereas previously they had been fabricated. The front strut top mounts were also raised, in the quest for more grip: this then necessitated a front strut brace to control the forces thus generated.

External changes included: new grilles in the front bumper to improve the air intake for engine compartment cooling; a redesigned bonnet (hood) with new lateral air slats to further assist underbonnet ventilation; an adjustable roof spoiler above the tailgate to assist in competition and to emphasise the cars sporty lines; new five-bolt (stud) wheels derived from the rally cars (stronger than the previous design); and finally, the rear of the car was changed with only one exhaust pipe now showing.

The engine, although technically the same as the earlier 16V cars, was remapped to give 210 bhp (157 kW) at 5750 rpm in order to compensate for the slight increase in weight and increased frontal area. This kept the performance figures virtually unchanged.

The above improvements were aimed at, and did change, the cars' handling potential, with the new car being able to travel 5–6% faster over rally sections both tarmac and gravel. The result was even greater driver confidence when driving in normal road conditions.

Interior trim was now Grey Alcantara as standard, covering the same Recaro seats as fitted to the earlier 16V cars; leather and air conditioning were offered as options. The interior was finished with a new anotomic grip gear lever and leather-covered Momo steering wheel.

A number of Evoluzione I cars and 16V Integrale were built to meet Swiss regulations and were consequently equipped with an 8-valve engine complete with catalytic converter, producing 177 PS (185PS with overboost). The Swiss Lancia dealer network offered an upgrade of 200Ps with full warranty for the 8-valve engine, up to 260PS with a reduced warranty.

Presented in June 1993, the second Evolution version of the Delta HF Integrale featured an updated version of the 2-litre 16-valve turbo engine to produce more power, as well as a three-way catalyst and Lambda probe. The addition of the catalyst did not penalise performance Indeed, the Evoluzione II produced more power and torque than its predecessor, the Evoluzione I. That's because Lancia added a series of technical improvements which may be summed up as follows:

A Marelli integrated engine control system with an 8 MHz clock frequency which incorporates:

In order to underline the even more advanced engineering and performance of the 1993 version, the new Integrale was also given a cosmetic and functional facelift.

The sporty look of the new Delta was highlighted by an aluminium fuel cap and air-intake grilles on the front mudguards designed to increase airflow. 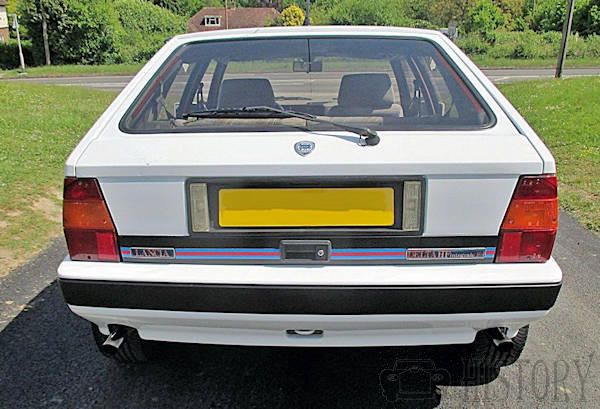