During the early 1980s the top level of rallying was dominated by the Group B formula, for which Lancia produced the rear-drive 037 and then, when that became obsolete, the Delta S4. The entire formula was abolished at the end of the 1986 season, however, after a string of fatal accidents, leaving Group A as the top formula for the 1987 and subsequent seasons.

The sudden change in the rules left many manufacturers without a suitable car, with the exception of Lancia. The Delta HF 4WD (Abarth SE043), with its two-litre turbocharged engine and four-wheel-drive, was clearly a more suitable Group A rally car than its rivals, the underpowered Mazda 323 and Ford Sierra XR4x4, the powerful but rear-drive Sierra Cosworth and BMW M3, and the front-drive Opel Kadett GSi and Renault 11 Turbo. However, it was not without flaws. The wheel arches were restrictive, the wheels and therefore the brakes were too small, and the suspension travel was limited. Access to key components for servicing was also restricted by the car's compact size and transverse-engined layout, the one defect that subsequent evolutions could not fully rectify. Even so, little doubt was expressed before the 1987 season began that Lancia, and one of its drivers, would win the World Championship.

In 1987 the Lancias were driven by Massimo Biasion, Juha Kankkunen and Markku Alén. Biasion opened with victory in the Monte Carlo Rally and later in the season won the Argentina and Sanremo rallies. However, Juha Kankkunen’s four podium places, coupled with victories on the Olympus Rally and the final round, the RAC Rally, saw him clinch the title ahead of Markku Alén, whose title hopes ended on the RAC with a series of accidents, including overturning the car in front of the television cameras on one of the opening day's short spectator stages. Lancia won seven of the eleven rounds which counted towards the manufacturers’ championship and with them the world title. However Kankkunen, reputedly disillusioned with team politics and the apparent favoritism shown towards Biasion, left the team at the end of the season and rejoined Toyota.

The Delta HF 4WD also won the first two events of the 1988 season, Bruno Saby taking the win at Monte Carlo and Markku Alén in Sweden, before the Integrale 8V (Abarth SE044) appeared at the third round in Portugal. Team boss Cesare Fiorio remarked in an interview before that event that the Integrale’s larger wheels, bigger brakes, improved suspension and greater power would make it more competitive on asphalt, although on gravel it represented a relatively small improvement over the 4WD. Markku Alen went out with transmission failure early in the event, giving rise to some concern about the strength of the transmission and causing the team to undertake a great deal of precautionary maintenance to Biasion's car. However, the Italian driver suffered no serious mechanical problems and continued to take victory. A new and stronger six-speed gearbox was already under development and was introduced for the next event. Lancia then dominated the rest of the season. Only once were they beaten in a straight fight, on the dry asphalt of Corsica by Didier Auriol in a Ford Sierra RS Cosworth. By the season’s end Lancia had won ten of the eleven rounds which counted for the manufacturers’ series, and Biasion was drivers’ World Champion, having clinched the title on the penultimate round. Markku Alén rounded off the season with victory on the RAC Rally, a personal first for the Finn.

Martini Lancia continued their domination of the sport for a third year in 1989, winning the first six rallies in which manufacturer points were awarded, and ultimately winning the title with plenty of room to spare. Italian Miki Biasion, Finn Markku Alén and Frenchman Bruno Saby returned to the team, while other successful drivers employed by the team through the year included French native Didier Auriol, Swede Mikael Ericsson, and Argentine driver Jorge Recalde. The team drove the Lancia Delta Integrale 8V through the year, until the Sanremo Rally, where the Integrale 16V (Abarth SE045) made its début (where, for the first and only time, it ran in Italian racing red). Biasion seized the championship handily, becoming the WRC's second repeat champion.

Lancia continued to use the Integrale 16V throughout the 1990 season. Juha Kankkunen rejoined the team, joining Biasion and Auriol. Lancia won the manufacturers’ title, with six wins, but these were shared between the team's three drivers, and in the drivers’ title race Sainz, driving a Toyota Celica GT-Four ST165, took the lead. The issue was eventually settled on the RAC Rally, when Kankkunen crashed whilst leading, leaving the Spanish driver to take the title, the first time since 1986 that Lancia had not won both drivers’ and manufacturers’ championships.

The 1991 season saw another close battle between Toyota and Lancia. There was some pre-season speculation that the Delta was now outclassed by the Celica, an impression reinforced by Carlos Sainz's win on the opening round, the Monte Carlo. However, in the hands of Juha Kankkunen the Delta took wins in Kenya, Argentina, Finland and Australia, and Didier Auriol also won at Sanremo, giving Lancia the manufacturers’ title for a record fifth time. Meanwhile, Sainz crashed out in Australia and retired with electrical failure in Catalunya, putting Kankkunen in contention for the driver’s title. By this time Toyota and Lancia were reputedly working with blank checks and win-at-all-costs budgets from their parent companies, and rumors abounded of creative interpretations of the rules, especially on the part of Lancia. However, nothing was ever proven, although it was common knowledge that all of the major Group A cars had far more power than the notional 300 bhp limit, probably closer to 400 in most cases. The Lancia was among the most powerful, which, along with its reliability, accounts partly for its continued success in the face of handicaps such as poor weight distribution (the Delta was always nose-heavy) and a transmission system less sophisticated than that of the Toyota. The 1991 RAC Rally saw a close battle in the British forests between Kankkunen and Sainz, which was settled late in the event when the head gasket blew on Sainz's Toyota, giving Kankkunen his third driver's championship.

During the latter part of the season, Lancia developed the Evoluzione version of the Delta (Abarth SE050), sometimes nicknamed the 'Deltona' or 'Super Delta,' which would début on the 1992 Monte Carlo. This final evolution, with its stiffer body, wider wheel arches, bigger wheels and brakes, improved suspension and aerodynamics and more powerful engine, was 5-6% faster under most circumstances than the 16v car. However, it represented the most that could be extracted from a design that was fundamentally outdated and, with no successor planned, Lancia officially withdrew from rallying at the end of 1991. For the next two seasons the cars would be run by the semi-private Jolly Club team, albeit initially with continuing support from the factory.

For 1992 Toyota had an all-new Celica, in contrast to Lancia’s updated Delta, leading to renewed speculation that Lancia would be outclassed. In fact the Celica initially proved problematic and Auriol dominated the early part of the season for Lancia, taking a record six wins and pulling out a large championship lead. Kankkunen also scored consistent podium finishes and a win in Portugal, whilst guest driver Andrea Aghini won the Rallye Sanremo. Lancia therefore took the manufacturers’ title for a sixth consecutive year. Meanwhile, Sainz initially struggled with the new car and slipped behind, even struggling at times to beat a resurgent Ford team with its rather unwieldy Sierra, but a late-season fight-back by the Spaniard, coupled with retirement in Sanremo and only tenth place in Catalunya for Auriol, saw Kankkunen, Auriol, and Sainz enter the RAC rally within three points of each other. The three-way title race was decided when Auriol’s engine failed and Kankkunen went off the road, leaving Sainz to take an unexpected second driver’s title. Sainz soon after competed in 1993 in the by then Jolly Club backed Lancia Delta HF Integrale, but with limited success, marking the end of the competitive career of the Lancia Delta Group A. 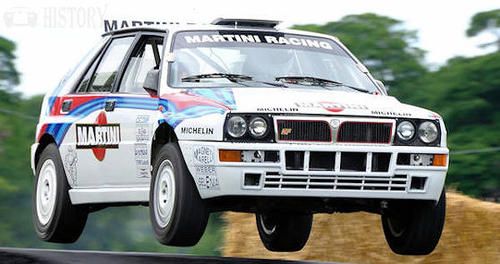