The Lamborghini Faena is a four-door concept car by Pietro Frua , which is technically based on the Lamborghini Espada . It was created in 1978 as a single piece and was one of the last models from Frua.

The Faena was a proposal for a possible successor to the two-door, four-seater Lamborghini Espada.The Faena was first born in the first months of 1978. It was first introduced at the Turin Motor Show in May 1978; There it stood on the stand Fruas. Two years later, the car reappeared at the Geneva Motor Show , this time at Lamborghini's stand. A month later, a Swiss privateer bought the car.  After a restoration in 2006, it is occasionally shown at exhibitions.

The Faena is often referred to as a four-door hatchback coupe. From a technical point of view,the basis of the Faena was a Espada (Series 2) made in 1970, which was delivered to a customer in Venezuela (chassis number 8224). At the end of 1977, Frua took over the vehicle. The only change was an extension of the wheelbase by 18 cm, which served to increase the footwell in the vehicle fund.

It was a long, flat vehicle with a hatchback, proportions similar to those of the Espada. The roofline fell off behind the C-pillar ; At the end, like the Espada, was a steeply-spaced rear window. The horizontally arranged taillights came from the Citroën SM . The front end was slightly wedge-shaped.The car had a radiator grille across the width of the car above were folding headlights, Stylistically, Frua reverted to his earlier designs: the front of the car was similar to a coupe that Frua designed on the basis of a BMW in 1975, and the shape of the rear sideline was similar to that of a design for an Audi coupe.  The interior was equipped with four individual seats. 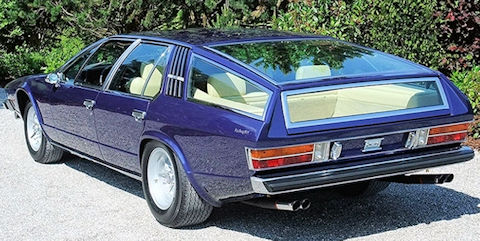