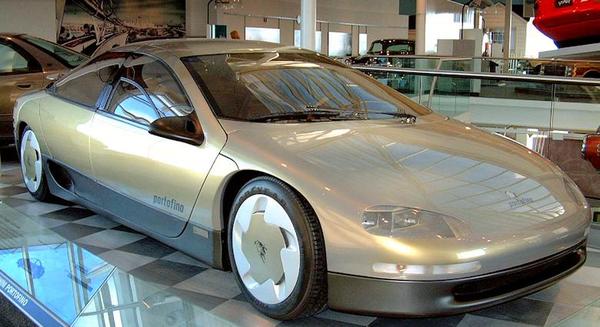 The Lamborghini Portofino was a concept car developed for Lamborghini by Kevin Verduyn, one of Chrysler's chief designers. Introduced at the 1987 Frankfurt Auto Show, it was a fully functional, four-door, four-seat sport sedan.

In 1986, Kevin Verduyn designed a concept car model for Chrysler called the Navajo.The concept never went beyond the clay model stage, but when Chrysler acquired Automobili Lamborghini S.p.A. in 1987, the design was resurrected and with some fairly minor tweaks, turned into the Portofino.

The Portofino was built by Coggiola of Turin, Italy on a lengthened Jalpa chassis, giving the car a mid-engine rear-wheel drive layout. It also made use of the Jalpa's 3.5 L V8 water-cooled engine and 5 speed transmission. The engine could give 7,000rpm, with 64.6 bhp/liter.The most interesting feature of the Portofino were the front scissor doors, like the Countach, though the back were suicide-style rear-hinged-doors. The logo on the hood featured the Lamborghini bull inside the Chrysler pentastar.

While the Portofino was a one of a kind concept and Chrysler ownership of Lamborghini would not survive, the concept's design would inform and influence Chrysler cars for the next two decades. The wide low stance and open plan interior would become the hallmark of the Chrysler LH body vehicles and their "cab-forward" design standard. The triangular headlights and dual notched rear indicators would find their way directly to the first generation Dodge Intrepid and serve as key design points throughout that vehicle's existence. 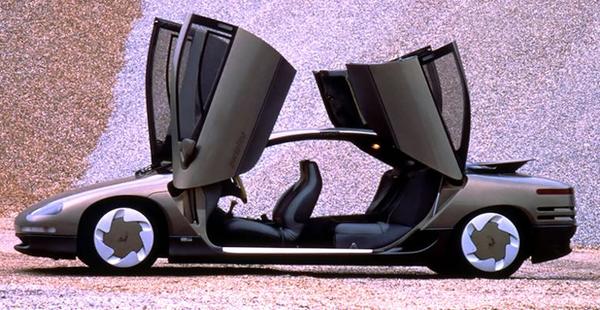 One Of A Kind

Only the single prototype Portofino, chassis #LC0001, was ever produced. In 1991, it was heavily damaged in an accident in transit. However, Chrysler had it restored by Metalcrafters in Costa Mesa, CAfor $300,000, and it is now on display at Chrysler headquarters in Auburn Hills, Michigan.

The Portofino was notable for being an early example of cab forward styling, and many aspects of its design made it into the Chrysler LH platform which initially included the Chrysler Concorde, Dodge Intrepid and Eagle Vision.