The Lamborghini Reventón is a mid-engine sports car that debuted at the 2007 Frankfurt Motor Show. It was the most expensive Lamborghini road car until the Lamborghini Sesto Elemento was launched, costing two million dollars (~€1.5 million, or ~£840,000). Its top speed was recorded in Dubai, UAE at 221 miles per hour (355.7 km/h). The official press release stated that only 20 vehicles would be sold to the public, with one additional car (marked as 00/20) produced for the Lamborghini museum. Although early rumors indicated the total number would actually be 100, each Reventón is stamped with its number in the sequence of 20 between the driver's and passenger's seats.

Despite the exterior being new, almost all the mechanical elements (including the engine) are sourced directly from the Murciélago LP640. According to the official press release, the Reventón's exterior styling was inspired by "the fastest airplanes".

The Reventón is named for a fighting bull, in line with Lamborghini tradition. The bull, raised by Don Heriberto Rodríguez, was best known for killing famed Mexican bullfighter Felix Guzmán in 1943. Reventón means "small explosion" or "burst" in Spanish, when used as a noun. In the vernacular, it is also used to define a very large party or a night in town. In automotive terms, it means "blowout or flat tire" when used as a noun. When it was used as the name of a bull, however, it was intended to be interpreted as an adjective, a quality or property of that bull in particular. In this last sense, reventón means "he who seems to be about to burst". Or, in the case of a flower (a carnation, un clavel reventón) in its maximum point, of luxuriance or a mouth (una boca reventona), for its beauty and fullness.

The instrument panel in the Reventón comprises three TFT liquid crystal displays (LCDs) with two different display modes. The instruments are housed in a structure milled from a solid aluminium block, protected by a carbon fiber casing. The car's instrumentation includes a "g-force-meter" which displays the magnitude and direction of the g-forces acting upon the car. The seats of the Reventón are black leather and brown Alcantara.

The Reventón features an all-new carbon fiber exterior. All Reventóns have the same exterior color, described as "mid opaque grey without the usual shine."

Lamborghini has also picked up some of parent company Audi's design language. It is the first Lamborghini to incorporate daylight running lights into the headlamps. Seven light-emitting diodes (LEDs) at each headlamp flank the bi-xenon main beam and stay lit whenever the car is in movement. Due to the high temperatures in the rear lower part of the car, special heatproof LEDs are used for the indicator and hazard lights, stoplights and rear lights with a triple arrow optical effect. The Reventon's exterior was created a basis for company's current flagship Aventador

The first car went to Lamborghini of Las Vegas and was allegedly sold to Khalid Abdul Rahim of Bahrain.

On 21 November 2008, Lamborghini announced the delivery of the last Lamborghini Reventón to a British customer of the official Midlands dealer, Lamborghini Birmingham. However, CarsUK's later report disputed the official claim, and revealed that the car No.20 was delivered to Lamborghini Houston, as were two other cars.

Of the original 20 coupes, 10 were delivered to the United States, seven to Europe, one to Canada, and two to Asia. One of them is in the possession of controversial Chechen leader, Ramzan Kadyrov.

A roadster version of the vehicle was unveiled at the 2009 Frankfurt Motor Show. The car would use the engine from the Murciélago LP 670–4 Super Veloce. Autocar has since published a report, in June 2009, saying that potential buyers have been shown the car–although a Lamborghini spokesman told the publication that reports of the car were "just speculation". Production was set for a run of 15 units, with a MSRP of €1,100,000. The Reventón Roadster has a slightly lower top speed than the Reventón, its top speed is 205 mph and it takes just 3.3s to reach 62 mph. 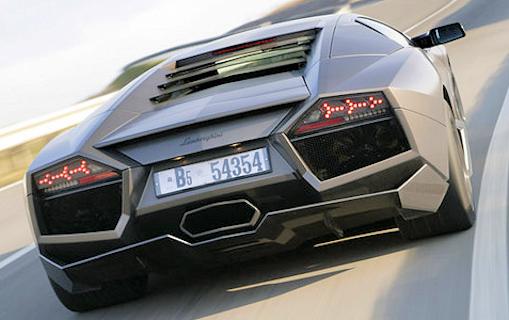