The Lamborghini Huracán (Spanish for "hurricane") is a sports car built by Lamborghini that replaces Lamborghini's sales leader and most produced car, the Gallardo. The Huracán made its auto show debut at the 2014 Geneva Auto Show,and is scheduled to be released in the second quarter of 2014.

The Huracán's name (huracán being the Spanish word for hurricane) is inspired by a Spanish fighting bull, similar to various other Lamborghini car models. Huracán was a bull known for its courage that fought in 1879. Also Huracan is the Mayan god of wind, storm and fire.

The vehicle was unveiled in 2014 Geneva Motor Show, with deliveries set to begin in spring 2014. The Huracán will be comparable to the McLaren 650S and the Ferrari 458.

The price of the Huracán with extra options added reaches to over $320,000, or £200,000. The base price for the Huracán in the United States is $241,945, and around £180,720 in the UK. Extra options that increase the price of the car include interior enhancements, special paint schemes, improved suspension, and a lifting system, as well as multiple components optionally available in carbon fiber, rather than aluminium. Taiwan models went on sale for NT$15,080,000. In early 2015, the Huracán appeared on the motoring magazine Top Gear. It got a neutral review from Richard Hammond who said that it was too tame to be a "proper Lamborghini." However, it got around the Top Gear test track in 1:15.8 which is faster than any other Lamborghini to go around the track to date, including the Aventador.

The Huracán LP 610-4 Polizia is the official police car version of the Lamborghini specifically produced for the Italian State Police. This model sports various features not included in the civilian 610-4 Coupe, such as blue Polizia body colour, white stripes and lettering following the Huracán's dynamic design language, a video system positioned in the centre of the cabin with a camera fitted next to the rear view mirror, a computer, recording equipment behind the seats, a Proof Video Data System, gun holster, police radio equipment, a Paletta (the traditional hand-held stop sign used to advise motorists and traffic offenders to pull over), a removable screen, a refrigeration system at the luggage compartment in the front of the vehicle, a defibrillator, and a police beacon with blue LEDs around the base and white LED signals on the front, sides and rear of the light's aluminium shell.

The vehicle was unveiled at the "Piero Taruffi" Vallelunga (ITA) circuit. 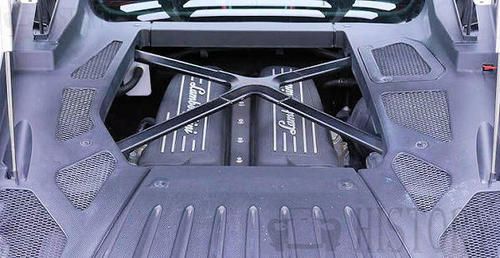 The Huracán maintains the 5.2 L naturally aspirated Audi/Lamborghini V10 engine from the Gallardo, tuned for 610 PS (449 kW; 602 hp). To ensure its balance and performance, the car is mid-engined. The V10 has both direct fuel injection and multi-point fuel injection. It combines the benefits of both of these systems; it is the first time this combination is used in a V10. To increase its efficiency the Huracán's engine also includes a start-stop system.

The car has a 7-speed dual clutch transmission, Lamborghini's new 'Doppia Frizione' (Dual Clutch) gearbox. The transmission performs differently depending on the mode the driver has selected.The Huracán will only be available with automatic transmission; manual will not be offered.

The Huracán also has a magnetically controlled suspension system. It utilises magnetorheological dampers to very quickly change how the suspension acts, ensuring performance as well as usability.

The Huracan has various components in common with the next generation Audi R8. This is due to both of the cars' utilization of Volkswagen Group sportscar technology. 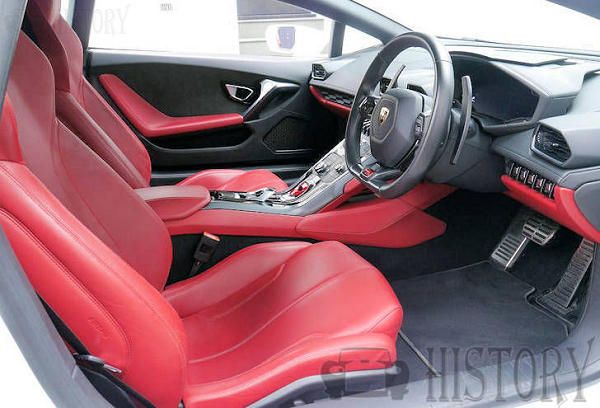 The Huracán features various interior options for more comfort inside the car. It features a choice for full electric control and heating of the sport seats in addition to the standard lengthwise alignment and electric backrest. The car also has an optional navigation system and leather upholstering. The Huracán is one of the first sports cars moving infotainment out of the center stack: Lamborghini Infotainment System. The result: a display that lets the driver decide what they want to see. It is the first vehicle to use the 12.3 inch TFT virtual cockpit from parent company Audi, which is available with high-definition (1440 x 540) 3D computer graphics, Bluetooth, Google Earth GPS navigation and Multi Media Interface-like menu and dashboard controls, all powered by Nvidia Tegra 3.

Various aspects of the Huracán are technologically advanced. The car has full LED headlamps, which ensures higher contrast in night conditions. Also, the Huracán has optional "Lamborghini Dynamic Steering" (LDS) to add to the standard power steering. The Dynamic Steering changes the steering performance from normal, comfortable steering to a racing feeling. The main control for changing the car's performance according to driving conditions is the mode selector ANIMA (Adaptive Network Intelligent Management). ANIMA controls the engine, the transmission, LDS, the all-wheel drive, magnetorheological suspension, and the electronic stability control. The driver can select street, sport, or race mode to alter how systems like the engine or transmission respond while driving. Depending on what mode is selected, even engine sound is different.

It is the world's first series production car with an aviation-derived inertial navigation system: Lamborghini Piattaforma Inerziale (LPI). This carries out precise measurements of the vehicle movements uses on board sensors (3 accelerometers and 3 gyroscopes) linked to ANIMA via high-speed FlexRay CAN bus. 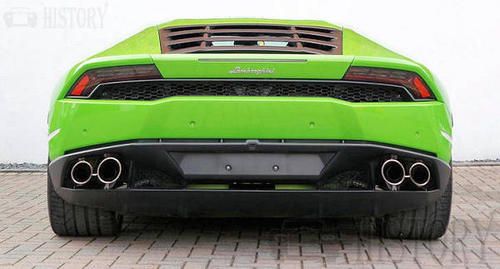 More information on
Lamborghini Huracán car range from 2014 to present