The Lamborghini Islero is a sports car produced by Italian automaker Lamborghini between 1968 and 1969. It was the replacement for the 400GT and featured the Lamborghini V12 engine. The car debuted at the 1968 Geneva Auto Show. The Islero (pronounced "eez-LEHR-oh") was named after a Miura bull that killed famed matador Manuel Rodriguez "Manolete" on August 28, 1947 (Lamborghini also produced a car named the Miura, from 1966 to 1973).

Since Carrozzeria Touring, the company that designed Lamborghini's chassis, was bankrupt, Carrozzeria Marazzi was the next logical choice as it was funded by Mario Marazzi, an old employee of Touring. The design was essentially a rebody of the 400GT, but the track was altered to allow for wider tires and while the Islero's body suffered from a lack of proper fit between the panels, its good outward visibility, roomier interior, and much improved soundproofing made it an improvement over previous models. It had a 325 brake horsepower (242 kW; 330 PS) 4.0 L (3929 cc) V12 engine, a five-speed transmission, fully independent suspension, and disc brakes. Its top speed was rated at 154 mph (248 km/h) and acceleration from zero to 60 mph (97 km/h) took 6.4 seconds. Only 125 Isleros were built. When leaving the factory the Islero originally fitted Pirelli Cinturato 205VR15 tyres (CN72).

An updated Islero, dubbed the Islero S, was released in 1969. The engine in this model was tuned to 350 brake horsepower (260 kW; 350 PS), but the torque remained the same. There were quite a few styling changes, including brightwork blind slots on the front fenders, an enlarged hood scoop (which supplied air to the interior of the car, not the engine), slightly flared fenders, tinted windows, round side-marker lights (instead of teardrops on the original), and a fixed section in the door windows. Various other changes included larger brake discs, revised rear suspension and revamped dashboard and interior. The top speed of the S improved to 161 mph (259 km/h) and acceleration from zero to 60 mph 6.2 seconds. Only 100 examples of the Islero S were built, bringing the production total of the Islero nameplate to 225 cars. Ferruccio Lamborghini himself drove an Islero during that era - as did his brother Edmondo. The car is also famous for its appearance in the Roger Moore thriller The Man Who Haunted Himself.

Lamborghini Islero in The Man Who Haunted Himself. movie from 1970 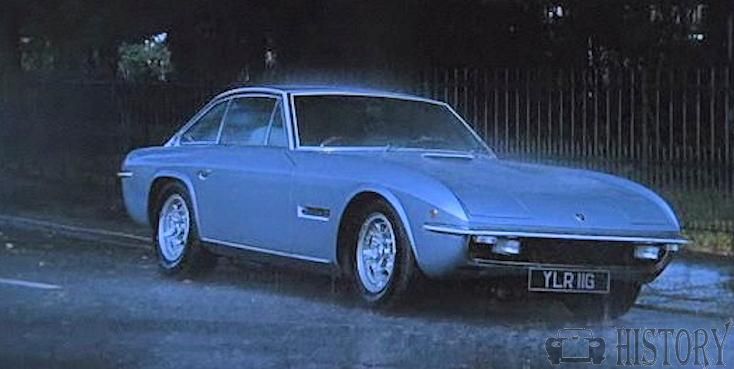