The Lamborghini Miura is a sports car that was produced by Italian automaker Lamborghini between 1966 and 1973. The car is widely considered to have instigated the trend of high performance, two-seater, mid-engined sports cars. At launch, it was the fastest production road car available.

The Miura was originally conceived by Lamborghini's engineering team, who designed the car in their spare time against the wishes of company founder Ferruccio Lamborghini, who showed a preference towards producing powerful yet sedate grand touring cars, rather than the racecar-derived machines produced by local rival Ferrari. When its rolling chassis was presented at the 1965 Turin auto show, and the prototype P400 debuted at the 1966 Geneva show, the car received a stellar reception from showgoers and motoring press alike, who were impressed by Marcello Gandini's sleek styling as well as the car's revolutionary design.

As Lamborghini's flagship car, the Miura received periodic updates and remained in production until 1973, and was not replaced in the automaker's lineup until the Countach entered production in 1974, amid tumultuous financial times for the company.

During 1965, Lamborghini's three top engineers, Gian Paolo Dallara, Paolo Stanzani, and Bob Wallace put their own time into the development of a prototype car known as the P400. The engineers envisioned a road car with racing pedigree – a car which could win on the track and be driven on the road by enthusiasts. The three men worked on the car's design at night, hoping to sway Lamborghini from the opinion that such a vehicle would be too expensive and would distract from the company's focus. When finally brought aboard, Lamborghini allowed his engineers to go ahead, deciding that the P400 was a potential marketing tool, if nothing more.

The car featured a transversely-mounted mid-engine layout, a departure from previous Lamborghini cars. The V12 was also unusual in that it was effectively merged with the transmission and differential, reflecting a lack of space in the tightly-wrapped design. The rolling chassis was displayed at the Turin Salon in 1965. Impressed showgoers placed orders for the car despite the lack of a body to go over the chassis.

Bertone was placed in charge of styling the prototype, which was finished just days before its debut at the 1966 Geneva motor show. Curiously, none of the engineers had found time to check if the engine fit inside its compartment. Committed to showing the car, they decided to fill the engine bay with ballast, and keep the hood locked throughout the show, as they had three years earlier for the début of the 350GTV. Sales boss Sgarzi was forced to turn away members of the motoring press who wanted to see the P400's power plant. Despite this setback, the car was the star of the show, making stylist Marcello Gandini a star in his own right.

The favourable reaction at Geneva meant the P400 was to go into production by the following year, under a different name, Miura. The name along with the company's newly created trade-mark badge were taken from a type of fighting bull. The Miura gained a worldwide audience of automotive enthusiasts when it was chosen for the opening sequence of the original 1969 version of The Italian Job. In press interviews of the time company boss Ferruccio Lamborghini was reticent about his precise birth date, but stressed that he was born under the star sign Taurus.

Taking a cue from the Mini, Lamborghini formed the engine and gearbox in one casting thus sharing common lubrication this continued until the last 96 SVs, which used a limited slip differential and thus required appropriate oil in separate systems.

It has been reported, but not confirmed, the first 125 Miuras were built of 0.9mm steel and are therefore lighter than later cars. All cars had steel frames and doors with aluminum front and rear skinned body sections. When leaving the factory they were originally fitted with Pirelli Cinturato 205VR15 tyres (CN72).

The P400S Miura, also known as the Miura S, made its introduction at the Turin Motorshow in November 1968, where the original chassis had been introduced 3 years earlier. It was slightly revised from the P400, with the addition of power windows, bright chrome trim around external windows and headlights, new overhead inline console with new rocker switches, engine intake manifolds made 2mm larger, different camshaft profiles, and notched trunk end panels (allowing for slightly more luggage space). Engine changes were reportedly good for an additional 20 PS (15 kW; 20 hp).

Other revisions were limited to create comforts, such as a locking glovebox lid, a reversed position of the cigarette lighter and windshield wiper switch, and single release handles for front and rear body sections. Other interior improvements included the addition of power windows and optional air conditioning, available for US$800. About 338 P400S Miura were produced between December 1968 and March 1971. One S #4407 was owned by Frank Sinatra. Miles Davis also had one, which he crashed in October 1972 under the influence of cocaine , breaking both ankles.

The last and most famous Miura, the P400SV or Miura SV featured different cam timing and altered carburetors. These gave the engine an additional 15 PS (11 kW; 15 hp), to 385 PS (283 kW; 380 hp). The last 96 SV engines included a limited slip differential which required a split sump. The gearbox now had its lubrication system separate from the engine, which allowed the use of the appropriate types of oil for the gearbox and the engine. This also alleviated concerns that metal shavings from the gearbox could travel into the engine with disastrous and expensive results.

The SV can be distinguished from its predecessors from its lack of "eyelashes" around the headlamps, wider rear fenders to accommodate the new 9-inch-wide (230 mm) rear wheels and Pirelli Cinturato tires, and different taillights. 150 SVs were produced.

There was a misprint in the SV owners manual indicating bigger intake valves in English size (but correct size in metric). The intake and exhaust valves in all 4 liter V12 Lamborghini remained the same throughout all models. This intake size misprint carried forward into Espada 400GT and Countach LP 400/LP 400S owners manuals as well.

In 1970, Lamborghini development driver Bob Wallace used chassis #5084 to create a test mule that would conform to the FIA's Appendix J racing regulations. The car was appropriately named the Miura Jota (the pronunciation of the letter 'J' in Spanish). Wallace made extensive modifications to the standard Miura chassis and engine. Weight reductions included replacing steel chassis components and body panels with the lightweight aluminium alloy Avional and replacing side windows with plastic, with the resulting car weighing approximately 800 pounds less than a production Miura. A front spoiler was added and the headlights were replaced with fixed, faired-in units. Wallace substituted two smaller, sill-mounted fuel tanks for the single larger original unit. The suspension was reworked and wider (9" in the front, 12" in the rear), lightweight wheels were fitted. The engine was modified to produce 418-440 bhp at 8800 rpm, with an increased compression ratio, altered cams, electronic ignition, dry-sump lubrication, and less restrictive exhaust system. This single example was eventually sold to a private buyer after extensive testing. In April 1971, the car crashed on the yet-unopened ring road around the city of Brescia, and burned to the ground.

A recreation of the Jota was later undertaken by Chris Lawrence of Wymondham Engineering for Lamborghini owner Piet Pulford from the United Kingdom.

Of the five examples of the Miura SV/J built by the factory while the Miura was still in production, two were built new (chassis #5090 and #5100) and three were converted from existing SVs (chassis #4934, #4860 & #4990). All of these still exist. Chassis #5100 is however the only SVJ to feature the dry sump lubrication system as per the mechanics of the original Jota #5084.

One of these cars, chassis #4934, was built for the Shah of Iran Mohammad Reza Pahlavi. The Shah stored this car under armed guard with another SV in Royal Palace in Tehran. After he fled the country during the Iranian Revolution, his cars were seized by the Iranian government. The SV/J was sold into Dubai in 1995. In 1997 this car was sold via a Brooks auction to Nicolas Cage, at US$490,000, becoming the model's highest ever price sold in an auction. Cage sold the car in 2002.

A sixth SV/J was built at the Lamborghini factory between 1983 and 1987 from an unused Miura S chassis. This was made for Jean Claude Mimran, one of the Mimran brothers, the then owner of Lamborghini.

Further Miuras were subsequently upgraded to SVJ specifications (trying to imitate the real factory SVJs) by various garages of Switzerland, USA and Japan.

Another one-off, the Miura Roadster (actually more of a targa-model, but without any removable roof) was built by Bertone as a show car. Based on a P400, it was first shown at the 1968 Brussels Auto Show. After having been exhibited at several auto salons the car was sold to the International Lead Zinc Research Organization (ILZRO) who turned it into a display-vehicle showcasing the possibilities of using zinc alloys in cars. The car was named the ZN75. A few other Miuras have had their tops removed, but this Bertone Miura Roadster was the only factory open-top Miura.

In 2006 the ZN75 was purchased by New York City real estate developer Adam Gordon. Gordon had Bobileff Motorcars in San Diego, California return the car to its original Bertone Roadster form. The restored car was first shown in August 2008 at the Pebble Beach Concours d'Elegance.

The one of a kind Lamborghini Miura Roadster was shown at the Amelia Island Concours d'Elegance in 2013.

This one-off example of the Miura was displayed at the 1981 Geneva Motor Show with other new Lamborghini models (Jalpa and LM002) shortly after new company CEO Patrick Mimran took over the factory. Finished in pearl white, the SVJ Spider was the formerly yellow Miura S presented at the 1971 Geneva Motor Show, reconstructed in 1980 by the Swiss Lamborghini Importer Lambomotor AG with SVJ parts provided by the factory - hence the official Bertone badge and Bertone lettering on the inner door side sills.

Equipped with wide wheels and a rear wing reflecting the marque's revival, it was considered as a prototype for a possible limited series of Miura Spider.

Subsequently bought by Swiss Lamborghini collector Jean Wicki, the car had its rear wing and chin spoiler removed and was painted silver, bringing the car's style closer to the Berlinetta SVJ. Lamborghini specialist Autodrome (France) purchased the car from Wicki and restored its bodywork and upholstery in partnership with Carrosserie Lecoq (Paris). Painted traditional Miura lime green, the car was eventually sold to a Parisian collector.

Other than private modifications, there are only two "open" Miuras, officially presented in International Motor shows: the Bertone Miura Roadster, exhibited on Bertone's own stand at Bruxelles in 1968, and this example, shown on the Lamborghini stand at the Geneva Motor show in 1981. 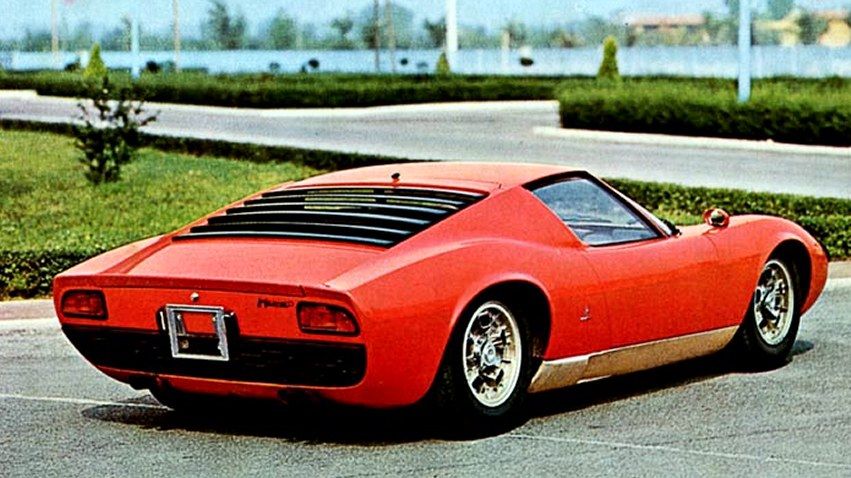