The Lamborghini Urraco was a sports car manufactured by Italian automaker Lamborghini in the 1970s. It was introduced at the Turin auto show in 1970 but wasn't available to buyers until 1973. It was named after a breed of bulls.

The car was a 2+2 coupé with body designed by Marcello Gandini, at the time working for Carrozzeria Bertone.Rather than being another supercar, like the Lamborghini Miura, the Urraco was more affordable, an alternative to the contemporary Ferrari Dino and Maserati Merak.

When production ended in 1979, 791 Urracos had been built. Twenty-one of these were labelled Urraco P111 (P250 Tipo 111) for the American market. In order to comply with American regulations, these cars had larger front bumpers and emissions controls, the latter resulting in less horsepower for the American version. The other Urraco versions were the Urraco P200, Urraco P250 and Urraco P300 with 2 litre, 2.5 litre, and 3 litre V-8 respectively.

Both the Lamborghini Silhouette, with its detachable roof panel, and its successor Lamborghini Jalpa, with a 3.5 litre V-8 engine, were based upon the Urraco.

On December 4, 2005, the Urraco was featured in a Top Gear segment against its main competitors, namely the Ferrari Dino 308 GT4 and Maserati Merak. Each presenter was given £10,000 to buy a "Supercar". James May purchased a Urraco. He initially arrived with the Lamborghini on the back of a flat bed truck, claiming that the car had several electrical issues. In the end, all three cars turned out to be unreliable and did not complete the challenge, although May and the Urraco were the closest of the three presenters to the final destination before the car ran out of petrol. At one point, James May defended the Urraco to a passerby by saying: "No, it's not a kit car, it's a Lamborghini." He then muttered under his breath: "Philistine."

A green Urraco P250S featured on the English TV show Wheeler Dealers, first broadcast in the UK on September 17, 2013. The car having been in storage for six years in Poland, was purchased, transported to the UK and went through a partial restoration. At the end of the program the Urraco was taken to Italy for its test drive and to participate in a parade to celebrate the 50th anniversary of Lamborghini. 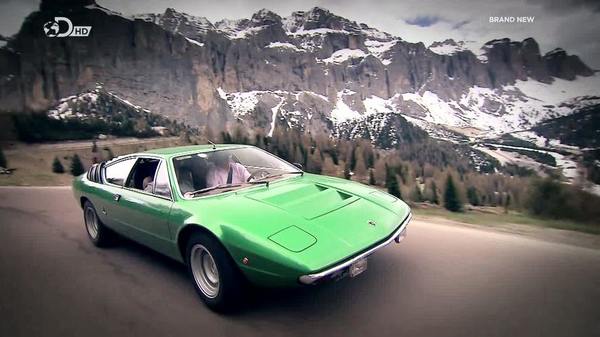