The Lamborghini Diablo is a high-performance mid-engined sports car that was built by Italian automaker Lamborghini between 1990 and 2001. It was the first Lamborghini capable of attaining a top speed in excess of 200 miles per hour (320 km/h). After the end of its production run in 2001, the Diablo was replaced by the Lamborghini Murciélago. Diablo is "devil" in Spanish, which is diavolo in Italian.

At a time when the company was financed by the Swiss-based Mimram brothers, Lamborghini began development of what was codenamed Project 132 in June 1985 as a replacement for the Countach model. The brief stated that its top speed had to be at least 315 km/h (196 mph).

The design of the car was contracted to Marcello Gandini, who had designed its two predecessors. When Chrysler bought the company in 1987, providing money to complete its development, its management was uncomfortable with Gandini’s designs and commissioned its design team in Detroit to execute a third extensive redesign, smoothing out the trademark sharp edges and corners of Gandini's original design, and leaving him famously unimpressed. In fact, Gandini was so disappointed with the "softened" shape that he would later realize his original design in the Cizeta-Moroder V16T. 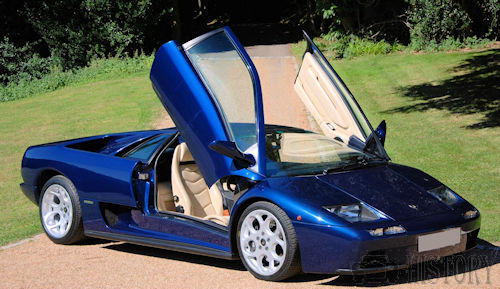 The Diablo came better equipped than the Countach had; standard features included fully adjustable seats and steering wheel, electric windows, an Alpine stereo system, and power steering from 1993 onwards. Anti-lock brakes were not initially available, although they would eventually be used. A few options were available, including a custom-molded driver's seat, remote CD changer and subwoofer, rear spoiler, factory fitted luggage set (priced at $2,600) and an exclusive Breguet clock for the dash (priced at $10,500).

The Diablo VT was introduced in 1993. Although the VT differed from the standard Diablo in a number of ways, by far the most notable change was the addition of all wheel drive, which made use of a viscous center differential (a remodified version of LM002's 4WD system). This provided the new nomenclature for the car (VT stands for viscous traction). The new drivetrain could direct up to 25% of the torque to the front wheels to aid traction during rear wheel slip, thus significantly improving the handling characteristics of the car.

Other improvements debuting on the VT included front air intakes below the driving lamps to improve brake cooling, larger intakes in the rear arches, a more ergonomic interior with a revised dashboard, electronically adjustable dampers, four-piston brake calipers, power steering, and minor engine refinements. Many of these improvements, save the four-wheel drive system, soon transferred to the base Diablo, making the cars visually nearly identical.

The Diablo SE30 was introduced in 1994 as a limited-production special model to commemorate the company's 30th anniversary. The car was designed largely as a street-legal race vehicle that was lighter and more powerful than the standard Diablo. The engine received a healthy boost to 530 PS (390 kW; 523 hp) by means of a tuned fuel system, freer-flowing exhaust, and magnesium intake manifolds. The car remained rear-wheel drive to save weight, and omitted the electrically adjustable shock absorbers of the VT model, but it was equipped with adjustable-stiffness anti-roll bars which could be controlled from the interior, on the fly.

The car's weight was lowered by replacing the power glass side windows with fixed plexiglas (with a small sliding vent window as on many race cars) and removing luxury features such as the air conditioning, stereo, and power steering. Carbon fiber seats with 4-point race harnesses and a fire suppression system added to the race nature of the vehicle.

On the outside, the SE30 differed from other Diablo models with a revised front fascia featuring straked brake cooling ducts and a deeper spoiler, while the rear cooling ducts were changed to a vertical body-colored design. The raging bull emblem was moved from the front of the luggage lid to the nose panel of the car between the front indicators. The engine lid had slats covering the narrow rear window, while a larger spoiler was installed as standard equipment. The single rear fog lamp and rear backup lamp, which had been on either side of the rear grille, were moved into the bumper; this change would be applied to all Diablo models across the lineup. Completing the exterior variations were special magnesium alloy wheels, SE30 badging, and a new metallic purple paint color (this could be changed upon request).

Only 150 SE30 models were built, and of these, about 15 were converted to "Jota" specification (although 28 Jota kits were produced). The "Jota" was a factory modification kit designed to convert the race-oriented SE30 into an actual circuit racer, albeit at the cost of street-legal operation. A revised engine lid with two ducts protruding above the roofline forced air into the intake system; a similar lid design would later be used on the Diablo SV model. With even more tuning of the Diablo's venerable V12 engine, the Jota kit produced nearly 603 PS (444 kW; 595 hp) and 639 N·m (471 lb·ft) of torque. An open exhaust system produced deafening engine roar, one of the main contributing factors to the Jota's track-only status, although some owners converted back to standard exhaust in order to enjoy their "super Diablo" on the road. The rear-view mirror from the interior was also removed because it was completely useless in conjunction with the revised engine lid, further adding to the race feeling of the car. 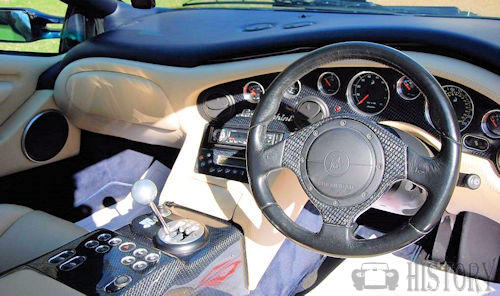 The Diablo SV was introduced in 1995 at the Geneva Auto Show, reviving the super veloce title first used on the Miura SV. The SV was based on the standard Diablo and thus lacked the four-wheel drive of the VT. A notable feature of the SV was an increase in horsepower to 517 PS (380 kW; 510 hp), which, paired with the two-wheel drive layout, could increase the likelihood of loss of traction during hard driving. Interestingly, despite its higher power output, the SV was priced as the entry-level model in the Diablo range, falling below the standard Diablo by a small margin. An adjustable rear spoiler was installed as standard equipment and could be color-matched to the car body or formed from carbon fiber. Other exterior changes included black tail lamp surrounds, repositioned rear fog and reverse lamps as on the SE30, dual front foglamps (rather than the quad style found on all previous models), an extra set of front brake cooling ducts, a ducted engine lid similar to that installed on the Diablo SE30 Jota, and optional "SV" decals for the sides of the car. The SV also featured larger diameter front brakes (340 mm (13.4 in)) and a corresponding increase in front wheel size to 18 inches.

In 1998, a limited 20-car run of Diablo SV's was produced exclusively for the United States market and called the Monterey Edition. The most notable feature of this edition was the use of the SE30/VT Roadster style of air intakes in front of the rear wheels, unlike the traditional (and persisting) SV style. Several of the cars were painted in unusual, vibrant colors. One Monterey Edition, featuring an upgraded engine and brakes, was driven by Mario Andretti during the Lamborghini-sponsored "Running of the Bulls" event in California. The Monterey Edition was foreseen to be a collectible, but due to the popularity of the fixed-lamp models to follow (see below), its value did not rise significantly over time.

The Diablo VT Roadster was introduced in December 1995 and featured an electrically operated carbon fiber targa top which was stored above the engine lid when not in use. Besides the roof, the roadster's body was altered from the fixed-top VT model in a number of ways. The front bumper was revised, replacing the quad rectangular driving lamps with two rectangular and two round units. The brake cooling ducts were moved inboard of the driving lamps and changed to a straked design, while the rear ducts featured the vertical painted design seen on the SE30.

The engine lid was changed substantially in order to vent properly when the roof panel was covering it. The roadster also featured revised 17 inch wheels. The air intakes on top/sides were made larger than the coupe Diablos. In 1998 the wheels have been updated to 18 inch, an the engine power raised to 530 HP by adding the variable valve timing system. Top speed specification was raised to 335 km/h (208 mph).

In 1999 the dashboard became a major optical update by Audi, and the pop-up headlights were replaced by fixed headlights, same as for the coupés. This resulted in a better aerodynamic shape and modern optics.

Lamborghini launched a facelifted Diablo in 1999, simplifying the model range by eliminating the "base" Diablo (since the SV model had become the new entry-level trim anyway) and applying universal revisions across the lineup. The most immediately noticeable exterior change was the replacement of the previous Diablo's pop-up headlamp units with fixed composite lenses, borrowed under license from their original application in the Nissan 300ZX Z32. All Diablos were also fitted with new 18 inch wheels.

The Diablo range also received an updated interior. Instead of the traditional flat dashboard with a separate upright instrument binnacle, as in many Italian sports cars of the era (and the previous Diablo), the new dash was an integrated wave-shaped design. A thin strip of black glass ran the length of the dash and contained various instrument indicator and warning lamps. This aesthetic design was inspired by Bang & Olufsen Hi-Fi products.

Under the engine lid, the tried-and-true V12 was bumped to 536 PS (394 kW; 529 hp) and 605 N·m (446 lb·ft) of torque for both the SV and VT models and now featured variable valve timing. For the first time ever in a Lamborghini, the Diablo was equipped with a Kelsey-Hayes ABS unit, complementing larger diameter brake rotors.