The Lamborghini Murcielago is a sports car produced by Italian automaker Lamborghini between 2001 and 2010. Successor to the Diablo and flagship of the automaker's lineup, the Murciélago was introduced as a coupé in 2001. The Murcielago was first available in North America for the 2002 model year. The automaker's first new design in eleven years, the car was also the brand's first new model under the ownership of German parent company Audi, which is owned by Volkswagen. It is styled by Peruvian-born Belgian Luc Donckerwolke, Lamborghini's head of design from 1998 to 2005.

A roadster version was introduced in 2004, followed by the updated LP 640 coupé and roadster and limited edition LP 650–4 Roadster. The final variation to wear the Murciélago nameplate was the LP 670–4 SuperVeloce, powered by the largest and final evolution of the Lamborghini V12 engine. Production of the Murciélago ended on November 5, 2010, with a total run of 4,099 cars.Its successor, the Aventador, was released at the 2011 Geneva Motor Show. 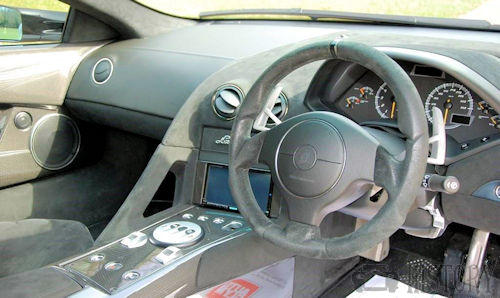 In a continuation of Lamborghini's tradition of naming its cars after stars from the world of bullfighting, the Murciélago is named for a fighting bull that survived 24 sword strokes in an 1879 fight against Rafael "El Lagartijo" Molina Sánchez, at the Coso de los califas bullring in Córdoba, Spain. Murciélago fought with such passion and spirit that the matador chose to spare its life, a rare honor. The bull, which came from Joaquin del Val di Navarra's farm, was later presented as a gift to Don Antonio Miura, a noted local breeder; thus began the famed Miura line of fighting bulls, and the name for one of Lamborghini's greatest designs.Name

This promotional story, however, largely contradicts the history of Miura ranch, whose bulls first fought in corrida in 1849, 30 years prior to the "story of Murciélago". It is also doubtful that, after 24 deep stab wounds and the associated stress and blood loss, the animal could survive, let alone reproduce.

Murciélago is the Spanish name for the bat. The word is pronounced [murθiˈelaɣo], with a voiceless dental fricative [θ] (as in English thing), in the Castilian Spanish spoken in most of Spain. However, the Italian automaker often uses the Southern Spanish and Latin American Spanish pronunciation, [murˈsjelaɣo], with an [s] sound. Many people in Italy pronounce it [murtʃieˈlaɡo], as if it were an Italian word.

The Murciélago is an all-wheel drive, mid-engined supersports car. With an angular design and an exceptionally low slung body, the highest point of the roof is just under 4 feet above the ground. One of the vehicle's most distinguishing features are its scissor doors. which lends to the extreme image. First-generation Murciélagos, produced between 2001 and 2006, were powered by a Lamborghini V12 that traces its roots back to the company's beginnings in the 1960s. The rear differential is integrated with the engine itself, with a viscous coupling center differential providing drive to the front wheels. Power is delivered through a 6-speed manual transmission. The Murciélago suspension uses an independent double-wishbone design, and bodywork features carbon fiber, steel and aluminum parts. The rear spoiler and the active air intakes integrated into the car's shoulders are electromechanically controlled, deploying automatically only at high speeds in an effort to maximize both aerodynamic and cooling efficiency.

The first generation cars were produced between 2001 and 2006, and known simply as Murciélago, sometimes Murciélago VT. Their V12 engines produced just under 580 PS (572 hp), and powered the car to 100 km/h (62 mph) in 3.8 seconds. Subsequent versions incorporated an alphanumeric designation to the name Murciélago, which indicated their engine configuration and output. However, the original cars are never referred to as "LP 580s". A first generation Murciélago Roadster was used in the 2005 movie Batman Begins.

The Murciélago Roadster was introduced in 2004. Primarily designed to be an open top car, it employed a manually attached soft roof as cover from adverse weather, but a warning on the windshield header advises the driver not to exceed 100 mph (160 km/h) with the top in place. The designer used the B-2 stealth bomber, the Wally 118 WallyPower yacht, and architect Santiago Calatrava's Ciutat de les Arts i les Ciències in Valencia, Spain as his inspiration for the roadster's revised rear pillars and engine cover.

In March 2006, Lamborghini unveiled a new version of its halo car at the Geneva Motor Show: the Murciélago LP 640. The new title incorporated the car's name, along with an alphanumeric designation which indicated the engine's orientation (Longitudinale Posteriore), along with the newly updated power output. With displacement now increased to 6.5 liters, the new car made 640 PS (471 kW; 631 hp) at 8000 rpm. The Murciélago's exterior received a minor facelift. Front and rear fascias were revised, and side air intakes were now asymmetrical with the left side feeding an oil cooler. A new single outlet exhaust system incorporated into the rear diffuser, modified suspension tuning, revised programming and upgraded clutch for the 6-speed "e-Gear" automated sequential transmission with launch control rounded out the performance modifications. Interior seating was also re-shaped to provide greater headroom, and a new stereo system formed part of the updated dashboard. Optional equipment is included Carbon fibre-reinforced Silicon Carbide (C/SiC) ceramic composite brakes, chrome paddle shifters and a glass engine cover. The 2008 car's estimated fuel economy for the 6-speed manual is 8 miles per U.S. gallon (29 L/100 km; 9.6 mpg-imp) city and 13 miles per U.S. gallon (18 L/100 km; 16 mpg-imp) freeway, making it the least efficient car in 2008 for city and highway driving, according to the EPA. A second generation Murciélago LP 640 was used in the 2008 movie The Dark Knight.

At the 2006 Los Angeles Auto Show, Lamborghini announced that the roadster version of the Murciélago will also be updated to LP 640 status.

At the 2009 Geneva Motor Show, Lamborghini unveiled the ultimate version of the Murciélago, the LP 670–4 SuperVeloce.The SV moniker had previously appeared on the Diablo SV, and Miura. SV variants are more extreme and track-oriented, and are released at the end of each model's production run.

According to Maurizio Reggiani, head of Lamborghini R&D, the LP 670–4 SV's steering was tuned for high-speed sensitivity. The original production plan of the ultimate Murciélago was limited to 350 cars, and cost $400,000 US (before options) £270,038 in 2009. However, only 186 LP 670-4s were produced before the factory had to make room for the new Aventador production line. Numbered cars 1–350 do not represent the order in which cars were manufactured.

In 2004, Lamborghini celebrated its 40th anniversary by releasing a limited run of 50 40th-Anniversary Edition Murciélagos. Enhancements over the standard vehicle included a limited-edition blue body color that was labeled "Jade-Green", carbon-fiber exterior detailing, upgraded wheels, a revamped exhaust system, and a numbered plaque on the inside of the rear window. The interior also featured unique leather trim.

The Murciélago LP 640 Versace is a special limited edition of the LP 640 that was unveiled at the 2006 Paris Motor Show. Available in either white or black, only 20 were produced as both coupés and roadsters. Although the standard V12 engine was used, stylists from the Versace fashion house, and Lamborghini's Ad Personam program, collaborated to design custom interiors finished in two-toned Versace leather. Gianni Versace logo plaque. Each unit came with matching Versace luggage, along with driving shoes and gloves. A matching watch from Versace's Precious Items department was also made available to customers.

A Lamborghini Murciélago Roadster in Batman Begins ,Movie from 2005