The Lamborghini 350 GT was the first production vehicle produced by Lamborghini. Production started in May 1964,after its well-received debutat the March 1964 Geneva auto show. Its success ensured the company's survival, establishing it as a viable competitor with sports car maker Ferrari.

After the testing of his prototype Lamborghini engine in May 1963, Giotto Bizzarrini left the company, and the following month Ferruccio Lamborghini assigned Gian Paolo Dallara—with the assistance of Paolo Stanzani and Bob Wallace—the task of developing a production version of the grand tourer.

Dallara and Stanzani quickly realized that the Lamborghini 350GTV was not properly designed for mass production, so they proceeded along parallel lines:

The original Bizzarrini-designed 3.5 liter V12 was essentially a race motor, potentially developing 400 hp at 11,000rpm. In order to fit his grand touring car with a smoother, more pleasant, longer-lasting engine, that was "good for 40,000 hard miles between services" Ferruccio had Dallara and Wallace detune a version of this prototype "GTV" motor for street use. This included:

While this 350 GT design work continued, the GTV prototype was rushed to completion for the upcoming October 26 press meetingand the subsequent inauguration of the Turin Auto Show on the 30th. The GTV was shown at the Turin Auto Show with the original Bizzarrini "racing" V-12 engine—with its downdraft webers, rear distributors, etc.—displayed alongside as it was not "adapted to the chassis." The car was a "non-runner" with the suspension arms simply tack-welded in placeand the engine not installed. Lukewarm reaction to the car caused Ferruccio to postpone plans for immediate productionand move on to the new 350 GT design.

In March 1964, only 5 months after the debut of the GTV in Turin, the "redesigned GTV"—now called the 350 GT—was debuted at the Geneva Auto Show. It was greeted with sufficient enthusiasm that Ferruccio decided to proceed with production at Sant'Agata in May 1964. 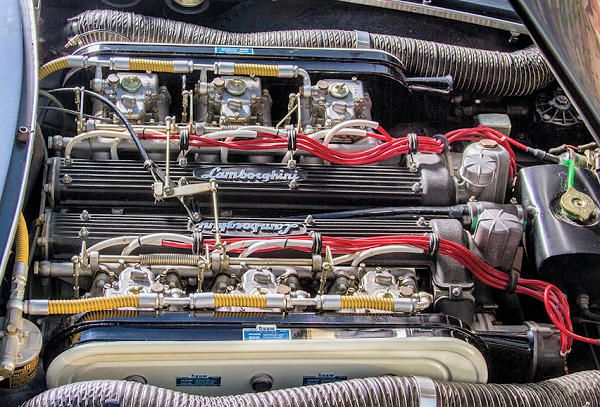 The manufacture of the bodies was entrusted to Touring of Milan, who used their patented Superleggera method of construction to fix aluminium alloy panels directly to a tubular structure. The first 350 GT frame was fabricated by Neri and Bonacini, who continued to act as Lamborghini's chassis supplier until production of the 350 GT was underway, when the job was turned over to Marchesi. Chassis and bodies were mated at Touring, which then delivered the complete assemblies—with even the bumpers in place—to the Lamborghini factory. The cars could be ordered in these colors.

The 350 GT had an all-aluminium alloy V12 engine mated to a five-speed ZF manual transmission. It had an aluminium body (some had steel bodies), a Salisbury differential, four-wheel independent suspension, and vacuum servo-assisted Girling disc brakes all round.

The 350 GT shared a number of features with the 350 GTV prototype, including a four-wheel independent suspension, quad-cam V12, and an aluminium body. A number of revisions and refinements were made due to the suggestions of the Neri & Bonacini racing development shop, and test driver Bob Wallace. Fixed headlights replaced the prototype's pop-up variety, and twin-barrel side-draught Weber 40 DCOE 2 carburettors reduced the height of the engine, thereby negating the clearance problems of the GTV prototype, and giving the car the exceptionally low hood line Ferruccio desired.

As was the case with the motor, Bizzarrini's GTV "racing" chassis design was the basis of Dallara’s 350 GT "street" chassis. Using far heavier materials, Dallara created an extremely strong chassis from square-section tubing which provided easy entry and exit through the doors, aided in the quietness of the car, and provided a solid platform on which to mount the body, much like the Aston Martin DB4.

The suspension was fully independent, with unequal-length wishbones and concentric coil-spring-damper units. The rear suspension wishbones were offset towards the spring mountings to resist driving and braking torque, which provided superior handling.

Quality control of the early 3.5 liter engines was very high. Each one underwent tests for 24 hours on a Schenk Walge dynamometer, being run for the first 12 hours under electric power, and then with petrol at increasing speeds. A detailed analysis was made of its behavior before installation in the car for at least 500 kilometres of mixed-test running by Wallace.