The Lagonda Rapier was a small car Manufactured by Rapier Cars Ltd, Hammersmith, London W6, England from 1934 to 1935.

Wilburn Gunn, who began his career with the production of motorcycles, founded the Lagonda car company in the late 1800s. Up to 1933 the company made only heavy, solid tourers of 3 litres and 4.5 litres. Then it produced a new small sports car, the Rapier 9.5 HP. The 9.5 HP designation indicated the taxable horsepower. Two camshafts in the cylinder head controlled the valves. The 1086 cc engine, fitted with two SCI-type carburettors, was rated at 33kW
(45hp) but could be tuned up to 51.5kW (70hp). This super-tuned version with the production of the engine was sub-contracted to Coventry Climax was entered for races. The drive was transmitted via a four- speed gearbox fitted with a pre-selector.

The chassis designed by Charles King had both rigid axles suspended on semi-elliptic springs. The wire-spoke wheels were fitted with hydraulic brakes. With a standard engine the car had a top speed of 120km/h (75mph). In the convertible version the automobile weighed 900kg (19801b). The roadster pictured here belonged to the
few models which had coachwork by Whittingam and Mitchell. But the Rapier did not bring the Lagonda company the expected financial reward, and production was curtailed in 1937. The balance Of orders was taken over by Rapier Cars Ltd., which was established for that purpose, with the former Lagonda designer, W. H. Oates, at its head. The new company fitted the production cars with compressors, and thus enabled owners to enter for races without expensive modifications. This version of Rapier had a top speed of 144km/h (90mph). Altogether 300 Rapiers were built. The Lagonda company realized too late that it was possible to win commercial success with a small car.

The firm was purchased by the Aston Martin-David Brown company, famous for its sports cars. A few more were subsequently produced by the independent Rapier Car Company. 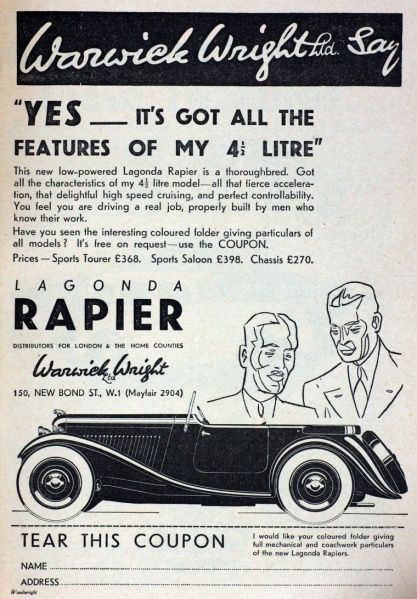