In 1935, Lagonda encountered another of the financial crises which had afflicted them at Staines over the years. As a result, a Receiver was appointed, and control eventually passed to Alan Good, Dick Watney and W.O. Bentley. Thus revived, Lagonda became more stable, though further commercial upheavals took place during the war. Bentley's work on an entirely new car began during the war, and the Postwar Lagonda took recognisable shape by 1945. Not only did this have an interesting cruciform-style chassis frame with all-independent suspension, but it had a brand-new 2.6-litre six-cylinder twin-cam engine designed under W.O.'s personal supervision. In every way, this car was a departure from Lagonda practice of the late 1930s, and was going to need a great deal of capital for tooling. One feature of the prototype, incidentally, was the electro-magnetic Cotal gearbox. Financially, it proved impossible to put the new Lagonda into production (Briggs were originally to have supplied bodies and frames), and Lagonda was sold to David Brown in 1947.

After a great deal more development, and the substitution of a David Brown gearbox, the finalised Lagonda was put on sale in 1948/1949, after an appearance at the first postwar Earls Court Motor Show. Assembly was at the Aston Martin works at Feltham (this firm also having been taken over by David Brown), though engines and transmissions were made at the David Brown factory near Leeds, and the four-door saloon bodies were built at Feltham
By the early 1950s a drophead coupe derivative had been added to the range, and at the 1952 Motor Show the cars became Mark IIS due to a number of mechanical refinements and the use of widened bodies. However, by this time the original Lagonda styling, conceived in 1944/1945 to modified pre-war themes, was beginning to look somewhat dated, and it was also time to consider a performance boost.

Accordingly, production of 2.6-litre cars ran out after 550 examples had been built.

Lagonda 2.6 Litre in The Spanish Prisoner, Movie from 1997 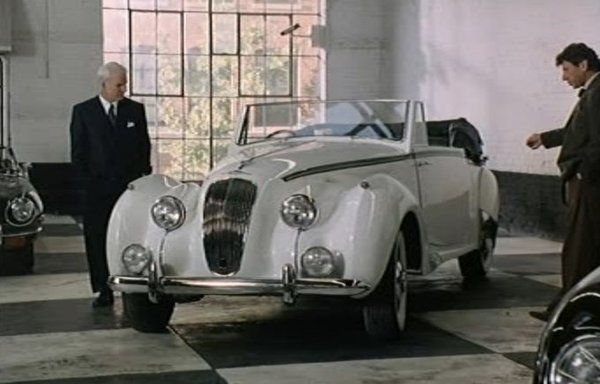