The Lada 110 or VAZ-2110 is a compact car built by Russian automaker AvtoVAZ since 1995. It also spawned two close derivatives: the Lada 111 estate and the Lada 112 hatchback. It was one of the first generation of Lada vehicles produced after the fall of communism, but before foreign investment and partnerships influenced the direction of AvtoVAZ.

The development stages of the 110 began in the early 1990s, with a prototype coupé called the Katran 1.6i produced that was first demonstrated at the AvtoVAZ Togliatti factory in 1991. A lack of financial investment stalled the project, but the design of the Katran prototype was revisited in around 1995, when work on the 110 series began, and clear similarities between the Katran's shape and the 110's overall design can be seen.

The 110 enjoyed moderate sales success in the domestic Russian market; although early models were hindered by a number of recurring reliability problems.

There were three trim level: Standard, Normal, and Luxe.

The model has been a favorite target for tuning, as artisanal and professional, especially the version with the five-door hatchback body (Lada-112). Various firms from Tolyatti also designed and offered body kits: APAL company produces components for Lada BIS 110 and 111, as do Tornado, Katran, Grossmeyster; AKS company of Kurage, Autostyle company of Tomcat, Motorica company of Lada 110M (included in the official catalog of AvtoVAZ and was considered a restyled version), Pit-Stop company of Grand Rally and Rally Sport, Arsenal-Auto company of Sprint. The Super-Avto has developed a version with a motor of 1.8 liters of its own design and an elongated version of the sedan VAZ-21108 Premier included in the official catalogs of AvtoVAZ. The Motorica company has produced the sporting VAZ-21106 version with a 135 PS (99 kW) Opel engine, altered rear wings, and extended wheel arches. Enterprise, together with AvtoVAZ, built a Lada Consul in 1999-2006 years and also produced the four-wheel drive "Tarzan-2" version on the basis of the station wagon (Lada 111) with a raised body placed on a separate frame .

Since 2007, the 110 has been discontinued by Lada, however Bogdan continues to produce this car as the Bogdan 2110 for the Ukrainian market.

The Lada 110 was entered in the 2008 World Touring Car Championship season by the Russian Bears Motorsport team, with Viktor Shapovalov (#28) and Jaap van Lagen (#29) as the drivers.

Team LADA Sport commenced the 2009 World Touring Car Championship season with a trio of 110s for Jaap Van Lagen, Kirill Ladygin and Viktor Shapovalov. The team replaced the 110s with the Prioras during the course of the season. 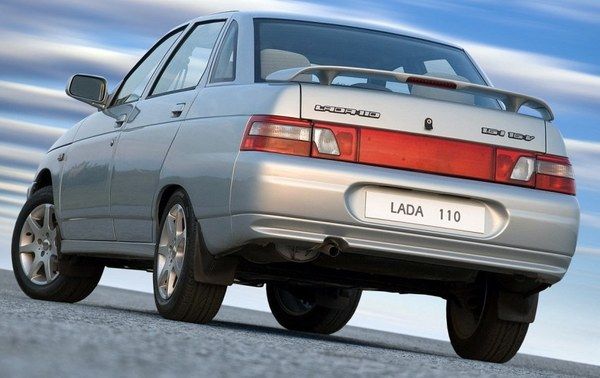