The fourth generation of the Sportage was presented in 2015 .In China, the fourth generation of the Sportage is sold as the Kia KX5 . The third generation is there still a Sportage R marketed.The vehicle is closely related to the third generation Hyundai Tucson  The fourth installment of the Kia Sportage is presented at the 2015 Frankfurt Motor Show on September 15, then launched in january 2016 at the same time as the new Hyundai Tucson with which it shares a good part of the mechanics and is inspired by the design of the Kia KX3 . Two petrol and three diesel engines were available for the market launch.5 out of 5 Stars in the Euro NCAP - Crash Test (2015)

In 2018 , the Sportage IV was restyled for the 2019 , the additional lights  that surrounds the rear on the tailgate adapts to their color. It adopts a 48 V light hybridization on a new 2.0 Ecodynamics + diesel engine, which reduces fuel consumption and CO 2 emissions..

KIA offers on this new model a 2.0l CRDI 190 hp which makes its appearance at the top of the range. The transmission also remains unchanged with a 6-speed manual and automatic gearbox available.

In essence, the Sportage is equipped with the new generation of engines from the South Korean brand, which could offer a 1.2 turbo of 132 hp at the entry level, a 2.0l, with powers between 170 and 200 hp, which should constitute the heart of the offer. Finally, for power fans, a 2.4l turbo 260 horsepower should come to top the range. 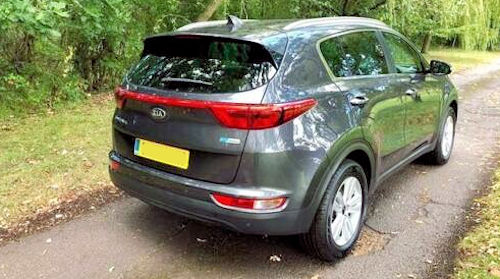 Kia Sportage 4th generation from 2015 on