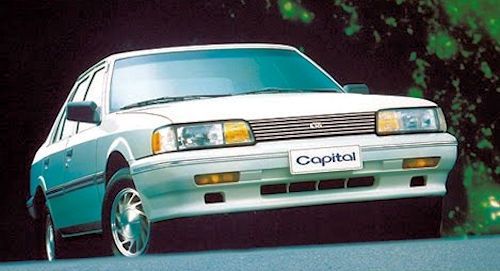 After a change in legislation meaning that cars were now taxed based on displacement, with a large threshold at 1,500 cc, the Capital was available with a Twin Cam, 16-valve B5 engine in May 1990. This surprising development had 115 PS (85 kW) on tap at 6,500 rpm. Top speed was 170 km/h (106 mph), the same as for the fuel-injected 1.5, but 0–100 km/h acceleration time dropped from 13.5 to 10.0 seconds. After the 1990 introductions of stronger competitors such as the Daewoo Espero and Hyundai Elantra, the Capital received a facelift in November 1991. The facelift was not very deep, the most obvious difference being the relocation of the rear license plate to the bumper rather than between the taillights. The facelift version offered the 1.5 engine as well as a downgraded version of the 1.8, now to carburetted specifications and producing a mere 82 PS (60 kW) at 5,000 rpm. This was mainly intended for taxi usage. There was also an export version with the carburetted two-valve 1.5 for Kia's very few export markets, with 73 PS (54 kW).

In June 1994 the Capital received another facelift, featuring more rounded headlights and a new grille. This was called the "New Capital" in the marketing, although the badging on the car remained plain "Capital". The New Capital was only sold with the 16-valve B5 engine, in GS or higher LS equipment levels. Production of the Capital finally ended in December 1996, overlapping a few years with the Sephia that would eventually replace it.