The first generation Forte shares the same platform as the Hyundai Elantra (HD), though employing a torsion-beam rear suspension in place of the Elantra's multilink design.

Kia has stated that the Forte was specifically designed to target younger buyers attracted to sharper auto designs.

The two-door coupe "Forte Koup" was originally unveiled as a concept car in the form of the "Kia Koup" on March 20, 2008 at the New York International Auto Show. The concept sported a twin scroll turbocharged version of the 2.0-liter Theta II inline-four engine. The production Forte Koup is badged as the "Kia Cerato Koup" in Australasia and South Africa, is called the "Kia Shuma" in China, and "Kia Koup" in Chile.

In 2009, Kia unveiled the mild hybrid Forte at the Seoul Motor Show for the South Korean market. Taking its underpinnings from the Hyundai Elantra LPI Hybrid, the car is powered by liquefied petroleum gas (LPG). It is powered with a 85-kilowatt (114 hp) 1.6-litre LPG engine coupled with a 15-kilowatt (20 hp) electric motor and a lithium-polymer battery pack, making it the first production car to use lithium-polymer batteries.

For the Chinese market, Kia has offered the "Forte Furuidi" since 2009. The Furuidi was unveiled at the Nanjing International Expo Centre, and is available with the 1.6- Gamma and 2.0-liter Theta engines. "Furuidi" means luck and auspiciousness in the Chinese language—and has a pronunciation similar to its English name "Forte".

In Malaysia, the Forte is assembled by the joint-venture company Naza-Kia and is called the "Naza Forte". It is offered with the 1.6-liter Gamma and 2.0-liter Theta II engine variants, with six-speed automatic transmissions.

In Russia and Ukraine, the Cerato (Forte) is available as the Cee'd's notchback counterpart, with the coupe and saloon available together. The Forte is not available in other European countries, due to the relatively low popularity of small family sedans there. Despite the LPI Hybrid being launched at the Frankfurt Motor Show, the Forte is still not offered in European countries outside Russia and Ukraine.

The LX is the base model. It comes standard with electronic stability control (ESC), and seat- and side-mounted airbags. The standard stereo includes four speakers, AM/FM radio, CD/MP3 player, and Sirius XM Radio. An iPod-compatible USB input jack and an auxiliary port for an external music device and steering wheel mounted audio controls are also integrated with the sound system. Bluetooth handsfree technology is also standard. The second-tier EX adds air conditioning, power windows and door locks, cruise control, a six-speaker radio, a key fob with keyless entry, and turn signal indicators on the side mirrors. The SX has the 2.4-liter engine with a six-speed manual or optional five-speed automatic transmission. The SX also adds alloy wheels, a leather-wrapped steering wheel and shift lever, a tilting and telescoping steering column, sport-cloth seats, and a metallic finish to the interior. Later production models have soft-touch panels on the armrest and door, as well as on the dashboard. For 2011, the EX and SX sedans are automatic-only, while the base sedan and all models of the Koup and Forte5 continue to offer the choice of manual or automatic.

For the Forte Koup, an optional leather package is available on both EX and SX trims. When combined with the EX trim, leather is utilized for the upholstery, steering wheel and shift lever; heated front seats and a sunroof are also included with the package. When paired with the SX trim, it includes only heated leather seats and the sunroof, as a leather-wrapped steering wheel and shift lever are already fitted as standard.

The Forte sold in Canada has similar specifications and equipment as the US-market model. Some differences include the addition of power windows, door locks and power heated exterior mirrors on the base LX trim, a telescopic steering wheel on the EX trim, and a standard sunroof and automatic climate control system on the SX trim. The EX and SX also have a chrome-trimmed rear garnish and door handles. In contrast to the transmissions offered in the United States, the automatic transmission on offer in Canada is a 6-speed. 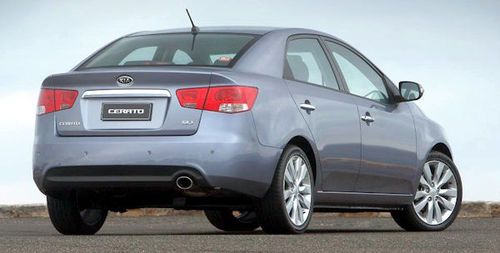