Automotive manufacturer of Great Britain from 1908 to 1979. 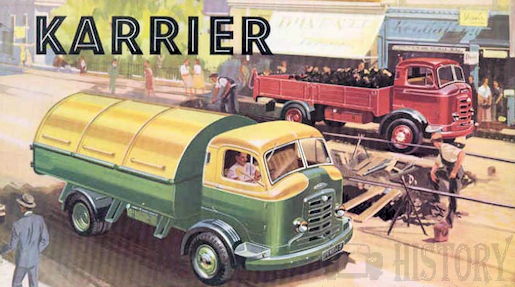 Notes: purchased by Commer (Rootes Group) in 1934 and later by Chrysler.

Karrier produced buses as well as their other municipal vehicles and in latter years, especially during the Second World War, Trolleybuses, notably their Karrier 'W' model.

In 1934 Karrier became part of the Rootes Group where it retained its brand identity though the business was operated as part of Rootes' Commer commercial vehicle operation. The Karrier name began to disappear from products when Chrysler bought Rootes in 1967. It was finally dropped in the early 1970s.

Herbert Fitzroy Clayton (1857–1935), a prosperous chemicals manufacturer or drysalter and dyer, incorporated in December 1904 a company, Clayton & Co Huddersfield Limited, to own the engineering business he had carried on independently since 1899 when he had left his Dixon Clayton & Co partnership. In 1908, joined by his second son, Reginald Fitzroy Clayton MIAE (1885–1964), Clayton & Co began designing and making Karrier petrol driven motor vehicles and charabancs which became their main business. In 1920, keeping Clayton & Co Penistone separate and retaining control of this new company, Clayton & Co Huddersfield was sold to a newly incorporated public listed company which they named Karrier Motors Limited. At this time the products had been:

A plan to amalgamate T.S. Motors Limited (Tilling-Stevens) with Karrier agreed in August 1932 was dropped a month later without explanation. The following August 1933 Karrier tardily announced that under difficult trading conditions they had made a substantial loss during that 1932 calendar year. At the beginning of June 1934 Karrier was put into receivership though it was also announced that business would continue while "negotiations" were completed. It was bought by Rootes.

Rootes Securities, through its partly-owned subsidiaries, acquired Karrier in August 1934 when employee numbers had fallen to 700.Rootes closed the Huddersfield operation and moved production to Commer's Luton works but trolley-bus manufacture was moved to Moorfield Works, Wolverhampton where the same Karrier designs were to be built alongside Sunbeam Commercial Vehicles' trolley-buses. Tilling Stevens would eventually join the Rootes Group in 1950.

Dodge Brothers, then a leading builder of light trucks in USA, in 1922 began to bring knocked-down kits for assembly in Park Royal, London. Dodge Brothers became a Chrysler subsidiary in 1928 and truck production moved to Chrysler's car plant at Kew. Dodges built there were known as "Dodge Kews" and the (partly Canadian sourced) American model cars built beside them, "Chrysler Kews". During the Second World War this Chrysler factory was part of London Aircraft Production Group and built Handley Page Halifax aircraft assemblies. Dodge (some vehicles badged Fargo or De Soto) truck production was merged with Commer and Karrier at Dunstable in 1965. The Public Record Office is now on the site of the Chrysler plant.

By 1970, the Rootes Group had been taken over (in stages) by Chrysler Europe, with support from the British Governmentwhich was desperate to support the ailing British motor industry. The Dodge brand (also used by Chrysler in the USA) began to take precedence on all commercial models. The last vestige of Karrier was probably in the Dodge 50 Series, which began life badged as a (Chrysler) Dodge but with a Karrier Motor Company VIN (vehicle identification number) plate.

Chrysler eventually withdrew from UK operations, selling the business to Peugeot. The new owner had little interest in heavy trucks and the factory was then run in conjunction with Renault Véhicules Industriels, (then part of Renault though now Volvo). The combined company used the name Karrier Motors Ltd, although the vehicles took on Renault badges and were sold through Renault Trucks dealers. Renault had been keen to secure a UK manufacturing operation for engines for its own models, and did relatively little to market or develop the British designs, favouring its existing French range such as the Renault Master. The end of the Karrier name could not be far off; eventually, Renault severed ties with Peugeot and introduced a Renault Truck Ind. or Renault Vehicles Ind. VIN plate (RVI).

The Karrier trademark is still in the possession of Peugeot, and it is not uncommon for vehicle marques to be reinstated.

In 1929, Karrier started production of the "Colt" three-wheeler as a dustcart chassis for Huddersfield Corporation. In 1930, this was developed into the "Cob" tractor to haul road trailers for the London, Midland and Scottish Railway.

In the mid-1930s, the "Cob" range was supplemented by the four-wheel "Bantam".

Described by newspapers, quoting Karrier, in 1930 as a "mechanical horse" the small "Cob" tractor was designed by J Shearman, road motor engineer for London, Midland and Scottish Railway. Its small wheels let it turn in confined spaces and manoeuvre more easily in traffic. The front wheels are lifted from the ground when the tractor is attached and it was then classed as an articulated vehicle. It was capable of pulling a three-ton load at 18 mph and capable of restarting on a gradient of one in eight. Production tractors powered by Jowett engines were displayed on the Karrier stand at Olympia's Motor Transport Show. A Karrier "Cob" Major, a 4-ton three-wheeled tractor, was also displayed

Karrier's Ro-Railer was a hybrid single decker bus, capable of running on both road and rail, intended for towns and villages distant from a railway. Also designed by J Shearman, road motor engineer to London, Midland and Scottish Railway it was tested by the chairman and board of directors of LM & S in January 1931 by travelling between Redbourn and Hemel Hempstead.

Though it was not a success, Karrier's road railbus looked like a bus and could be changed from road to rail in 2½ to 5 minutes. With a six-cylinder engine and a body by Craven it ran at up to 50 mph. Said to be very rough-riding it ran for 1930/31 on the Stratford-on-Avon and Midland joint line. Finally it became a vehicle used to transport track ballast on the West Highland Line.

In 1925, Karrier became the first British manufacturer to produce a three-axle passenger vehicle, aided by the availability of larger pneumatic tyres, and in 1926, entered into an agreement with Clough, Smith & Co. Ltd. to produce the 'Karrier-Clough' trolley-omnibus which Clough would market. This arrangement continued until 1933, when Karrier began marketing the trolleybuses themselves. Despite receiving multiple orders in 1933–4, Karrier went into receivership, leading to the takeover by Humber in 1934, thus becoming part of the Rootes Group.Trolleybus manufacture was moved to Rootes' Sunbeam subsidiary's factory at Wolverhampton, where it continued up until World War II. During the periods in wartime, when production was allowed, only one model was produced, the W4, which could be badged either as Sunbeam or Karrier.Post-war, production continued briefly before the trolleybus portion of the company was sold to Brockhouse in 1946.

In the late 1950s and 1960s some Karrier vehicles were fitted with the Rootes TS3 two-stroke opposed piston diesel engine. Other engines used in this period include Humber Hawk 4-cylinder petrol engines (L-Head and OHC), Humber Super Snipe 6-cylinder (L-Head and OHV) and Perkins Diesels.

At Luton, the only designs carried over from the previous era were the three wheeler and the six-wheel trolleybus chassis.

Under Rootes ownership, Karrier trucks were generally smaller size than their sister, Commerbrand, with "Bantam" models using 13-inch and "Gamecock" models using 16-inch wheels, to give lower loading height. They were designed for local authorities and their varied applications, including highway maintenance tippers, refuse collection vehicles and street lighting maintenance tower wagons. Karrier trucks and chassis were also built for and supplied to airport operators and airlines for baggage handling trucks, water bowsers and toilet servicing. 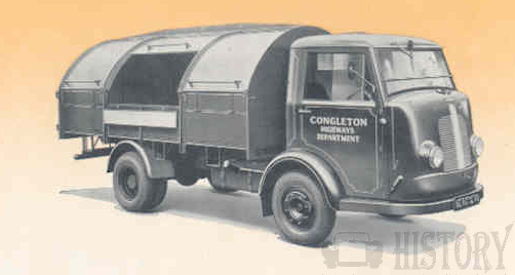