The Jensen Interceptor is a sporting GT-class car that was hand-built at the Kelvin Way Factory, West Bromwich near Birmingham in the United Kingdom by Jensen Motors between 1966 and 1976. The Interceptor name had been used previously by Jensen for the Jensen Interceptor made between 1950 and 1957 at the Carters Green factory. Jensen had extensively used glass-reinforced plastic for the fabrication of body panels in the preceding two decades, but the new Interceptor saw a return to a steel body-shell instead of glass-reinforced plastic and by having the body designed by an outside firm, Carrozzeria Touring of Italy, rather than the in-house staff. The early bodies were Italian-built, by Vignale, before production by Jensen themselves began – with subtle body modifications – in West Bromwich.

Jensen used Chrysler V8 engines for the Interceptor, starting with the 6276 cc (383 c.i.) with optional manual (Mark I, only 22 built) or TorqueFlite automatic transmissions driving the rear wheels through a limited slip differential in a conventional Salisbury rear axle. In 1970 the 383 c.i. produced 335 hp SAE gross, or 270 hp SAE net. Since this engine was detuned by Chrysler for use with regular gasoline and only produced 250 hp SAE net in 1971, Jensen chose to use the 440 c.i. Chrysler engine for 1971.

For 1971, two 440 c.i. engines were offered. One had a 4-barrel carburetor and it produced 305 hp SAE net. The other, which had three 2-barrel carburetors and produced 330 hp SAE net, was only available in 1971. Only 232 cars were built with the 440 Six Pak, and had the distinction of being the most powerful car ever to have been made by Jensen.

The Interceptor may have taken some styling cues from the Brasinca Uirapuru, with a distinctive large, curving wrap-around rear window that doubled as a tailgate. The original specification included electric windows, reclining front seats, a wood rimmed steering wheel, radio with twin speakers, reversing lights and an electric clock. Power steering was included as standard from September 1968.

The Mark II was announced in October 1969, with slightly revised styling around the headlamps, front grill and front bumper. It also introduced ventilated disc brakes in lieu of the earlier un-ventilated discs and a completely restyled fascia / dashboard. The Mark III of 1971 revised the front grill, headlamp finishers and bumper treatment again. It also had revised seats, optional fully cast alloy wheels other minor improvements. The 6.3 litre 383ci engine was also superseded by the 7.2 litre 440ci in 1971. The Mark III was divided to G-, H-, J-series depending on the production year. By 1975 the company fell on hard times due to the then world-wide recession, and the receiving company (called in to manage the wind-down and liquidation of Jensen Motors) allowed production to be wrapped up using the available cache of parts. Production of the Interceptor ended in 1976.

A group of investors stepped in and re-launched production of the Interceptor, which was briefly re-introduced in the late 1980s as the Series 4 (S4). The car came back as a low-volume hand built and bespoke affair, marketed in a similar way to Bristol, with a price (70,000 GBP and up) to match. Though the body remained essentially the same as the last of the main production run of series 3; the engine was a much smaller Chrysler supplied 360 cubic inch (5.9 litre) which used more modern controls to reduce emissions comparatively and still produce about 230 hp. In addition, the interior was slightly re-designed with the addition of modern "sports" front seats as opposed to the armchair style of the earlier models, as well as a revised and modern dashboard and electronics.

The then owner sold up in 1990 to an engineering company believed to be in a stronger position to manufacture the car which lasted until 1993 with approximately 36 cars built, and while work commenced on development of a series 5 (S5) Interceptor, once again receivers were called in and the company was liquidated.

A convertible with powered soft top was introduced in 1974 mainly intended for the American market but also sold in Europe. 267 convertibles were made.

Rarer still is the Coupé version with just 60 made, derived from the convertible and therefore without the distinctive rear window of the regular car that was introduced in 1975, a year before the company's demise.

Jensen were one of the first manufacturers to equip a production car with four-wheel drive, in the 1967 Jensen FF (Ferguson Formula). At the time it was hailed as a remarkable development, coming also with Dunlop Maxaret mechanical anti-lock brakes and traction control. The car is five inches (127 mm) longer than the Interceptor, and although looking virtually the same the extra length is identified by an additional side vent ahead of the doors on the front flanks, an extension to and additional swage line in the leading edge of the front wing (fender). Press articles from the time quote "drag-strip" performance when describing the car. In total 320 FFs were produced; 195 Mark I, 110 Mark II and 15 Mark III.

In May 2010, Jensen International Automotive was set up, with the financial backing and know-how of Carphone Warehouse founder and chairman Charles Dunstone who joined its board of directors. A small number of Jensen Interceptor Ss, which had started production under a previous company, are being completed by Jensen International Automotive (JIA), in parallel with JIA's own production of the new Jensen Interceptor R; deliveries of the latter have started (beginning of 2011) at the Oxfordshire-based manufacturer and restorer. Tony Banham is JIA's Managing Director. 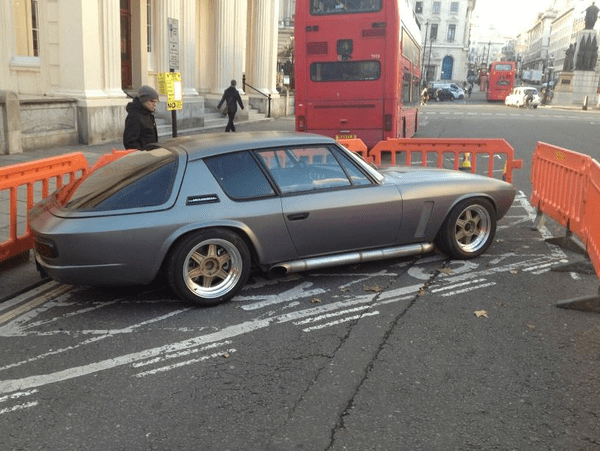 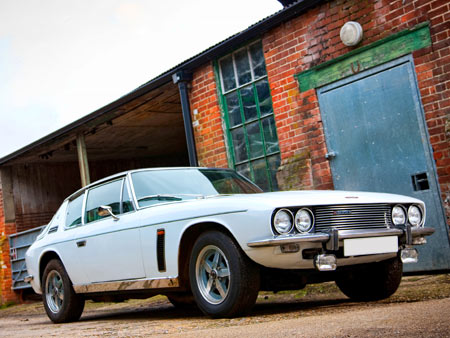