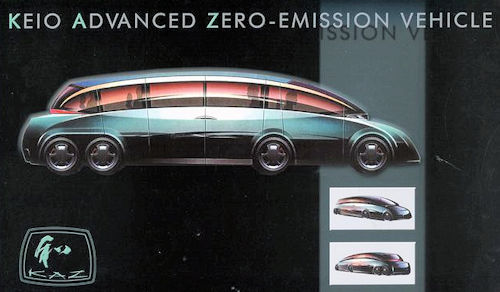 Keio University  is a research university located in Minato, Tokyo, Japan.They have built a number of electric vehicle prototypes or concept car with a more unusual eight-wheeled electric cars

The Kaz,is able to travel over 180 miles on a single charge, which takes one hour.seats eight  with 590HP, and is powered by rows of 3.75V lithium-ion batteries stored along its underside. Still in its prototype stage, the car is 6.7yds long, 5.5ft high, and over 6ft wide. It weighs 6,570lbs and and is able to reach maximum speeds over 186mph.

The Eliica ( E lectric Li thium- I on battery Ca r ) is a battery-powered electric car , which by a team of Keio University in Tokyo , Japan has been developed. Leading the way here was Hiroshi Shimizu, who researches in the field of electric vehicle drives since the 1970s. Shimizu is convinced that the common prejudices against electric vehicles can only be erased from the public perception, if extremely powerful vehicles exceed or at least achieve the performance of the fastest combustion engine vehicles. Therefore, the Eliica was a top speed of 400 km / h development goal - have been achieved so far in tests in Nardò 370 km / h.

The Eliica is 5.1 m long and has a mass of 2400 kg, the body has a slight similarity to a Citroën DS on. The front doors are conventional, but the rear doors are hinged doors. The chassis is skateboard-engineered and includes batteries and power electronics; the eight wheels each have a compact wheel-mounted unit of engine, transmission (fixed reduction) and brake. The front four wheels are steerable. Advantages of the unusual construction with eight wheels are: