The Jaguar XF (internal: Jaguar X260) is a car series from the British manufacturer Jaguar , which is located in the mid Luxury class . The vehicle has been sold since 2015 and followed the Jaguar X250 .In the Euro NCAP crash test awarded 5 out of 5 stars.

The second generation of the XF series was first presented in March 2015 in London . Jaguar organized a tightrope show over the Thames for this purpose .  The vehicle design comes from Jaguar's chief designer Ian Callum .

Outwardly, the X260 is very similar to the first XF generation since its facelift, which took place in 2011. While the wheelbase of the X260 has grown a lot, the automobile as a whole has gotten slightly smaller in terms of length and height. The interior now offers more space in the front and in the rear. 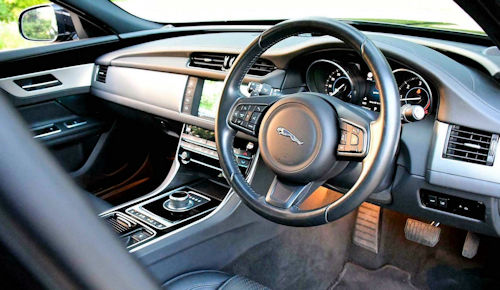 The second generation of vehicles has an aluminum body for the first time (such as Jaguar X351 , Jaguar XE , Jaguar F-Type ). The XF is based on a modular, specially developed iQ [AI] platform, only a quarter of which is the same as that of the Jaguar XE. The X260 has a vehicle weight of 1,710 kilograms, the c w value has improved to 0.26. Versions with rear-wheel or all-wheel drive are available.

The automobile is available in several design lines ( Pure , Prestige , R-Sport , Portfolio and S ), which differ in terms of standard equipment and engine. A 3.0 liter petrol engine and two diesel engines (2.0 and 3.0 liters) were offered at the market launch.

The series XE and XF with diesel engine model year 2016 and 2017 were recalled in May 2016 because there was a threat of fuel loss in the engine compartment and the engine being switched off while driving.

On June 14, 2017 revealed a professional tennis player Andy Murray , the Combi version XF Sports Brake in Wimbledon . Like the sedan, the Sportbrake is built at the Jaguar Land Rover plant in Castle Bromwich near Birmingham . 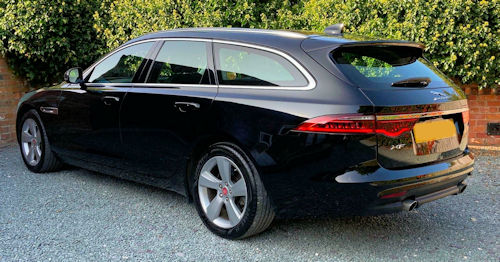