The Jaguar F-Pace (code X761) is an SUV of the British premium manufacturer Jaguar . This is the first model of the brand in this class. It received the full 5 Stars in the Euro NCAP crash test in 2017.

The F-Pace was announced at the 2015 North American International Auto Show in Detroit and presented at the International Motor Show in Frankfurt in September 2015.The day before the show opens to the public,on the September 17, 2015,
a world record is achieved with the car looping a 19m in diameter loop with the SUV, and stuntman Terry Grant being on board The sale in Europe started in April 2016. The design of the F-Pace is based on the 2013 concept car Jaguar C-X17 .

The F-Pace is built at Jaguar Land Rover  Solihull . By taking up production, around 1300 new jobs were created. The success of the F-Pace contributed significantly to the record sales of Jaguar Land Rover in the years after the launch in , since launch, the Jaguar brand alone could record an increase of the total sales by 77 percent.

In 2017, the Jaguar F-Pace was awarded, among other things, the industry award World Car of the Year . The design of Jaguar head designer Ian Callum , based on the F-Type sports car , was awarded the World Car Design of the Year prize in the same year

The Jaguar F-Pace is restyled in September 2020 . The front and rear lights are redesigned The front lights can be fitted with Matrix LED technology.
The hood is modified and now ends on the grille which is enlarged significantly.Inside, the F-Pace is equipped with a new dashboard with a 29cm infotainment screen which has a software system update. 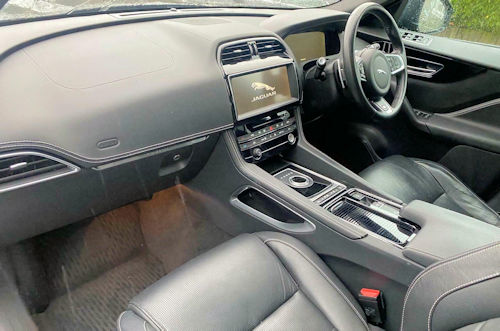 At the New York International Auto Show 2018 Jaguar presented with the F-Pace SVR a performance version of the SUV. It is powered by the well-known from the Range Rover five-liter supercharged gasoline engine, which makes in the F-Pace SVR 405 kW (550 hp). This accelerates the vehicle to 100 km / h in 4.3 seconds. The top speed is Jaguar with 283 km / h. The F-Pace SVR is sold since May 2018.

The British car manufacturer Lister Cars presented in September 2018 the LFP an F-pace based SUV. The LFP is powered by the five-liter supercharged engine, which brings it to a maximum power of 499 kW (679 hp). This should accelerate the vehicle to 60 mph in 3.5 seconds. The maximum speed is the manufacturer with 200 mph.

Limited editions
At the launch of the Jaguar F-Pace, a limited series is offered only for the first year: 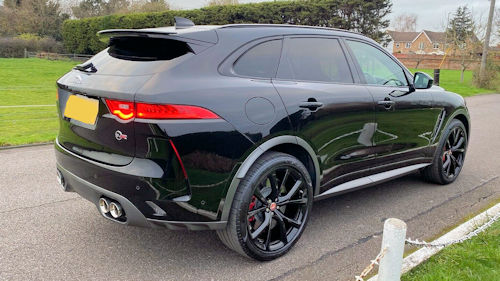