The Jaguar XF (codename: X250) is an executive car produced by British car manufacturer Jaguar Cars which was first revealed in autumn 2007 as a replacement for the Jaguar S-Type.

The XF was developed at Jaguar's Whitley design and development HQ in Coventry and is built at Castle Bromwich Assembly facility in Birmingham. During its development the XF was known by its codename X250.

The XF was launched at the 2007 Frankfurt Motor Show, following the public showing of the C-XF concept in January 2007 at the North American International Auto Show. Designed by Jaguar's design director Ian Callum it was a significant design change from its predecessor. The styling of the finalised production XF varies from that of the C-XF, most notably around the front lights and nose, which incorporates an oval mesh grille harking back to the original Jaguar XJ of 1968. The boot lid retained the S-Type's chromed blade to its edge, but also included a "leaper" Jaguar logo as well.

The interior included some unique features such as the air conditioning vents which are flush-fitting in the dash, rotating open once the engine is started, and a rotating gearshift dial called the JaguarDrive Selector which rises out of the centre console. Another departure from the traditional Jaguar cabin ambiance is the use of pale-blue backlighting to the instruments, switchgear, and around major control panels. Some minor systems, such as the interior lighting, are controlled simply by touching the light covers. The glove compartment also opens to the touch. Unusually the XF has no cloth interior option, with even the entry level model being fully trimmed in leather - even areas that have employed plastic on previous Jaguars. Real wood veneers are available, but have been joined by aluminium, carbon fibre and piano black lacquer trims to create a modern look to the passenger compartment.

Customer deliveries commenced in March 2008, with a range of V6 and V8 engines.

In April 2011, Jaguar revealed the details of a facelift for the XF at the New York International Auto Show, with manufacturing beginning in July 2011.

The XF was launched with a variety of models called, depending on country, 'SE', 'Luxury', 'Premium Luxury' (or 'Premium'), 'Portfolio' (or 'Premium Portfolio'), 'SV8' (or 'Supercharged') and 'R'. For the UK market, company car friendly 'Executive Edition' and 'SE Business' models with a lower tuned versions of the 3.0 L and 2.2 L diesel engines respectively are available. 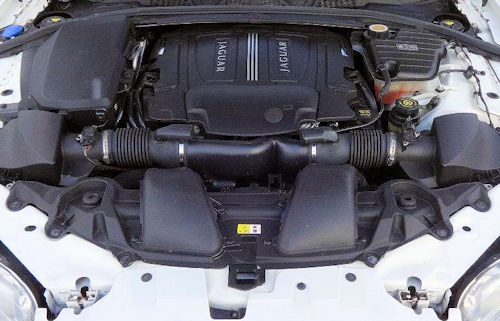 A special version of the XF Diesel S was announced in 2009 for the UK police car market, with the first police force orders in 2010. Its emergency vehicle equipment included a roof-mounted light bar with 3,600 light elements, side alley lights, blue and white strobing LEDs in the grille and blue flashing LEDs along the side of the car, blue and red flashing LED lights in the rear light clusters.

The Sportbrake was formally revealed in March 2012, and went on-sale date in October of the same year. It is available with all of the saloon's engines and has a loading capacity of 550 litres (19 cubic feet) with the seats up and 1,675 litres (59.2 cubic feet) with them folded. The maximum capacity surpasses that of the Cadillac CTS Sport Wagon, and the Mercedes-Benz CLS Shooting Brake. The extended roofline increases rear headroom by 48 mm (1.9 inches) and the rear bench includes a 60:40 split and remote-controlled 'one-touch' folding function. The load area is fitted with multi-function rails and is 1,970 mm (78 inches) long and 1,064 mm (41.9 inches) wide.

An R-S version of the XF was confirmed in 2012 following on from a picture that Jaguar released shortly before the Los Angeles Motor Show. It will use the same 5.0-litre supercharged V8 engine as the XKR-S.

The engine will produce 550 PS (400 kW) and 680 N·m (500 lbf·ft) of torque. It will differ from the normal XFR as it will have bespoke 20-inch Varuna-design alloy wheels, wider front grilles and carbon fibre . The front gills improve aerodynamic efficiency, and does the large rear wing. Combined they to cut lift by 68%. At the back there is a rear diffuser and quad tailpipes.

The suspension is stiffer by 30% and the electronic differential and stability control are reprogrammed to take the extra power.

The car body was developed using Computational Fluid Dynamics (CFD) before the car ever saw a wind tunnel. Every area from the outer skin to the lightweight, composite undertray to the cooling airflow (even the shape of the exterior mirrors) was optimised using this process. The higher, squarer tail is more efficient aerodynamically than a lower, rounded one, and the XF's coupé-like roofline and raised bootlid lip improve airflow over the rear of the car.

The basic sub-structure of the XF has been carried over from the S-Type, although the body has been stretched to meet crash safety requirements, and heightened to provide additional headroom while still retaining the "saloon within a coupé" proportions. The suspension and mountings are the same as that used on the XK, while the engine line-up is basically similar to that used in the S-Type.

Sound and vibration insulation is provided by the addition of a special underbody tray and engine mounts, a tuned exhaust system, and a double bulkhead between the engine bay and passenger compartment.

All XF models are automatic and are Euro 5 compliant. The naturally-aspirated petrol 3.0 V6 was discontinued in Europe in 2010, but continues to be sold elsewhere.

Next Green Car (NGC) an organisation that analyses vehicle emissions and rates them from 0 (cleanest) to 100 (dirtiest) - analysed the emissions from Jaguar's current XF range: ADAC's EcoTest has also rated three of the diesel enginesThe 2.7-litre V6 diesel engine, replaced in 2009 with a new 3.0-litre V6 diesel AJ-V6D Gen III, came in two states of tune. The diesel engines are a product of the joint venture between Ford and Peugeot-Citroën.

The XF was launched with only an automatic gearbox. The six-speed ZF automatic with torque converter lock-up is programmed to shift 10% quicker than before and is fitted to all petrol engines. Diesel engines are fitted with an advanced eight-speed ZF automatic transmission. On both transmissions the gears can either be selected using a rotary dial that rises from the centre console on start-up or can be manually controlled using paddles behind the steering wheel. An AWD option is available in some left hand drive markets, and is only available with the supercharged 3.0L V6 engine. 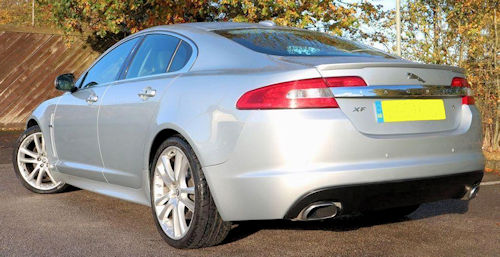