A 9,378-car run of two-door XJ coupés with a pillarless hardtop body called the XJ-C was built between 1975 and 1978. The car was actually launched at the London Motor Show in October 1973.but it subsequently became clear that it was not ready for production, and the economic troubles unfolding in the western world at this time seem to have reduced further any sense of urgency about producing and selling the cars: it was reportedthat problems with window sealing delayed production. XJ coupés finally started to emerge from Jaguar show-rooms only some two years later The coupé was based on the short-wheelbase version of the XJ. The coupé's elongated doors were made out of a lengthened standard XJ front door (the weld seams are clearly visible under the interior panels where two front door shells were grafted together with a single outer skin). A few XJ-Cs were modified by Lynx Cars and Avon into convertibles with a retractable canvas top, but this was not a factory product. Lynx conversions (16 in total) did benefit of powered tops. Both six and twelve-cylinder models were offered, 6,505 of the former and 1,873 of the latter. Even with the delay, these cars suffered from water leaks and wind noiseThe delayed introduction, the labour-intensive work required by the modified saloon body, the higher price than the four-door car, and the early demise promulgated by the new XJ-S, all ensured a small production run.

All coupes came with a vinyl roof as standard. Since the coupe lacked B-pillars, the roof flexed enough that the paint used by Jaguar at the time would develop cracks.More modern paints do not suffer such problems, so whenever a coupe is repainted it is viable to remove the viny. Today many XJ-Cs no longer have their vinyl roof, also removing the threat of roof rust. Some owners also modified their XJ-C by changing to Series III bumpers. This lifted the front indicators from under the bumper and provided built in rear fog lights.

A small number of Daimler versions of the XJ-C were made. One prototype Daimler Vanden Plas version XJ-C was also made, however this version never went into production. 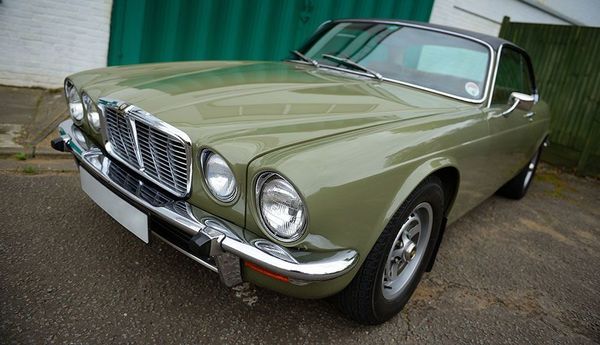