The XJ6, using 2.8 litre (2,790 cc or 170 cu in) and 4.2 litre (4,235 cc or 258.4 cu in) straight-six cylinder versions of Jaguar's renowned XK engine, replaced most of Jaguar's saloons – which, in the 1960s, had expanded to four separate ranges. Apart from the engines, other main assemblies carried over from previous models were the widest version of Jaguar's IRS unit from the Mark X and the subframe mounted independent front suspension first seen in the 1955 2.4 litre with revisions to the geometry.

An upmarket version was marketed under the Daimler brand and called the Daimler Sovereign, continuing the name from the Daimler version of the Jaguar 420.

The car was introduced in September 1968. Power-assisted steering and leather upholstery were standard on the 2.8 L De Luxe and 4.2 L models and air conditioning was offered as an optional extra on the 4.2 L. Daimler versions were launched in October 1969, in a series of television advertisements featuring Sir William. In these spots, he referred to the car as "the finest Jaguar ever". An unusual feature, inherited from the Jaguar Mark X, was the provision of twin fuel tanks, positioned on each side of the boot / trunk, and filled using two separately lockable filler caps: one on the top of each wing above the rear wheel arches. 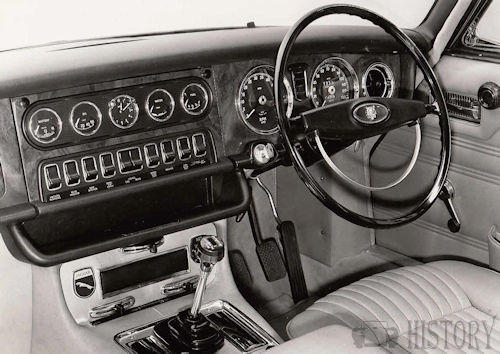 In March 1970 it was announced that the Borg-Warner Model 8 automatic transmission, which the XJ6 had featured since 1968, would be replaced on the 4.2 litre-engined XJ6 with a Borg-Warner Model 12 unit. The new transmission now had three different forward positions accessed via the selector lever, which effectively enabled performance oriented drivers to hold lower ratios at higher revs in order to achieve better acceleration. "Greatly improved shift quality" was also claimed for the new system. 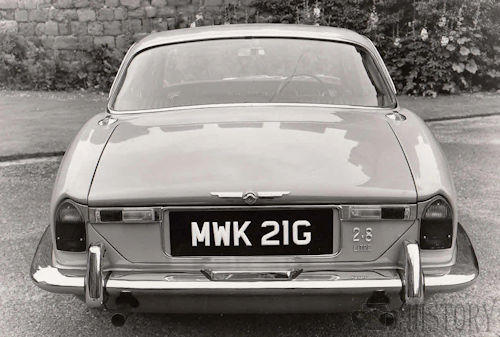 In 1972 the option of a long-wheelbase version, providing a modest increase in leg room for passengers in the back, became available.

The XJ12 version was announced in July 1972, featuring simplified grille treatment, and powered by a 5.3 L V12 engine (coupled to a Borg Warner Model 12), : The car as presented at that time was the world's only mass-produced 12-cylinder four-door car, and, with a top speed "around 140 mph" (225 km/h) as the "fastest full four-seater available in the world today". Although it had, from the car's launch, been the manufacturer's intention that the XJ would take the twelve-cylinder engine, its installation was nonetheless a tight fit, and providing adequate cooling had evidently been a challenge for the engineers designing the installation. Bonnet/hood louvres such as those fitted on the recently introduced twelve-cylinder E Type were rejected, but the XJ12 featured a complex "cross-flow" radiator divided into two separated horizontal sections and supported with coolant feeder tanks at each end: the engine fan was geared to rotate at 1¼ times the speed of the engine rpm, subject to a limiter which cut in at a (fan) speed of 1,700 rpm. The fuel system incorporated a relief valve that returned fuel to the tank when pressure in the leads to the carburetters exceeded 1.5 psi in order to reduce the risk of vapour locks occurring at the engine's high operating temperature, while the car's battery, unusually, benefited from its own thermostatically controlled cooling fan.

3,235 of these first generation XJ12s were built. As with the six-cylinder cars, an upmarket version, this time called the Daimler Double-Six, became available later, reviving the Daimler model name of 1926–1938.