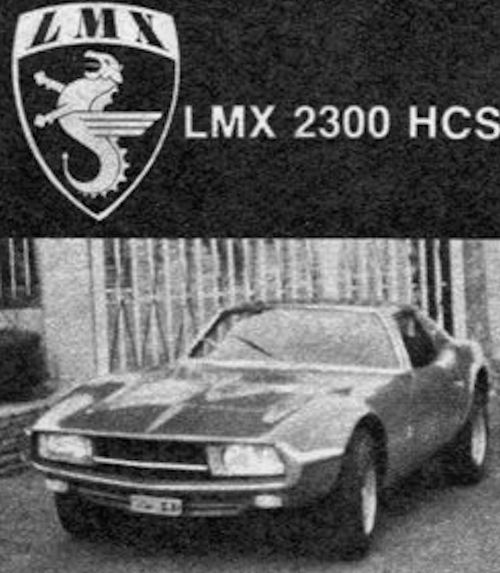 LMX Automobile Srl  was an Italian manufacturer of automobiles .The brand name is LMX .

Michel Liprandi and Giovanni Mandelli founded the company in 1968 and began producing automobiles.  The head office was at Via Bigli 19 in Milan . [2] The Turin Carrozzeria Euro Style , also founded by Michel Liprandi was significantly involved in the construction of the vehicles.  1973 SAMAS from Ricca d'Alba took over the project.

The only model was the 2300 HCS . It was unveiled at the Turin Motor Show in 1968.  Franco Scaglione the body of had combi coupe designed. There was also at least one copy of a convertible .The vehicles had many parts of Ford , including the engine. Successor became the Sirex LMS of SAMAS.

The LMX 2300 HCS was a sports coupe of the Milanese manufacturer LMX Automobile .  The Turin Carrozzeria Euro style was much involved in the construction of the vehicles.

The vehicle was presented in 1968 as a prototype at the Turin Autosalon . At the 1969 Paris Motor Show , the Coupé was designed for mass production.  During the Turin Motor Show of the same year or at the Geneva Motor Show 1969

The vehicle had a central carrier chassis, independent suspension and many parts from Ford .  Thus, came the front suspension with MacPherson struts and transverse links from Ford 20M and the rear trailing arm axle from Ford Zodiac Mk IV .

The body of the coupés designed by Franco Scaglione was made of glass fiber reinforced plastic , only the doors made of steel . striking was the wide B-pillar and the extra-large, frameless rear window in the tailgate.  A special feature for those times was the use of an adhesive from Loctite for attaching the steel hinges of the rear window.  For the Cabriolet also was hardtop available.  Both versions could accommodate two people.

The prototype was a Ford V6 engine with 2000 cc displacement mounted.  In the standard models, there was a larger V6 engine from Ford . The engine with hanging valves  had a displacement of approximately 2300 cc at 90 mm bore and 60.14 mm stroke

The engine power was specified with 108 hp  according to DIN standard  and 126 to 128 hp according to SAE standard On request, the engine power could be brought to 180 hp with a Constantin single-stage low-pressure compressor.Later, the motor was also provided with a turbocharger offered by May and 210 hp. The engine was mounted in the front of the vehicle and powered via a four-speed gearbox and a propeller shaft to the rear axle. The maximum design speed of about 200 km / h and the consumption of 14 liters per 100 km.

LMX produced this model until around 1973 . Successor became the Sirex LMS of SAMAS .  .